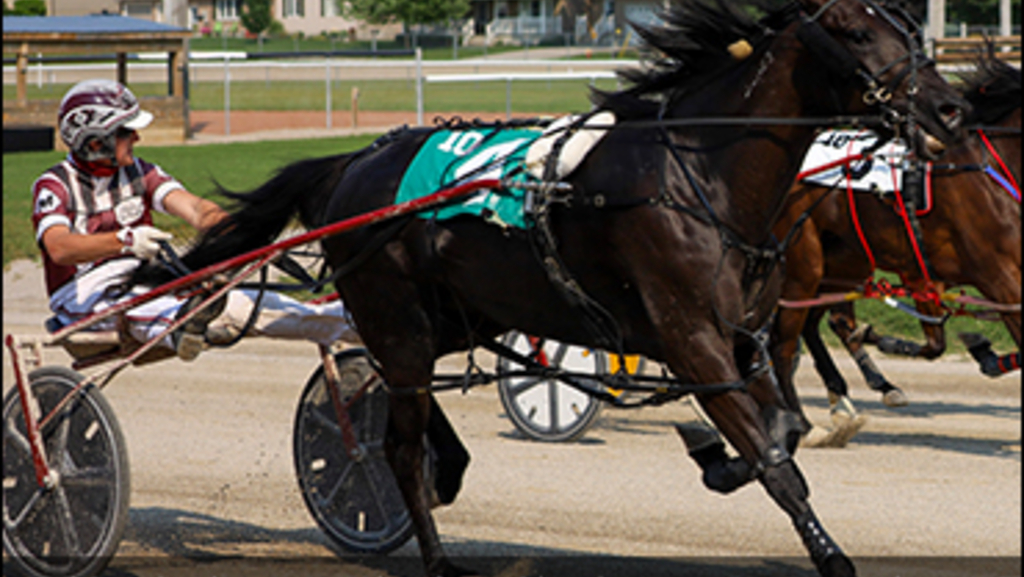 The Saulsbrook Stables' Saulsbrook Olympia ($6.60) overcame a double-digit deficit at the quarter with a powerful three-wide move on the home turn to win Sunday's (July 4) $58,300 Kin Pace Final at Clinton Raceway.

After a wire-to-wire win in her elimination last week, Brett MacDonald was forced to race the three-year-old daughter of Big Jim from off the pace as Jackieofalltrades (Robert Shepherd) and Sports Duchess (Jody Jamieson) sought control of the terms from the inside. While Jackieofalltrades led the field through a :28.3 first quarter, Saulsbrook Olympia found herself fifth and 11 lengths off the lead — but on the helmet of 8-5 favourite A Better Game (Doug McNair). MacDonald's tactics paid off, as he was able to slipstream A Better Game's sustained first-over push into middle sectionals of :59.3 and 1:28.1.

A Better Game headed Jackieofalltrades nearing the home turn, but as the longtime leader countered at the pegs, MacDonald switched Saulsbrook Olympia three-wide around a stalling Better Game for the sprint home. She lifted at first asking, accelerating clear of her rivals by a length to win in 1:56.3. Sports Duchess saved second up the inside over a game Jackieofalltrades.

Saulsbrook Olympia remains perfect this season, having won all four of her starts to date for trainer Brian Lee. In her career, she has won seven times in 10 career outings, and the $29,150 winner's share of the Kin Pace purse lifted her bankroll to $50,021.

The daughter of Archangel, driven by Jody Jamieson for the Hutt Racing Stable and trainer Blake MacIntosh, strode confidently to the lead from post three and travelled unopposed through splits of :29.2, :59.3 and 1:30.1. Through the home turn, Fuzzy Angel began to accelerate, posting a :28.3 closing quarter and passing under the wire four lengths clear of Hadiknownbetter (James MacDonald). 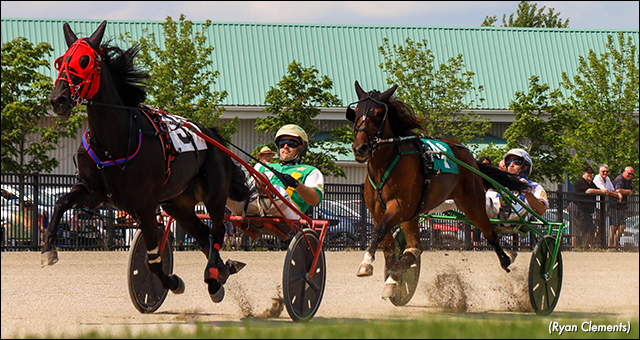 Remarkably, it was Fuzzy Angel's first win in 14 career starts.

“I was starting to wonder if she was ever going to break her maiden,” said trainer Blake MacIntosh with a chuckle. “She’s a nice filly that really likes the half. She can trot the turns better than the straightaways.”

Tipsy In Dixie ($2.90) was the only other victorious favourite in OSS competition, prevailing at odds-on over Century Highness in 2:01.1 in the $21,450 first division. James MacDonald took advantage of three early breakers and gunned the daughter of Muscle Mass to the fore from post seven, rating splits of :30.2, 1:01.3 and 1:32.1 before edging clear to a two-length score over their pocket rival. Harry Poulton trains the five-time winner for Thestable Tipsy In Dixie and Hutchison Harness LLC.

“She is just one of the handiest and best gaited horses you will sit behind. She has tons of gate speed,” said driver James MacDonald, who also guided Tipsy In Dixie to three Grassroots wins last season. “She’s just a real pleasure to drive; makes my job very easy.”

In the $21,450 second division, A Blue Blood ($8.60) responded to a sustained first-over challenge from All Muscle N Sass before then evading a three-wide stretch challenge from 3-5 favourite Fox Valley Liza by 1-3/4 lengths in 2:00.3. Doug McNair drove the daughter of Muscle Mass, now a three-time winner, for trainer Gregg McNair and the partnership of Matthew and Roy Trelford.

"They made a few changes with her hopples and bridle today, and it worked really good,” said McNair, who had called A Blue Blood tricky to drive heading into the race.

The $21,450 final division saw Fortune Tellers K ($45.30) record the largest upset of the 11-race card, working gradually into striking range up the backstretch, inheriting the lead when pacesetter Charmbo Princess broke stride in mid-stretch, and finishing 2-1/2 lengths clear of Larrys Girl in 2:01.4. It was the first career win in 17 tries for the daughter of Angus Hall, whom trainer-driver Donnie Rankin Jr. co-owns with Ralph MacKinley.

COSA TV’s coverage of the Kin Pace and select undercard events appears in its entirety below.