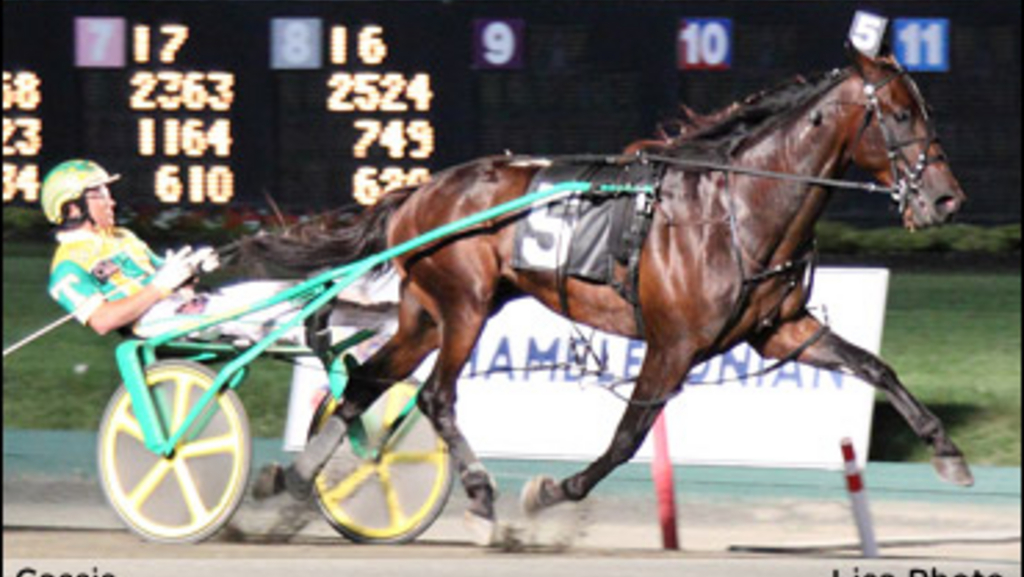 The fields for next week's $1.5 million Hambletonian and $750,000 Hambletonian Oaks for three-year-old trotters are set as the top three finishers and one fourth-place finisher from tonight's eliminations at the Meadowlands Racetrack have been determined

Elimination winners will select their post positions for the final at a live draw and press conference on Wednesday, August 4.

The mile went in 1:53.3, a lifetime mark for the son of Broadway Hall-Bwt Maija.

Flex The Muscle (Ray Schnittker) began the string of trotters early, trying to keep the fractions soft. Hard Livin left with him and sat easily in second. The 2-5 choice, Muscle Massive (Ron Pierce), sat in third and tried to take over but did not complete the task until too late. Pilgrims Taj was closing three-wide and Hard Livin (Yannick Gingras) was swooping in the inside lane.

There were three of them across the stretch at the wire and the 8-1 Pilgrims Taj got first with Muscle Massive holding for second and Hard Livin getting third.

Smedshammer said that he “changed everything” about Pilgrims Taj since getting the colt 10 days before the elim. “We only had a half week but he is an intelligent horse and he got his confidence back.”

“Tonight his attitude came back,” said 'Taj'-driver Mike Lachance, who drove the colt to his frosh victory in the Breeders Crown.

Getting an early spot in third, going first over and successfully putting away 4-5 choice Holiday Road, Lucky Chucky won the second Hambletonian elimination at the Meadowlands on July 31. It was a lifetime-best mile of 1:53.1.

Holiday Road (Brian Sears) looked for his third win in a row by trying to command the race as the leader but on a night when staying on top was a difficult task, he would not be able to hold off Lucky Chucky and John Campbell, even though he went first over just before the 1:25.4 three-quarters.

Mystery Photo (Andy Miller) at 14-1 saved ground to close well and get a berth in the final by finishing second.

Lucky Chucky is trained by four-time Hambletonian winner Chuck Sylvester, who said he was so excited when his colt was chasing down Holiday Road he almost blacked out. “I thought when we got away in third he was going to have to race first over,” Chuck said.

Campbell was very confident. He said, “I thought he was coming into the race well.”

Cassis defied the strong evening bias against horses racing on the front by going to the top and staying there, winning the fastest of three Hambletonian eliminations at the Meadowlands on July 31. The mile went in 1:52.4.

Cassis challenged Temple Of Doom (Dave Miller), who left for the lead in an uncommon move, at the first quarter and sustained a challenge from Pretty Boy Lindy (George Brennan) around the second turn.

Temple Of Doom held on for second, dismissing Wishing Stone (John Campbell), who was finally going a whole race on stride, closing well to be the third-place finisher.

On The Tab (Yannick Gingras) was the richest fourth-place in the final elim and makes the final.

Trainer Ray Schnittker said, “He has been racing a lot but he is still coming on strong. He is handy and hopefully next week [in the final] he will get a good trip.” Schnittker said he wasn’t worried about being on top next week because his colt “can race well from behind, too.”

Cassis, who was the favoured son of Cantab Hall-Dirty Martini, is co-owned by Schnittker, Kelks Inc. of Lockport, Arden Homestead Stable of Delhi and Jerry Silva of Long Beach, New York.

Seasoned and ready in the first and fastest $35,000 Hambletonian Oaks elimination at the Meadowlands on July 31, Poof Shes Gone soared late in the stretch to win the first of three elims, making next week’s final. 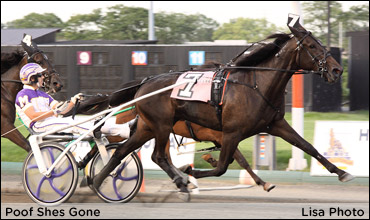 She came strong late, as trainer Richard Norman says she likes to race. “She loves to wind up in the stretch,” he said. 'Poof' won in a lifetime-best 1:53.1 despite fractions set mildly by Bar Slide (Tim Tetrick).

That one had three lengths over the field in the stretch but Poof Shes Gone, four-wide, had David Miller flying with her to win. Bar Slide held second while Bramalea Hanover (Ron Pierce), sent away at 16-1, also closed and took third.

Norman also said that 'Poof' was racing after an easy week since she was “not a hundred-percent healthy since coming in from Canada.”

“She felt good in the last turn,” said Miller, “and this is the best she has raced in a couple of starts.”

Melvin Hartman of Ottawa, ON, Herb Liverman of Miami Beach, David McDuffee of Delray Beach, Florida and John Fielding of Toronto, ON own the daughter of Kadabra-Travelin Superlite.

Springtime Volo Blooms In The Stretch

Springtime Volo started to close in on the field at three-quarters and challenged Southwind Samurai (John Campbell) four-wide to win the second Hambletonian Oaks elimination at the Meadowlands on July 31. The time for the mile was 1:54.3.

At the finish line, Southwind Samurai broke but remained in second by the judges’ ruling that she complied with the breaking rule. In The Mean Time (Dave Miller) finished third by closing late to earn a berth in the final.

Levis Lady (Dave Palone) left fast to lead in a slow first quarter and Costa Rica (Ron Pierce) found a good spot but once Southwind Samurai took over it was a chase, especially for Springtime Volo, who sat sixth during the early shuffling.

Levis Lady and Crown Laurel (Mike Lachance) broke and Springtime Volo made the mad dash with George Brennan to get to the top first.

“The breakers actually helped me,” Brennan said. “we had a lot of ground to make up to get ‘Springtime’ and they helped clear the way.”

Trainer Jan Johnson said Springtime Volo is a nice filly, she just “has had to prove it a little more. She was shuffled back at the half but she likes to come on late.”

Unraced since May, Boinga blew out in the final lengths of the stretch to win the third Hambletonian Oaks elimination at the Meadowlands on July 31, winning in 1:54.4 as a 36-1 shot.

Behindclosedoors (Tim Tetrick) and Cantab It All (Daniel Dube) started the field racing into a slow :28 quarter while favourite Ultimate Cameron (Trevor Ritchie) had to grind to get the top but she got there and cut another slow quarter, going the half in :57.

Trainer Brian Roland thought Boinga would be good tonight. He said, “We had some trouble bringing her back but she was good tonight.”

“I thought I had a chance in the last eighth,” said Pierce. “I didn’t think they looked strong up front.”

Anthony and Carol Risi of Christiana, Pennsylvania and Bernard O'Brien of Lecanto, Florida own the Wingsongs Legacy-Melody Of Love filly.

Fashion Feline, who finished fourth in line to Brian Sears in the second elim, got a berth in the final being the highest earner of the three fourth-place elim finishers.

(With files from Hambletonian Society)