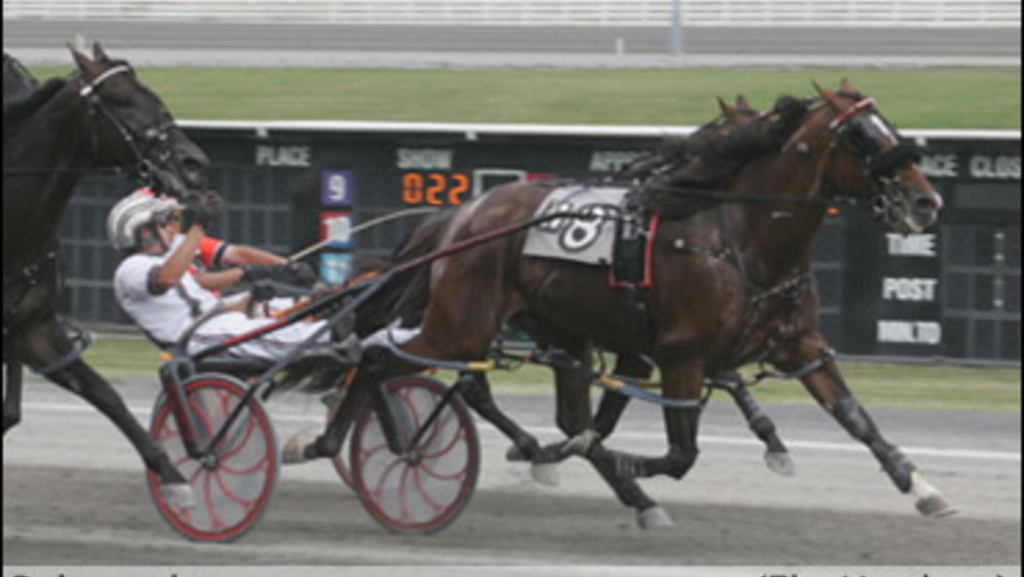 Passed and apparently exhausted from leading the field through a grueling three-quarters in 1:20.3, 17-1 Delmarvalous reached deep, found more and won Saturday’s $500,000 final of the Delvin Miller Adios at The Meadows in improbable, dramatic fashion

Six horses were within 1-1/4 lengths of Delmarvalous, but he and Brian Sears were able to hold off the wide Versado, the 7-5 favourite who had trouble keeping up with cover until finding his best stride in deep stretch, by 1/2 length. Pang Shui was third, a half-length back in the Lightning Lane.

The victory, the first of the year for Delmarvalous in nine starts, was worth $250,000 to Badlands Racing, George Teague, Jr., Elmer Fannin and Howard Dorfman, who own the Badlands Hanover-Prymetyme Scootie colt.

At two, Delmarvalous won eight of 11 races, including a Gov. Lawrence division at The Meadows on 2009 Adios Day, and appeared to be headed for national prominence. Despite his sluggish start at three, trainer George Teague, Jr. refused to diss him.

“He hasn’t been very lucky,” Teague said. “He’s had some bad trips, and he’s a little bit hot, a little bit hard to control. So we opened him up, made a couple changes where we tried to find a happy medium where he’s quiet enough to govern his speed a little bit but still keep him moving forward.”

For all that, Delmarvalous seemed up against it when he drew Post 8, with plenty of speed inside him, plenty of speed outside him, including Rockin Image, winner of the fastest elimination, in Post 9. Indeed, when Delmarvalous was forced to blaze the first quarter in an almost unthinkable :25.4, it seemed only a matter of time before the cavalry closed in.

That’s what Brett Miller thought when he pulled the pocket with We Will See before the three-quarters. We Will See edged nearly a length in front before Delmarvalous unleashed his marvelous rally to win in 1:49.2.

“I thought I was a winner,” Miller said. “I followed that colt last week, and I felt like I went by pretty easily. With those fractions Sears was going, I thought when I got by him I was the winner. Give Delmarvalous all the credit. You hardly ever see horses at this track go fractions like that and win.”

Sears, however, was not as surprised by his colt’s determination.

“He’s been a real game horse,” Sears said. “He’s been passed before and fought back, although he’s never taken them through fractions like that. He’s a speed horse—that’s what he likes. He’s been a little outclassed by horses a little better, so he hasn’t been able to make the front. He’s supposed to be the type of horse you saw today.”

Teague indicated Delmarvalous will race next in the Battle of Brandywine and has the Little Brown Jug in his sights.

“To be honest, that kind of speed is not his game. We’d have been better off if the fractions were slower and he had his nose on a helmet. He needs to out-grit horses, to be in position where David can out-drive drivers. But he has the Jug and a few other big races left. We’re having fun with him and winning money. That’s what it’s about.”

Dancin Barefoot twirled up a storm in Saturday’s $227,913 Arden Downs stake for three-year-old pacing fillies at The Meadows, taking the fastest division in a career-best 1:51.4.

Entering the Adioo Volo off a strong place finish in the Tarport Hap, Dancin Barefoot made a decisive quarter-pole move and had little trouble from there. The daughter of Rocknroll Hanover-Wishforafullhouse scored by 1-1/2 lengths over Full Picture, with O Lucky Me third.

“The first couple times I drove her, I thought she was the best horse in the race, but we just couldn’t get it done,” Gingras said. “Today, it was a tough first quarter, but the second quarter was soft, and after that, she made it look easy.”

The lightly held Farouche Hanover, dismissed at 30-1, rushed to the lead from Post 8, picked up valuable cover and had plenty left for the drive, taking her division in 1:53.3. Western Royalty was a half-length back in second, with I Lady third.

Northwest Hanover dueled with Sand Gesture for much of the mile, swapping leads until Northwest Hanover proved stronger in the stretch. She outkicked her rival by 1-3/4 lengths in 1:53.4, with Its De Lovely a rallying third.

Saturday’s exciting Adios card also provided a showcase for some of harness racing’s finest young talent through this event known as the Gov. David L. Lawrence. Trainer George Teague, Jr. captured the Adios with Delmarvalous, and if the Gov. Lawrence is any indication, Teague will be loaded next year as well.

Wink N Atcha was the most impressive winner, scoring wire-to-wire in a swift 1:52.1, only a tick off the track record for freshman colt and gelding pacers. He prevailed by two lengths over Reckless Ric, yet another Teague trainee, with Kings Masterpiece earning show dough. George Teague, Jr. Inc., Ted Gewertz, Gustis Teague and Paisano Stable own the Dragon Again-Kiss My Lips colt, who now is undefeated in four career starts.

Roger Hammer, whose stable perennially is rich with promising freshmen, made his presence felt with Twilight Artist, a Real Artist-Anza Hanover colt he trains and owns with Vicki Fair. Twilight Artist was on the engine early for Gingras, scoring in 1:53.1 for his fourth victory in five career outings. Stress Test was second, 1-3/4 lengths in arrears, with Pangali third.

“When I drove him at Chester last week, he raced well, but today he was much better,” Gingras said. “You can tell it’s a Roger Hammer-trained horse. I think he’s going to be a strong horse for quite some time.”

Big Bad John didn’t perform acts of heroism in a caved-in coal mine, but he was sharp nevertheless, making the winning move for Brian Zendt at the half. He went on to score in a lifetime-fastest 1:53.3, with Expect Success three lengths back in second and Fancy Footwork third. Ron Potter trains the son of Western Hanover-Trulyawork Of Art for Winchester Baye Acres.

“I’ve driven him twice this year, and it seems like he never gets tired,” Zendt said. “We probably could have made a move to the front sooner, but I knew he would have a lot left down the stretch.”

It was Zendt’s 41st career stakes victory at The Meadows, moving him into a tie for 16th place all-time with...Bill Zendt, his father.