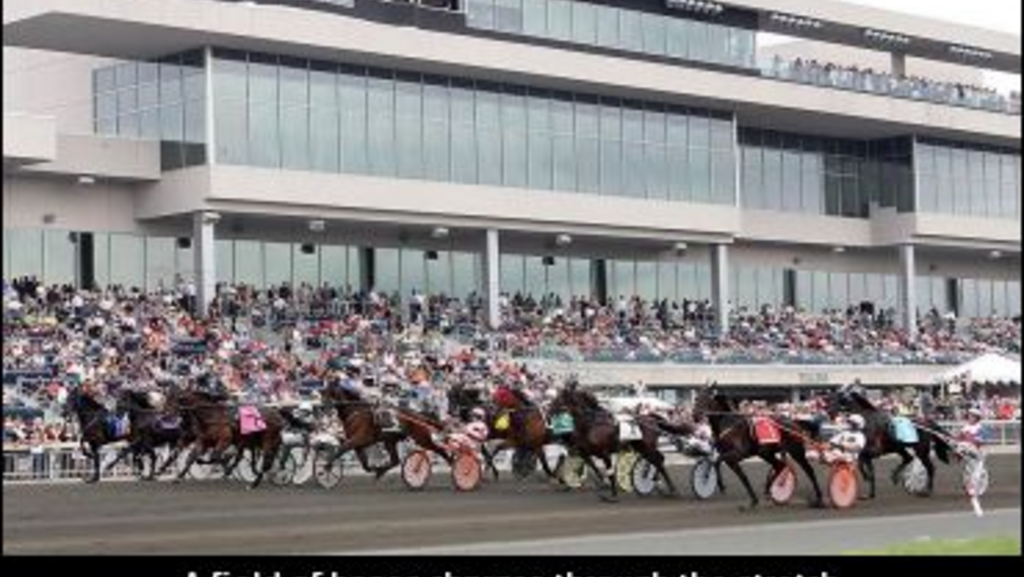 Several racetracks around North America have hosted lucrative evenings gathering harness racing’s finest, but the summer stakes season will climax on Saturday (August 3) with a 16-race card highlighted by the $1-million Hambletonian.

The 94th edition of the August classic serves as the final year for the two-heat format. Sixteen three-year-old trotting colts dropped into two eliminations carded as Races 8 and 9 with the top five advancing to the final later in the program, slated for Race 12.

Among the Melander brigade, Gimpanzee will attempt to stay undefeated when he starts from post 7 alongside his stablemate Green Manalishi S in the first Hambletonian elimination. The Dan Patch two-year-old of the year has won all 12 of his starts while earning over $750,000 for owners Courant Inc. and S R F Stable. Brian Sears will sit in the bike.

One of Melander’s other top Hambo prospects, Greenshoe, starts from post 5 in the second elimination. The Father Patrick colt enters off a lifetime-best mile in the Stanley Dancer Memorial, trotting in 1:50.1 under wraps to win by over three lengths. Brian Sears will also sit in the bike behind the Hambo contender for owners Courant Inc., Hans Backe, Lars Granqvist and Morten Langli.

Dont Letem, who won the Peter Haughton Memorial in a stakes-record 1:51.4 last year, flanks Greenshoe from post 6. The son of Muscle Hill galloped when against Greenshoe in the Stanley Dancer Memorial but rebounded with a 1:50.2 mile in the $81,200 Reynolds Memorial last week at the Meadowlands. Yannick Gingras will sit in the bike behind the Nancy Johansson trainee for owners Brittany Farms, Christina Takter, John Fielding and Herb Liverman.

The $500,000 Hambletonian Oaks goes as a co-feature before the main event. Millies Possesion, who won her elimination in 1:52.3 to remain undefeated, goes as the 9-5 favourite in the final from post 2. Trainer Jim Campbell will try for his second victory in the Oaks since Broadway Schooner gave him a win in 2009. Dexter Dunn, now in his first full year driving in North America, will make his debut in the classic for owner Fashion Farms LLC.

When Dovescry took the other elimination of the Oaks and went a quicker time when drifting through the stretch in progress to a 1:51.3 victory for the Allard brothers. Driver Simon and trainer Rene will start the Muscle Hill filly from post 5 in the final for owners Go Fast Stable, Yves Sarrazin, Kapildeo Singh and Lawrence Dumain.

The first stakes event on the Hambletonian card goes as Race 4 with 10 two-year-old trotting fillies aligning for the $310,700 James Doherty Memorial. Hypnotic Am—trained by Marcus Melander for owner Courant Inc.—fronts the field off a 1:53.3 victory in her elimination while kicking to the finish in :26.4. Brian Sears sits behind the Chapter Seven filly who will try to stay unbeaten from four starts.

Solsbury Hill, the other elimination winner, draws post 1 again after surprising at 9-1 off a pocket ride last week from the inside spot. The Andrew Harris-trained daughter of Muscle Hill broke her maiden when winning the elimination for owners Howard Taylor, Rojan Stables and William Donovan.

The frosh colts follow in the $324,550 Peter Haughton Memorial Final. Real Cool Sam—out of the swift mare Cooler Schooner—starts from post 4 after winning the faster of the two eliminations. The Jim Campbell trainee for Fashion Farms LLC trotted a lifetime-best mile of 1:54.1 while overcoming post 9 in his elim. David Miller will drive the gelding as he tries to stay unbeaten in five starts.

Synergy, who won the other elimination, starts alongside Real Cool Sam from post 3. The Per Engblom-trained son of Father Patrick has won both of his starts, taking his elimination of the Haughton in 1:54.4 a week after scratching sick from a division of the Kindergarten Series the week before. The colt races for owners Brittany Farms LLC, John Fielding, Herb Liverman and David Anderson.

The big four fillies congregate for the $100,362 Shady Daisy final. Warrwee Ubeaut, off three-straight losses in stakes, starts from post 2 for trainer Ron Burke and Yannick Gingras while Tony Alagna trainee Tall Drink Hanover—who upset Warrawee Ubeaut in a division of the Adioo Volo, starts from post 4. Stonebridge Soul—entering off three-straight victories including in the James Lynch Memorial, Mistletoe Shalee and Adioo Volo—neighbors Tall Drink Hanover from post 5 and inside of the other Tony Alagna pupil Treacherous Reign, who won the $340,500 Fan Hanover.

A group of 12 aged pacing stallions gather for the $230,200 Sam McKee Memorial, which is the only aged event going an added distance on the card. Mcwicked, who recently became the highest-earning pacing stallion of all time with $4.2 million banked, starts from post 2 in the mile-and-an-eighth event off a 1:50.4 victory in the $260,000 Joe Gerrity Memorial. The Casie Coleman trainee has Brian Sears in the bike while defending champ Western Joe starts from post 10.

Lather Up, who equaled the all-time fastest mile in harness racing in the Graduate Final and beat Mcwicked in the William Haughton Memorial, will have to overcome post 9 in the added-distance event. Montrell Teague returns to drive the Clyde Francis trainee as the four-year-old son of Im Gorgeous enters off a 1:49.4 qualifier at the Meadowlands with a :25.4 final quarter.

Free-for-all trotting stallions return to the mile distance for the John Cashman Memorial. Last year’s winner, Marion Marauder, draws post 1 in the 10-horse contest off a 1:50.4 runner-up finish to Manchego in an overnight at the Meadowlands. The six-year-old son of Muscle Hill and 2016 Hambletonian champ has Scott Zeron in the sulky for trainer Paula Wellwood and owners Marion Wellwood and Devin Keeling.

Crystal Fashion, off an upset win in the Hambletonian Maturity, will try from post 7 to uproot Marion Marauder’s crown in the Cashman. Guardian Angel As, who has won several aged trotting stakes this season off the Grand Circuit, also poses a threat from post 2 along with post-4 starter Eurobond following a world-record mile of 1:50.1 posted last week in a conditioned trot.

Free-for-all trotting mares, void Atlanta, compete in the $186,000 Dr. John Steele Memorial in the first race following the Hambletonian. Last year’s Oaks winner Manchego starts from post 1 off a 1:50.1 mile in an overnight last week at the Meadowlands. Dexter Dunn will drive the Nancy Johansson trainee with over $1.6 million in earnings.

Hannelore Hanover returns to her division after trying to race against the guys in the Cashman last year. The seven-year-old Swan For All mare starts from post 6 with Yannick Gingras driving for trainer Ron Burke following a 1:50.2 victory in a preliminary of the Miss Versatility series. The mare owned by Burke Racing Stable, Weaver Bruscemi, Frank Baldachino and Jerry & Theresa Silva Stables also nears $3 million in earnings.

Shartin N looks to continue her dominance of the mare pacing division when going in the $183,500 Lady Liberty final. The winner of 37 races from 49 starts and over $1.7 million in earnings enters off a 1:49.1 victory in the $100,000 Clara Barton Pace at Plainridge Park and will have regular driver Tim Tetrick in the bike for his LLC, Richard Poillucci, Joanne Looney-King and trainer Jim King Jr.

Following their speed fling in the Meadowlands Pace, Captain Crunch and Bettors Wish meet again in the final stakes event on the program: the $285,362 Cane Pace. Bettors Wish—conditioned by co-owner Chris Ryder for partners Fair Island Farm and Bettors Wish Partners—lost the Meadowlands Pace by a head after parking the mile through quick fractions. The son of Bettors Delight is the highest-earning sophomore pacing colt this year and will look to cement himself atop the ranks with Dexter Dunn in the bike.

North America Cup-winner Captain Crunch starts wide of Bettors Wish after setting most of the quick fractions in the Meadowlands Pace. The son of Captaintreacherous—with over $1.1 million earned—settled for fourth in the Pace final after posting a :52.4 half and three-quarters in 1:19.3—which differed from the stalking trip he went when winning the North America Cup. Scott Zeron will try to steer the Nancy Johansson trainee to a rebound performance for owners 3 Brothers Stables, Christina Takter, Rojan Stables and Caviart Farms.

The first race of the 16-race cap to the Meadowlands’ championship meet will go at 12:00 p.m. To view the entries for Saturday's card, click the following link: Entries - 2019 Hambletonian Day Card

2yo racing events(Breeders Crown) are later on in the year, maybe in Oct/Nov.

Bob McClure is the only

Bob McClure is the only driver from the Woodbine Mohawk circuit to drive that day? Everytime there's major stake races at Woodbine Mohawk park, there's a tsunami of US based drivers coming to Ontario.

Why isn't Atlanta entered in

Why isn't Atlanta entered in either The Cashman or The Steele? And why are there no events for 2yo pacers?