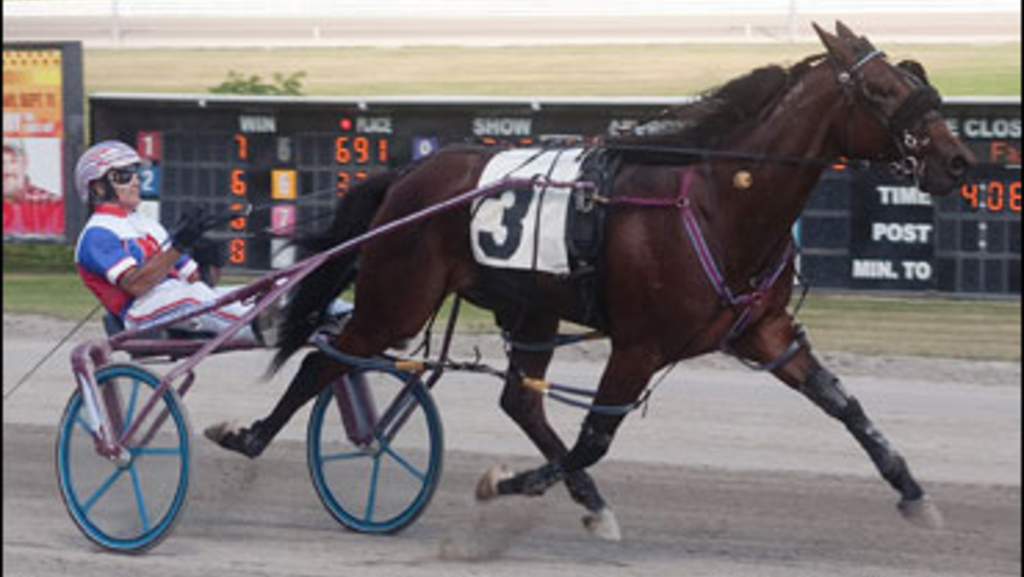 The Canadian-owned Alsace Hanover delivered a flawless world record performance in the 45th edition of the $500,000 Delvin Miller Adios at The Meadows Racetrack & Casino on Saturday afternoon

The 6-5 favourite and three-time Adios winner Ron Pierce advanced first over and opened up multiple lengths on the field to score in 1:48.3, lowering his own world record for three-year-old pacing geldings on a five-eighths mile track, that he set in his elimination last week, by one-fifth of a second.

Powerful Mist (Dave Palone) worked his way to command after leaving from post position four and cleared in front of inside starter and elimination winner Custard The Dragon (Montrell Teague) during a :26.1 opening quarter. As the field moved in front of the grandstand, Pierce sent Alsace Hanover first over from fourth and continued to advance on the outside down the backstretch. The gelded son of The Panderosa-Arts Masterpiece took over before the 1:20.3 three-quarters mark and kicked away from the field by three and a half lengths for the career-best 1:48.3 score. Custard The Dragon and Real Special (Yannick Gingras) finished second and third respectively.

The time of the mile was just two-fifths of a second off the overall male record for three-year-old pacers, set last week by Custard The Dragon in his elimination.

“Coming first up didn’t bother him a bit,” said Pierce after the victory. “He’s a very powerful animal. He could have gone faster today.” 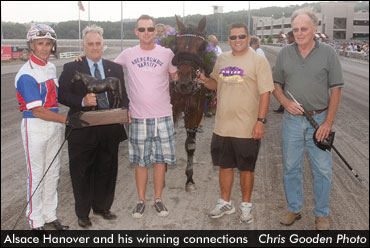 “I thought he’d be every bit as good as he was last week,” said the conditioner. “When we train him, it seems like his energy is endless. Scott Zeron, who’s been driving him regularly, says he’s always pacing at the wire. So I think he was ready for this.”

After earning two wins in Pennsylvania Sires Stakes action from seven starts and banking over $90,000 as a freshman, the $20,000 Harrisburg Yearling Sale purchase finished second in the Hoosier Cup and has recorded six wins in nine starts this year to push his bankroll over the $500,000 mark.

“You probably won’t see him for about a month because he doesn’t have much between now and September,” said O’Sullivan. “He has the Battle of the Brandywine, which he’ll probably miss. But after that, he has the Breeders Crown, the Matron, the Progress, and we might take a shot at the American National.”

Trainer George Teague, Jr. was gunning for his second consecutive Adios title -- he won last year with Delmarvalous -- while son Montrell, 20, was hoping to become the youngest driver to win an Adios final. (That honour currently belongs to John Campbell, who scored at 29 with Andrel in 1984.) Neither Teague reached his goal when Custard The Dragon finished second, but Montrell expressed satisfaction with the outcome.

“I got behind the horse I wanted to get behind,” he said. “He didn’t carry me as far as I wanted him to. But I’m happy my horse raced well and came out of the race well.”

Gingras was similarly pleased with his show finish with Real Special.

“Out of the gate, I almost took a shot for the lead,” said Gingras. “But my horse can be a little bumpy in the turns. I think I got as much as I could get.”

Foxy Lady put away the field with a swift third quarter and went on to capture a division of Saturday’s $181,000 Quinton Patterson Adioo Volo at The Meadows. Whats New Pussycat rallied late to take the other division of the Grand Circuit pace for three-year-old fillies.

The race, sub-feature of the Delvin Miller Adios card, is named for the late Quinton Patterson, longtime grandstand manager for The Meadows who was considered the track’s first employee when it opened in 1963.

Foxy Lady reached the front with a quarter-pole for Yannick Gingras, but had little time for a breather, as Dave Palone sent Fresh Idea hard after the leader. Foxy Lady repelled that challenge with an impressive :27.3 third panel and triumphed in a career-best 1:51.1. Cold Mist, using Lasix for the first time, rallied for second, two and a hald lengths back, with In Deep Thought third.

“Off the slow first quarter I wanted everybody to settle and be where he wanted to be,” Gingras said. “I wanted to be the last one to the front. There was no doubt when I pulled that we would take our shot from there. She likes to be on the front, no doubt about it. But when you’re even money, that makes it an easier decision to take the lead.”

Whats New Pussycat was parked most of the first quarter before finding the pylons for David Miller. On the front, Southwind Jazmin was strong enough to thwart the early challengers, giving Whats New Pussycat a chance in the lane. The daughter of Art Major-Molly Can Do It made the most of it, roaring by to nail Southwind Jazmin by a head at the wire in 1:51.4. Honky Tonk Woman finished third.

Trainer Nicholas Surick acquired Whats News Pussycat at the start of her sophomore campaign for JL Benson Stables and KDN Stables. The $96,000 purchase price was responsible, but Whats New Pussycat has earned more than $180,000 this year and remains eligible to many rich season-end stakes.

“She has a little trouble in the turns -- she has poor conformation behind and struggles in the turns on smaller tracks -- but she goes as best she can and flies in the straight-aways,” Surick said. “She’s staked pretty heavily through the rest of the year. She’s a diamond in the rough.”

Nobody has yet been able to successfully fight I Fought Dalaw, as the son of Western Ideal equalled the track and season’s record of 1:52 in one of six $20,000 divisions of the Arden Downs Pace for baby colts and geldings to remain undefeated in four lifetime starts.

Already the fastest two-year-old overall in 2011 after his 1:50.4 win in the NJSS, I Fought Dalaw was moved to command near the half by driver David Miller, then stormed home in :27.2 to remain unblemished for trainer Sam DePinto and owners Shannon DePinto, Mike Parisi, and Jerry Silva.

The "hometown colt," Sweet Lou, is also undefeated in four starts, and also has a share of The Meadows’ 1:52 track record for his division, after using a :26.4 kicker to withstand a determined Pet Rock in a later Arden Downs cut. The son of Yankee Cruiser, who also posted a personal best, is conditioned by locally-based national star Ron Burke, and the frequent combine of the Burke Racing Stable and Weaver Bruscemi here co-owns the talented youngster with the partnership of Lawrence Karr and Phillip Collura.

Ideal Ike made a second move to command at the five-eighths, then repulsed a determined late bid by A Rocknroll Dance to take the first Arden Downs division in 1:53.1, a personal mark. Also a son of Western Ideal, the winner was driven by Andy Miller for trainer Matt Cox and owner-breeder Don R. Van Witzenburg and his ownership partner George Golemes.

The McArdle gelding Mc Attaboy continued his development while moving his record to four-for-five with a 1:54 grinding victory in another Arden Downs cut. Sam Beegle, president of the PHHA, “went west” and got all the money for his Ginger Tree Stable, Neil Chesen, and Wayne Hurtubise.

Easy Again surely raised some bloodpressures when he broke at 1-10 in the final Arden Downs race, but after he caught, he produced devastating speed to circle the field from last en route to a 1:53.4 victory. The Dragon Again colt was handled by Montrell Teague for father George Jr., co-owner with the Kovach Stables LLC and Ted Gewertz.

Trick Man, blocked with pace in last year’s Adios at 59-1 while losing by only one and a quarter lengths, shot six-wide in the stretch at 60-1 and just caught a tenacious Foiled Again in another blanket finish to take one of four $50,000 Open events for older horses, Pennsylvania-preferred. Ray Paver Jr. trains and drove the son of Mantacular to a 1:49.3 new track record for four-year-old pacing horses for owner-breeder Ronald Brechler.

Local track recordholder Sir Caviar was in control throughout the Open Trot, passing the wire in 1:54 for driver Brian Zendt. The five-year-old gelding is trained by Leslie Dunn Zendt in conjunction with Bill Zendt – a literal marriage of two of the royal families of western Pennsylvania harness racing.

Didrickson, at one point sixth over in the Fillies & Mares Open Pace, relentlessly ground forward and just caught Jans Luck in the shadow of the wire, taking a new mark of 1:52. The Keystone Raider mare posted seasonal triumph number ten and ran her career bankroll over $200,000 for co-breeder/owner Kelly Goodwin and trainer Paul Kennedy.

Driver Brett Miller then completed a back-to-back sweep of the distaff Opens when a backstretch brush with Mystical Starlight moved her past her trotting foes en route to a lifetime speed badge of 1:53.4. A Credit Winner mare out of the Ross Croghan stable, Mystical Starlight is owned by Glen Hobin of Stittsville, Ont.