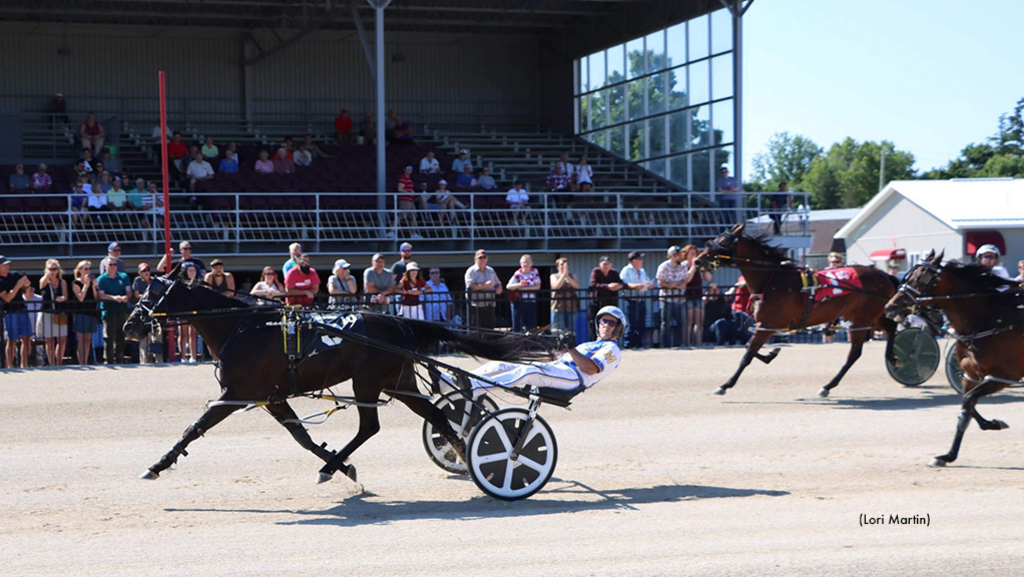 After controlling the fractions in the eliminations, a wave of early leavers forced driver James MacDonald to take an early hold and settle Velvet Stinger into the open four hole. Her stablemate, Raptors Won, took the early lead and threw down wicked early fractions of :27.2 and :55.4.

After no movement to the half, Warrawee Xpat and driver Brett MacDonald moved first up to challenge the race leader as they entered the backstretch for the second time, setting up a second over trip for post time favourite Velvet Stinger. James MacDonald made the three wide move with Velvet Stinger around the final turn and accelerated past leader Warrawee Xpat to capture the Kin Pace Final in 1:54.3, tying the all-aged fillies and mares track record.

“It’s fun anytime you can win a signature race and see a good crowd with kids cheering everyone on, it’s special,” said MacDonald. “Now I have the Kin Pace off my bucket list.”

The Nick Gallucci trainee took advantage of a shoeing change prior to the race.

“I switched her from steel to aluminum to try and get her gait a little lower,” said Gallucci. “She was interfering, bringing her right front foot into her left knee. Now it seems like she’s starting to go underneath her knee which is very beneficial to her gait.”

After going winless in her two-year-old campaign, Velvet Stinger has won five of six starts this season and the $25,250 winner's share of the Kin Pace purse lifted her lifetime bankroll to $73,167 for owner Millar Farms.

The replay of COSA TV's coverage for the Kin Pace is available below:

On the Kin Pace undercard, OSS Grassroots action began in Race 3 with John Bax trainee Darbyshire winning. James MacDonald navigated a start that saw multiple trotters go off stride out of the gate and sat in the pocket until the stretch when he popped out and passed Sayonara Royalty who had led until that point.

“It was a very interesting start. Babies on that track, and first lifetime start is very tricky,” said MacDonald. “Team Bax had told me he was good gaited, and they were spot on. We were rolling along, and he sat comfortably. When I tipped him, he knew exactly what to do.”

Timonier won the second Grassroots going off a 13-1. Driven by Brett MacDonald from post five he worked his way to the lead by the quarter pole and fended off challenges from Muscle Line (Muscle Up The Goal) and Hasty Bid (My MVP) to win in a photo.

Trainer Ashleigh Hensley has more than 400 wins in her career, and her husband Ed has piloted horses to over $35 million dollars in winnings, but the pair combined for a special victory on July 3 at Clinton Raceway when their first homebred won the third Grassroots division for two-year-old trotting colts.

Leaving from post two Floyd The Freak settled into second around the first turn, and Ed popped him from the pocket to take the lead before the quarter-mile pole and set an opening panel of :30.2.

Bob McClure made a move with Tuscan Prince (Kadabra) just past the half-mile, but he could not track down Hensley’s son of Archangel, who led the entire way and closed in :29.0 to win by a length.

“We raised him, so Ed knows everything about him,” said Ashleigh. “So, he thought he would give him a shot because he had a good post position and was training well. I thought he did everything right and looked good today.” 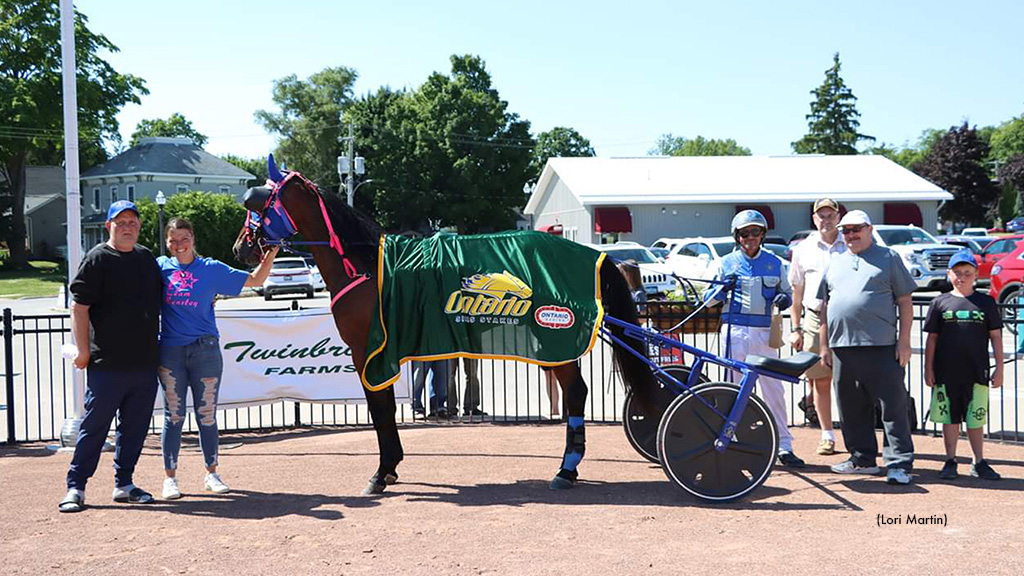 Floyd The Freak is out of ABC Garland mare Escuela, who the Hensley’s raced throughout her career, and purchased in the fall of her six-year-old campaign. From October 2016 onward she made 62 starts for them, posting a record of 6-8-9 and earning over $92,000.

“She was good to us. That is why we decided to keep her and breed her,” said Hensley. “Now we have three colts out of her, and (Floyd The Freak) is our first homebred, so it’s pretty special to us.”

The Kin Pace race card was well supported by fans and horseplayers with over $82,000 pushed through the windows. Live racing returns to Clinton Raceway on Sunday, July 10th, post time at 1:30 p.m.