Fear The Dragon Ferocious In Adios 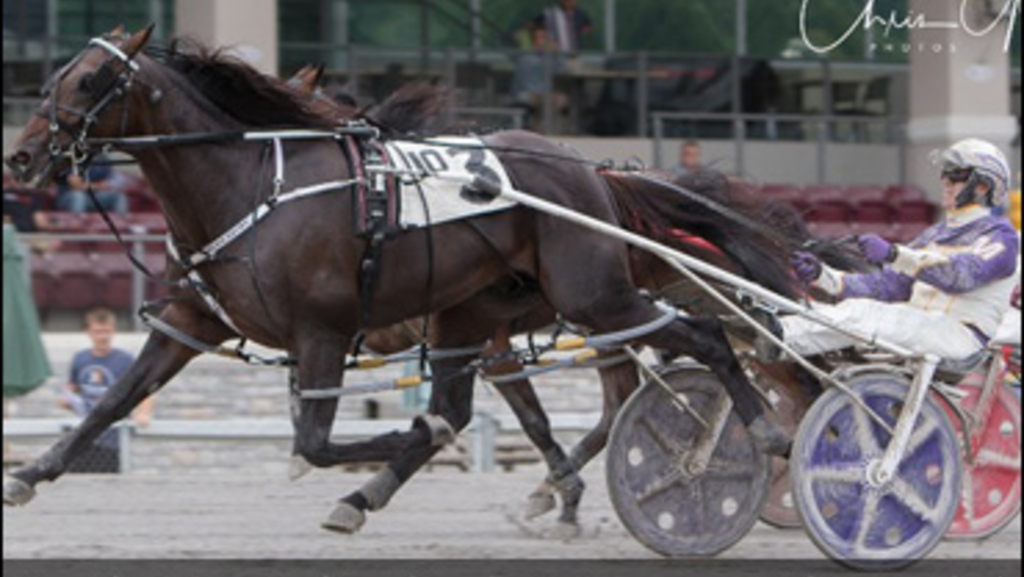 A tooth and nail battle between Huntsville and Fear The Dragon took place in Saturday afternoon’s $400,000 Delvin Miller Adios, with Fear The Dragon digging down deep to dispose of his dead game rival in 1:49.1.

Race favourite Huntsville and Eddard Hanover battled for the lead to the quarter pole in :26.1, with Huntsville eventually working his way to the top for driver Tim Tetrick. Huntsville motored to the mid-way point in :53.3 with Fear The Dragon commencing a first-over bid from the five-hole.

Huntsville hit the accelerator in the backstretch in a bid to gain some insurance lengths on Fear The Dragon. Little separated the two of them at the three-quarter pole in 1:21.1, and it was more of the same for the majority of the stretch drive. It wasn’t until the closing strides that Fear The Dragon got the upper hand on Huntsville. Fear The Dragon prevailed over Huntsville in 1:49.1, with R J P taking home third prize in the rich affair.

Brian Brown trains the three-year-old son of Dragon Again-Armbro Cinnamon for Emerald Highlands Farm of Mt. Vernon, OH. The 14-time winner now boasts a 9-1-0 record from 10 starts this season. The $200,000 payday lifted his lifetime earnings to $1,294,594.

A stakes-filled undercard featured a number of other top performers, and here's what took place in those events:

Whatstroublnurocky was a popular winner in his $28,475 division for the tandem of driver David Miller and trainer Brian Brown. Sent off as the 4-5 choice, the son of A Rocknroll Dance-Whatstroublnubunky got away fourth and held that position through first-half fractions of :28.2 and :57.2. Miller had his charge gunning first-over in the third quarter, and a :27.2 closing panel propelled him to the three-length win over Antagonist in 1:53.2. Third prize went to Someboysomewhere.

It was the first win in three attempts for the Emerald Highland Farms’ homebred. The lion’s share of the purse bumped his bankroll to $14,238.

Disorder went to the front and didn’t look back in his $28,875 division for the team of driver Yannick Gingras and trainer Ron Burke. Gingras carved out fractions of :27.3, :56.2 and 1:24.3 before summoning up :28.3 closing speed from his charge. That earned him the 1:53.1 score by three-quarters of a length over Aleppo Hanover and Beach Watch.

The son of Somebeachsomewhere-Naughtytiltheend won for the first time in four tries for the partnership of Burke Racing Stable LLC, Purnell And Libby Silva, Weaver Bruscemi LLC and Diamond Creek Racing. The rookie lifted his lifetime earnings to $15,938 with the win.

Reign On Me was a popular winner in her $23,615 assignment for the team of driver David Miller and trainer Richard ‘Nifty’ Norman. The daughter of Well Said-Indulge Me sat fourth through first-half fractions of :28 and :56.2. Miller came first-over in the backstretch and was still more than three lengths away from leader Yankee Will Dance at the three-quarter marker in 1:24.2. Reign On Me went into sprint-mode late and her :28.2 closing speed earned her the facile win by 3-1/2 lengths over Belles Delight in 1:53.2. Yankee Will Dance faded to finish third.

Sent off as the 6-5 choice, Reign On Me improved her rookie record to 1-1-1 from three trips to the track for Jennifer Dalton Stb LLC of Alpine, NJ. The $22,000 purchase from last year’s Harrisburg Yearling Sale has banked $15,508 to date.

Cult Icon pulled off an 18-1 stunner in her $24,015 test for driver Tyler Smith. He got away in mid-pack with the daughter of Bettors Delight-Yankee Icon while Xfinity Beach shot to the top and doled out fractions of :28 and :56.3. Aims Whisper was the new leader at the three-quarter pole in 1:25.3, but Cult Icon was on the tracking cover and only two lengths off the lead. Cult Icon roared home in :28.2 to win by a length over Aims Whisper in 1:54.2. Xfinity Beach took home third money.

Broadway Concert was a front-stepping winner in her $28,487 assignment for driver Corey Callahan and trainer John Butenschoen. Callahan left hard from Post 7 with the filly, and after parking past the quarter pole in :28.1 she motored to the lead and proceeded to toss out middle splits of :56.1 and 1:25.2. Her :29.4 kicker was enough to earn her the half-length decision over Mimosa Hanover in 1:55.1. Gins Tonic was a lapped-on third.

The 5-2 second choice in the wagering improved her 2017 record to 3-1-1 from nine starts with the victory. The daughter of Broadway Hall-Luscious Lindy is now a four-time winner for Bay Pond Racing Stable of Paoli, PA. She’s stashed away more than $45,000 to date.

Crann Tara was bet off the board in her $28,878, and she didn’t let down the army of backers that sent her off as the 1-5 choice. Tim Tetrick got away fourth with the heavily-favoured lass, who came first over on the way to the half. With fractions of :28.1 and :57.4 to chase, she accelerated to the lead in the backstretch and rolled the group by the three-quarter pole in 1:27 before storming home in :29.2 to win by a pair of lengths over Itsgoodtobequeen in 1:56.2. Dangle Then Deke grabbed the show dough.

Linda Toscano trains the daughter of Donato Hanover-Shan Riches for W J Donovan of Delray Beach, FL. It was her third win of the season – and the seventh to date – for the career winner of $113,452.

Snowstorm Hanover pulled off a 6-1 upset when he held on for a neck decision in 1:55 for driver Matt Kakaley. The son of Muscle Massive-Snow Angel Hanover got away third and held that position through first-half fractions of :28.2 and :57. Kakaley came first-over in the backstretch, and Snowstorm Hanover was just a length away from Moonshiner Hanover at the three-quarter pole in 1:25.4. Snowstorm Hanover’s :29-second closing quarter helped him prevail by a neck over Andy M, with Frankie Mullins a lapped-on third.

Ella Christina erupted for a ginormous upset in her $62,475 assignment for driver Jim Pantaleano and trainer Nick Surick. Away next-to-last in the eight-filly affair, Ella Christina lingered near the back of the pack for much of mile before flying home in :27 to win by a half-length margin over Colorful Jasmine in 1:52.2. Even-money favourite Rosemary Rose, who carved out fractions of :28, :56.3 and 1:24.3, was a lapped-on third.

The daughter of Western Ideal-Arthroscopic won for the third time this season and for the fifth time in her career. Surick owns the career winner of $97,565 with JL Benson Stables Inc, William O’Daggett, Jr. and Lawrence Vukovic.

Blazin Britches made a big move in the backstretch and drew off to an impressive score in her $63,475 test with driver Tim Tetrick at the controls. He got away third with the Brian Brown pupil while Bettors Up carried the mail through first-half stations of :26.4 and :55.1. Tetrick launched his charge to the outside in the backstretch, and his filly made a powerful sweep to the front. He led the group past the three-quarter pole in 1:22.3 before using a :27.3 kicker to win by a pair of lengths over race favourite Bettors Up in 1:50.1. Third prize was earned by Brazuca.

It was the seventh win of the year from eight tries for the daughter of Rock N Roll Heaven-Soggy Britches. Emerald Highland Farms of Mt. Vernon, OH bred and owns the career winner of $66,988.