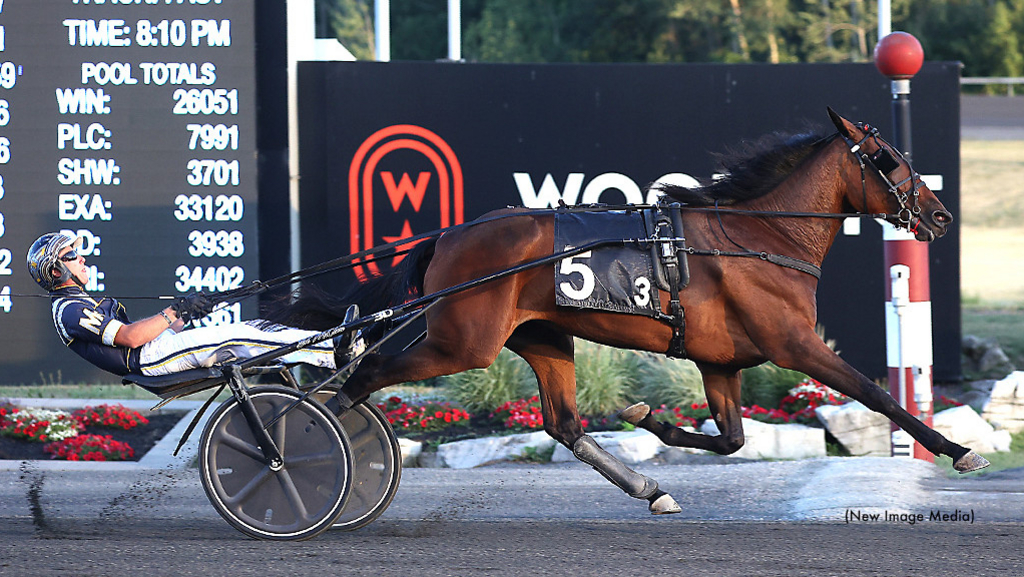 The card at Mohawk kicked off with the second leg of the Millard Farms Series for two-year-old colts and gelding trotters. Warrawee Yang, with Bob McClure in tow, made his move in the final turn to win by three-quarters of a length in 1:57.4 for trainer Mark Etsell. The Trixton-Endless Flirt colt has a third and victory in two starts with earnings tallying $11,920 after tonight’s win. He is owned by Etsell, Robert Newton, Peter Porter and Denise Turner.

The second $20,000 division of the Millard Farms Series was won wire-to-wire by Lukes Bar and Todd McCarthy for David Menary in 1:55.4. The Bar Hopping-Lukes Sophie gelding is owned by Menary Racing Inc. and Anthony Timmins.

Trained by Scott McEneny, I Got The Tab finished in second with Sylvain Filion and Jokic, trained by Dustin Jones, followed in third with Tyler Jones.

The first leg of the Dream Maker for young male pacers went to the gate in the second race. Stormalong, trained by Tony Alagna, cruised to victory in 1:52.4 for owners Bradley Grant and Steve Heimbecker. Douglas McNair drove the Stay Hungry-Cut A Deal colt.

The triactor was rounded out with Nazare (Jody Jamieson) in second for trainer David Menary and Redwood Hanover (Chris Christoforou) in third for trainer Anthony Beaton.

The next division of the Dream Maker was highlighted by two Stay Hungry colts, both trained by Tony Alagna, claiming first and second. Hungry Angel Boy went to the gate as the favoured bettors' choice and, after a :27.4 first quarter, lead the field to the wire in 1:52.4. He was driven by Todd McCarthy and is owned by Alagna Racing LLC, Pryde Stables Inc., and Pit Bull Stable LLC. In two starts, Hungry Angel Boy has had two wins and $20,000 in earnings.

Stablemate, Hungry Man, was bested by a half-a-length. Bob McClure was in the seat for owner Bradley Grant. Brue Hanover and Douglas McNair finished third for trainer Scott McEneny.

Two-year-old trotting fillies were featured in the second leg of the Pure Ivory Series and Silly Me Hanover (Bob McClure) overcame a challenge of an 11-horse field to win in 1:56.4. Luc Blais trains the Walner-Shared Past filly for Determination out of Montreal, Que. After a win in the Pure Ivory Series on July 21, the filly (pictured above) is now two-for-two.

Trainer Shawn Steacy recorded three wins on the card with Ace Of Aces (Scott Young) in 1:53.3, Girlwithoutlimits (Louis-Philippe Roy) in 1:59.1, and Ahi Sunshine (Sylvain Filion) in 1:54.2.