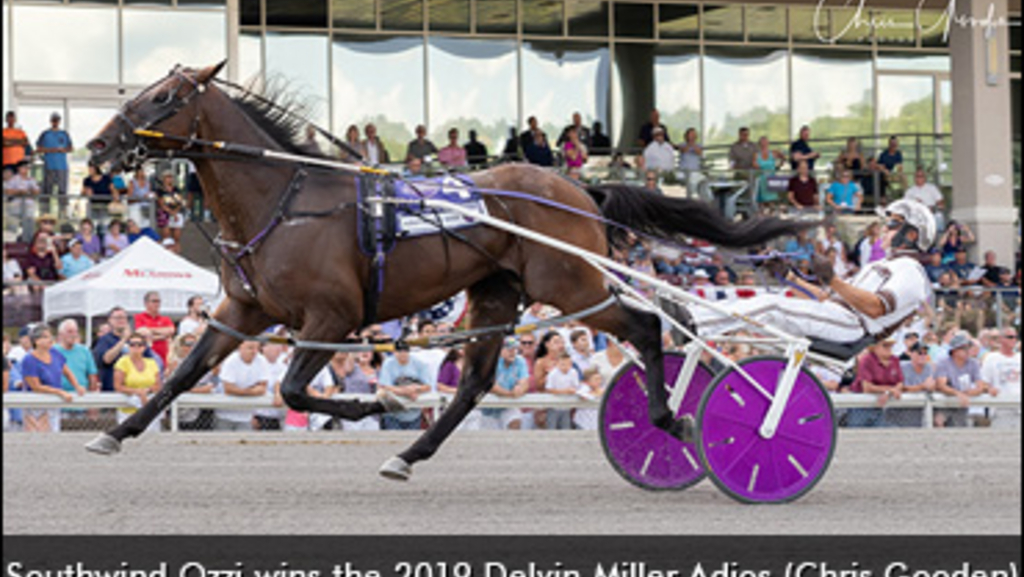 If the Adios elimination performance of Southwind Ozzi didn't place him in the discussion of harness racing's top sophomore pacers, his effort in the 2019 $400,000 Delvin Miller Adios Final certainly will.

Driver Brian Sears settled the 4-5 choice away into fourth as three horses barreled off the starting gate. Elimination winner Captain Victorious (Yannick Gingras) outsprinted fellow elim winner Prince Of Tides (Dave Palone) and Escapetothebeach (Tim Tetrick) and hit the opening quarter in a sizzling :25.3. Palone quickly looped to the lead once Captain Victorious settled in front of the grandstand and fronted the field to the opening half in :53.3.

Sears was on the move with Southwind Ozzi just before the half, creeping off the wood to advance first-over with Stag Party (Dexter Dunn) on his helmet. Confidently, Sears and Southwind Ozzi continued to stalk the pacesetter and powered past Prince Of Tides through a hot :26.2 third quarter to clear to the lead after hitting the three quarter marker in 1:20. The margin of victory only increased from there despite a lack of competition as Southwind Ozzi coasted home in :28 to hit the wire in a lifetime best 1:48, just one-fifth of a second off the track record. Prince Of Tides held off Stag Party for place.

"I liked the way things were setting up and I was really confident in my horse," said Sears after the win. "He's raced first up a couple of other times and he doesn't mind it. He was ready to go and I was trying to rate him a little bit, but he was ready to go when I did pull him."

When asked if he could have gone a bit more and taken a shot at the track record, Sears agreed but said "I'm not one for track records. I just like to win."

It was the third Adios title for Sears, who triumphed previously with Pine Valley (2001) and Delmarvalous (2010).

Trained by Bill MacKenzie, Southwind Ozzi (Somebeachsomewhere - Southwind Solara) is owned by New Jersey's Vincent Ali, Jr. and Alma Iafelice. The bay ridgling has yet to miss the top two in six seasonal starts, with five wins and a second thus far in 2019. The only horse to beat him this season: Captain Crunch. He was scheduled to race against some of the division's top colts in the Hempt until being sidelined with a hernia that required surgery and time off. Southwind Ozzi came through his surgery well, though surgeons had to remove a testicle during the procedure. Thus, Southwind Ozzi goes into history as the first ridgling to win the Pace for the Orchids. 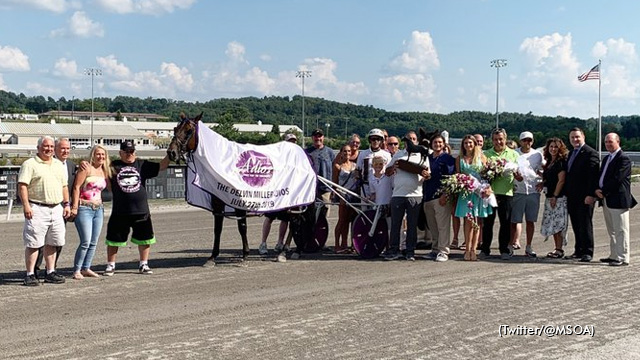 "To come back this sharp is a credit to Bill and he's done a great job," continued Sears, "and he's a great horse, a pleasure to drive and he makes my job easy."

"After that," he said, "we'll consider the options."

Warrawee Ubeaut won her divisional Dan Patch Award last year, but in the Adioo Volo, she was stuck with post 9. She rocketed to the top, but Tall Drink Hanover leaving from post 6 for Andrew McCarthy slid into the pocket behind her. McCarthy guided Tall Drink Hanover outside in the lane, and the daughter of Captaintreacherous-Take Into Accounted edged Warrawee Ubeaut by a nose in 1:50.2. Rockn Philly was a ground-saving third.

“She’s been terrific for what we paid for her — $35,000,” said winning trainer Tony Alagna. “She’s been a real sweetheart. She goes next to the Shady Daisy on Hambletonian Day, and she’s eligible to everything late.”

Stonebridge Soul entered the Adioo Volo off wins in a pair of prestigious stakes — the Lynch and the Mistletoe Shalee — and she kept the ball rolling with a front-end score in 1:51.1 for Tim Tetrick, trainer Chris Ryder and owners Henderson Farms and Robert Mondillo. Sweet Heaven finished second, with Odds On St Lucie third.

“She’s definitely on her game right now, and she’s feeling her oats,” Tetrick said. “She can leave hard and still go the half in a minute. As soon as you talk to her, she picks it back up and races whoever comes at her.”

Also featured on the Adios Day card was a $50,000 Invitational Pace event named for Foiled Again, who retired as the richest pacer all-time with more than $7.6 million in earnings. The gallant old gent took a star turn by leading the post parade.

Tetrick and trainer Ron Burke collaborated on a win by the Shadow Play-Backstreet Sweetie four-year-old gelding Backstreet Shadow, who altered a line in The Meadows’ record books by lowering that division standard to 1:48.4. The pocket-sitting Scott Rocks was second, while Alluneedisfaith N completed the ticket.

A simple quarter-move from third was the path to success for Backstreet Shadow, who came home in :53.4 after winning in 1:47.4 last week at the Meadowlands. He raised his lifetime earnings to $334,646 for Burke Racing Stable LLC, Weaver Bruscemi LLC, Lawrence Karr, and J&T Silva- Purnel & Libby.

That group acquired Backstreet Shadow privately shortly after he was clocked in 1:46.2 while finishing third in the $250,000 Graduate final.

“When he became available, we were very surprised because young horses like that with that kind of upside don’t usually become available,” Burke said. “He’s a big horse, and he probably has another bump coming. He’s a big, long-striding horse, and he may find another gear.”

Goes Down Smooth prevailed from post 8 with a two-move victory . . . and may have punched his ticket to the Hambletonian. Said winning driver Matt Kakaley:

“I think they want to give him a shot there, although I don’t know for sure, but he’ll be okay there,” Kakaley said. “He’ll hold his own. He’ll definitely step up on a bigger track.”

The Muscle Hill-Peach Martini gelding got away third, quarter-poled to the front and downed Mass Fortune K by two lengths in 1:54. The pocket-sitting Kates Massive earned show.

Nomo Volo eschewed a potential early seat and needed the opening three-eighths to reach the point. Nevertheless, she prevailed in 1:55.2 for trainer/driver Jeff Gregory, defeating Windy Corner by 2-3/4 lengths. Ladylilli was third.

“ I think the opening was big enough (to duck),” Gregory said. “But I wanted to ease her around the first turn and try and get to the front eventually. Last time I raced her here I left maybe a little too hard with her, and she made a break in the first turn. So I didn’t want to take a chance and do that again. She’s eligible to both Pennsylvania and Kentucky sires stakes, so we might try to race her in each.”

The other division went to Magical Beliefs, who quarter-poled to the front for David Miller and triumphed in 1:55.2. Early leader Keystone Abbey was second, a length back, with Southwind Storm third.

The Sweet Lou–One Ace Too Many filly Sweet Ace made her debut on the national scene an explosive one, taking her division in 1:50.4 – the fastest mile of the year by any two-year-old, anywhere, on any size track, and a track record for her class at The Meadows.

Dexter Dunn tucked the filly in fourth early, as Shouldabeenatd and Dance Club took the top two spots in a :27 opener. Silver Tail got restless in the three-hole and came out off the first turn to go to the lead, stringing the field out in hot middle fractions of :54.3 and 1:22.3, with the rest of the field well behind the top quartet.

Shouldabeenatd wheeled outside and went right past the pacesetter on the far turn, with the two directly behind her following that move, Sweet Ace swinging three-wide at head stretch. To the wire it was a battle between Shouldabeenatd and Sweet Ace, with the winner drawing clear late to win by 1-¾ lengths, with Dance Club third.

“”The trip worked out good,” Dunn said. “We had a live helmet to follow right into the straight. She has push-button speed, and she showed the speed she’s got.”

The other section of the Mary Lib Miller saw the Artspeak-Apippin Hanover miss Aplomp Hanover lower her mark to 1:53.4, making a quarter-move for driver David Miller and going on to a 1-½ length victory over Keystone Eureka, with Sizzling third. Trainer Kevin Lare and owner Frank Chick, who are having a terrific year with their freshman pacing fillies, are the connections behind the winner of three straight races.

Tim Tetrick, red-hot on the other side of Pennsylvania recently, had four wins on the Adios card, including two in the Gov. Lawrence, with the faster of his winners being the Somebeachsomewhere–Persistent colt Seeyou At Thebeach, who broke his maiden in 1:52.2.

The pattern of this race was much like that of the Sweet Ace event, with the front pack of four well separated from the rest, and Seeyou At Thebeach moving out behind cover at the three-quarters to go up after undefeated favourite Cattlewash, who got the top after a :27.4 quarter and recorded mid-splits of :56.4 and 1:24.3. Cattlewash carried his advantage almost to the wire, but Tetrick rallied the victorious Brian Brown trainee to get a head decision on the money for Country Club Acres, Joe Sbrocco, Richard Lombardo, and Chris Page.

Tetrick’s other victory in the day’s baby colt action was with the undefeated Adriano Hanover, who at 1-9 made a quarter-move to command and was never in doubt, winning by 2-¾ lengths in 1:53.1, missing his mark by a tick. The son of Western Hanover-A And Gsconfusion added a Grand Circuit triumph to his prior PASS win for trainer Jim King, Jr. and owners Jo Ann Looney-King and Joseph Palermo III.

“At times, his potential seems unlimited,” Jim King said. “So far, he’s done everything asked of him — and with a lot of determination. When he gets in with his own kind and they put up a fight, we’ll see how he does than.”

The third division of the Gov. Lawrence went to the Captaintreacherous-Charisma Hanover colt Hey Run Me Over, who brushed to the backstretch lead and went on to be three lengths clear at the finish in 1:52.4 to take a new speed badge. Andrew McCarthy had the sulky assignment for trainer Rollie Mallar, who is also co-owner with Linwood Higgins and Patrick Leavitt.

(with files from The Meadows)