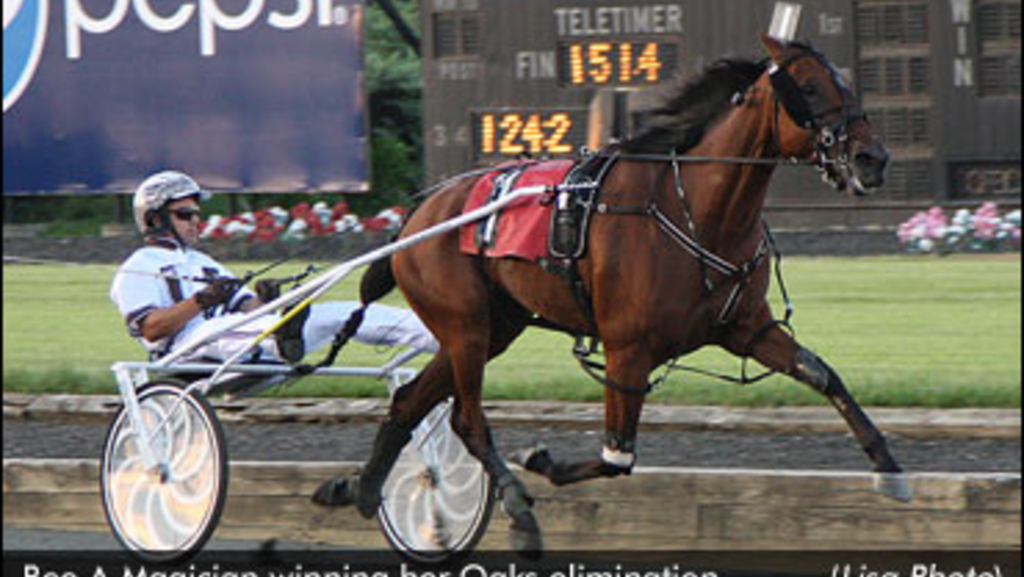 Eliminations continued for the Hambletonian Day stakes events on Saturday evening at Meadowlands Racetrack, beginning with a dominant score by Oaks contender Bee A Magician.

With the inside post advantage, heavy 1-9 favourite Bee A Magician and Brian Sears established the early lead before yielding to the parked out Frau Blucher at the :28.2 opening quarter. However, Bee A Magician moved back out for the retake down the backstretch and cruised past middle panels of :56.1 and 1:24.2 en route to the two length victory.

"She was real good," commented Sears after the race. "We weren't trying to set any records or anything -- just get around there safe and out of trouble and that's what we did."

The Ontario-sired daughter of Kadabra is trained by Richard 'Nifty' Norman and owned by Melvin Hartman of Ottawa, Ont. along with Florida's Herb Liverman and David McDuffee. She remains undefeated in eight sophomore stakes starts heading into next weekend's final. The world champion will look to add to her already impressive resume, which includes victories in the SBOA Stakes, Casual Breeze, Elegantimage, Ontario Sires Stakes and Del Miller Memorial.

Mistery Woman later rallied home off cover to prevail in 1:53 in the second Oaks elimination with Classic Martine (Ron Pierce), To Dream On (Yannick Gingras), Coffeecake Hanover (Jim Morrill Jr.) and Time To Kill (Simon Allard) finishing second through fifth to round out the field for the final.

A parked out Classic Martine worked her way to the lead past the :27.4 opening quarter and proceeded to the half in :55.4. From there, driver David Miller angled Mistery Woman off the pylons from fifth and picked up cover in the form of favourite To Dream On, who took a short lead by the 1:24.3 third quarter station. However, Mistery Woman surged by in the stretch to establish a new lifetime mark.

"I followed her [To Dream On] right up and my filly felt real good turning for home and she did the rest," said Miller.

"It looks like she's coming into herself again pretty good right now so with a little bit of luck [she could do some damage next week]," said Czernyson.

Sweet Lou kicked off the elimination round for the U.S. Pacing Championship with a 1:49.1 victory in the first $50,000 event. Favourite Bolt The Duer (Mark MacDonald), A Rocknroll Dance (Tim Tetrick), Modern Legend (David Miller) and Thinking Out Loud (John Campbell) will also advance to next week's final with top five finishes in the elimination.

Driver Yannick Gingras sent the Ron Burke trainee first over from fourth after a :26.3 opening panel and cleared to command ahead of early leaver Bolt The Duer (Mark MacDonald) en route to the :55 half-mile mark. Sweet Lou proceeded to three-quarters in 1:22.4 and rebuffed the first over challenge from A Rocknroll Dance as he drew clear in the stretch for his 21st career win.

"The first quarter was pretty fast, but the minute Mark grabbed the lead, he slammed on the breaks pretty good," explained Gingras. "Knowing his horse -- he likes the two-hole -- I figured he was waiting for somebody to come back and cover him up."

The four-year-old son of Yankee Cruiser, who is approaching the $2 million earnings milestone, is owned by the Pennsylvania-based Burke Racing Stable LLC, Weaver Bruscemi LLC and Phillip Collura, along with Lawrence Karr of New Jersey.

"It's scary this group of horses," added Gingras. "There's 15 very, very good aged horses so you've got to race them to make the final. It makes it hard. These trainers have to have these horses on their toes for every one of their starts or you're in jeopardy of not making the finals. It's going to be tough, long year."

"I was hoping for something conservative," said Jamieson of the winning trip. "It's been a couple of weeks [since his last race] and it was a long ship down here. We're going to take him home next week according to the boss. I guess it's arguable to some people down here, but definitely the Canadian air is more conducive to this big guy. He's just been an awesome animal. We've been money in the eliminations, we got to start turning that into finals."

Making her U.S. debut, One More Ginny pulled off a 25-1 upset in the Ima Lula after being parked out past the opening quarter. She rebuffed a first over challenge from Dorsay (Corey Callahan) and trotted on to a 1:53.1 career-best equalling victory, holding off the quick-closing Personal Style (David Miller) by three-quarters of a length while favourite Check Me Out (Tim Tetrick) came in third. The Ontario-sired daughter of Angus Hall was driven by Sylvain Filion for trainer Ben Baillargeon and owner Kor Stable Limited. of Guelph, Ont.

Earl Beal Jr. Memorial Trot champion Corky won his tune up for the Hambletonian, a $25,000 Open event for sophomore trotters, with a 1:54.3 gate-to-wire victory for driver David Miller and trainer Jimmy Takter. The son of Muscles Yankee held off the pocket-pulling favourite, E L Rocket (Yannick Gingras), to win by a head with Banco Solo (Ron Pierce) finishing third. Corky is owned by Takter's wife Christina and John and Jim Fielding of Toronto.

"He's a pretty durable horse and should be able to handle the heats alright," added the winning reinsman.

Corky's stablemate High Bridge swept to the lead down the backstretch en route to capturing the other Open carded on the Saturday program with Yannick Gingras aboard. The Cantab Hall colt won in a career-best equalling 1:54.3 over O'Brien Award winner Wheeling N Dealin (Sylvain Filion) and favourite Smilin Eli (Tim Tetrick). He is also owned by Christina Takter and the Fieldings, along with Ohio's Joyce McClelland.

"I was happy with this horse," commented Gingras. "I'm sure Jimmy wasn't real pleased about me having him on the front. I'm pretty sure it was the first time he's been there, but he was actually really game and he dug in to the wire."

Earlier on the card, top three-year-old pacing filly I Luv The Nitelife was collared in the stretch by Jerseylicious (Corey Callahan), but battled back to win the $20,000 Miss New Jersey Prep in a photo finish. She stopped the clock in 1:50.3 with Tim Tetrick in the sulky. The daughter of Rocknroll Hanover is campaigned by trainer Chris Ryder for Florida owners Richard Young and Joanne Young. She'll head to the Miss New Jersey final as the heavy favourite with six consecutive wins under her belt, including the Fan Hanover, Lynch Memorial and Mistletoe Shalee.