McWicked Victorious In The Adios 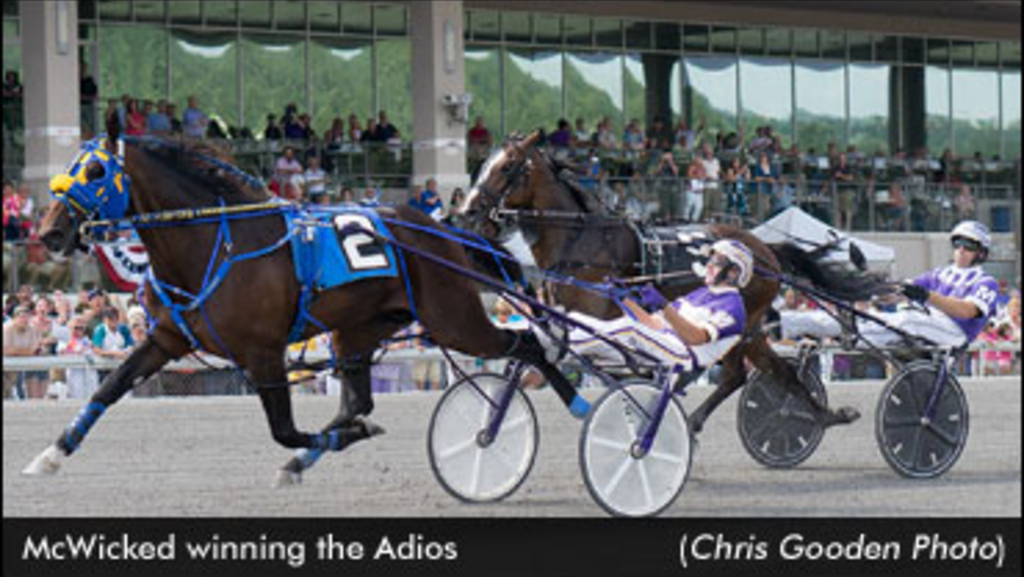 Heavy 1-5 favourite McWicked fought off fellow elimination winner Somewhere In L A to prevail in the $400,000 Delvin Miller Adios Pace for the Orchids Presented by Coors Light at The Meadows on Saturday afternoon. The undercard saw the filly companion race go faster than the boys and establish a new all-age track record.

At Press Time (Matt Kakaley) left quickly from post three to grab the early lead over insider Cammikey (Brian Zendt), but post two starter McWicked and driver David Miller swept by into the turn and hit the first quarter mark in :26.3. McWicked led the way to the half in :55.4 and three-quarters in 1:22.3 with Somewhere In L A (Brett Miller) advancing from fourth to engage in a head-to-head battle with the leader around the final turn. However, David Miller was not worried as he called upon his charge to draw clear down the stretch for the 1:49.1 victory. Somewhere In L A stayed for second and Cammikey finished third. 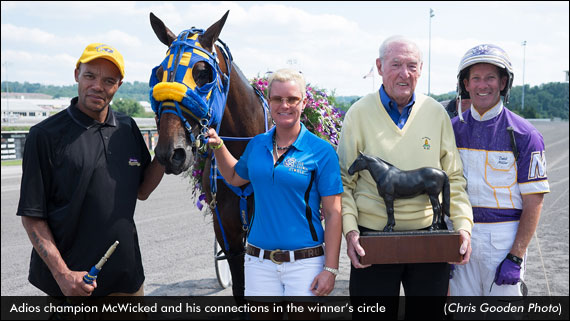 "I was really anticipating a lot more leavers and really only the one horse pushed off and I got back to the front and pretty much just loafed around the track really," said David Miller. "He never got really pressured any at all.

"Honestly, I was quite surprised that [the fractions] were that cheap. I was feeling pretty good and Brett was kind of just riding there. We never really started pacing until about halfway through the last turn and then we humped on home pretty good. My horse, he was ready for him. He's very manageable and he would go a lot slower if I would let him, but when I called on him, he kicked in and got the job done."

“For a split second, I thought I had him beat,” said Brett Miller. “My horse was a little lazy getting out of there, and when McWicked got right to the front, I knew we were in trouble. I thought the only thing I could do was come first over and rate my own mile. But McWicked’s fractions were too easy.”

McWicked paid $2.40 to win. The McArdle-Western Sahara colt boasts four straight wins having swept eliminations and the finals of the Adios and Pocono Downs' Max C. Hempt Memorial Pace (with a 1:47.3 world record mile). He now has six wins in nine starts during his sophomore season and earnings of $628,340.

"So far every start I've put this horse behind the gate -- even the starts he got beat -- he's given everything he's got, 110 per cent," said Coleman, who is the first female trainer to win the Adios in its 48-year history. "He's an iron tough horse, wicked fast, just a pleasure to have in the barn. He doesn't really do a thing wrong, he's just a sweetheart of a horse."

McWicked will race in the Pennsylvania Sire Stakes next with the Little Brown Jug on his radar later this year.

Mattamerican took the $30,000 Adios Consolation in 1:50.3 for Dave Palone, trainer Norm Parker and owner/breeder Bob Key of Leechburg, Pennsylvania. The race was opened to Pennsylvania-sired colts and geldings who did not compete in Adios eliminations.

In a conditioned pace, David Miller piloted Santa Fe Beachboy to victory in 1:49.1, a track record for four-year-old horses. That improved upon the mark of 1:49.3, which was established by Trick Man in 2011. Brian Brown trains the son of Somebeachsomewhere-Santa Fe Yankee for the Santa Fe Stable.

Allstar Rating got the jump on a crowded field, then overpowered the tiring leader down the backside to capture Saturday’s $114,174 Quinton Patterson Adioo Volo at The Meadows in 1:49, the fastest mile ever paced at The Meadows by a filly or mare.

With a field of 11, the Adioo Volo for sophomore fillies was not split into divisions as per custom, but was raced as one dash for the cash, with nine on the gate and two trailing. That placed an emphasis on early speed, and Allstar Rating showed plenty of that for Yannick Gingras, seizing the lead in a blistering :26.2 opening quarter. Then, a sequence of surprises helped determine the outcome.

Away third, Gallie Bythe Beach and David Miller launched a quarter-pole move at about the same time Southwind Silence broke stride along the cones and veered outside, impeding the progress of Gallie Bythe Beach.

“That really loused us up,” Miller said. “It was disturbing.”

Gallie Bythe Beach kept her feet and persevered, eventually making the front. But she had to expend so much energy in the :53.2 opening half that Gingras and Allstar Rating vacated the pocket early and pounced on the unlucky leader.

“I thought I had one of the best horses in there, and definitely I was going forward,” Gingras said. “I didn’t want to get caught three-wide, so I wanted to go hard and see what happened. I could tell [Gallie Bythe Beach] was struggling a little bit through the turns, and my filly felt strong, so it was time to make the move.”

Allstar Rating defeated Also Encouraging, who overcame the first trailing position, by five lengths, with Marathon Day third. The time knocked a tick from the track record for all fillies and mares — and three-year-olds specifically — established by Big McDeal in 2012. It also lowered Magic Look’s stake record of 1:49.3.

Adios Week at The Meadows came to an exciting conclusion Saturday with the $400,000 final of the Delvin Miller Adios Pace for the Orchids Presented By Coors Light, the $114,175 Quinton Patterson Adioo Volo and four Arden Downs stakes, each a Grand Circuit event. Here are highlights of those Arden Downs stakes:

Yankee Bounty stayed undefeated in his four-race career with a victory in 1:51.3, a stake record. Although parked from post eight for about one-half mile, Yankee Bounty thoroughly dominated his split, drawing off to win by seven and a quarter lengths. Cooperstown and Lone Survivor completed the ticket. Kevin Lare trains the Yankee Cruiser-Bootleg Yankee gelding for Frank Chick.

Too Darn Hot, who had been toughened in New Jersey Sires Stakes competition, trailed the loose leader, UF Larry Alltheway, by four and a half lengths at the three-quarters before his greater experience kicked in. He tracked the leader down and edged him by a neck at the wire in 1:53.3 for Yannick Gingras, with Hall Of Terror third.

“I figured the leader would come back to me at some point,” Gingras said. “At that point, my hands were tied. If I chased him into a big quarter, that wouldn’t do my colt any good. I trained him once — he’s a big colt and I thought he would be a top colt. It’s taken him a little longer.”

Rich Wisdom moved from sixth for cover and drew off to break his maiden in 1:53.1 for Matt Kakaley and give Burke a Gov. Lawrence double. My Hero Ron was second, three lengths back, while Denslow Hanover earned show.

“He’s gotten better every start,” Burke said of his $25,000 yearling purchase. “I think he’s a good colt, not a great colt, so probably this is where he fits. He has a lot of stakes this year. He might be the kind who does good at Lexington; he seems to be long winded.”

“She was really locked on the left line today and I was having a hard time keeping her along the pylons,” Miller said of the daughter of Cantab Hall-On The Glide. “The last half of the mile when we really started going fast, she straightened out. This filly is game. She kept fighting and didn’t give up.”

Broadway Socks had little trouble wiring her field for her ninth victory in 17 lifetime starts, although winning driver Dan Rawlings indicated she might not have been at her best.

“I didn’t like the way she scored down, and I was actually planning on being a little bit conservative with her,” Rawlings said. “But nobody came, and she’s just a gutsy filly. I didn’t have to work her that hard anywhere in the mile.”

She scored in 1:56.2, one and a half lengths ahead of the pocket-sitting Global Magic. Travelin Dream earned show. David Wade trains the daughter of Broadway Hall-I Gotta Feelin and owns with Gerald Brittingham and William F. Peel III.

Skates N Plates, clearing to the lead by the quarter despite the outside eight-hole, was allowed to skate to the half in :58.3 during his division of the $65,310 Arden Downs three-year-old colt and gelding trot, then scooted home in :57.1 to hold off Lightning Lane shooter Frost Free Hanover at the end of his 1:55.4 mile. Dave Palone handled the Revenue S colt for trainer Trond Smedshammer and owner/breeder Bob Key.

Wheelsandthelegman, driven by Dick Stillings, set the pace, then rebuffed the last-quarter challenge of 1-5 favourite Il Sogno Dream to equal the 1:54.1 stake record of SJs Caviar in the other division. The Donato Hanover gelding was unraced at two, but he’s making up for lost time in 2014, as he is now six-for-seven for trainer Walter Carroll and owner Beth Carroll.

Angel Or Terror is now two-for-three lifetime, and three-for-three in good performances, after winning the first of two divisions of the $75,000 Arden Downs two-year-old filly pace. Driver Jason Brewer never looked back with the Jim Dailey-trained daughter of Western Terror, getting a cheap half and then sprinting home in :56.4 (:28 final quarter) to complete the 1:55.2 win. Angel Or Terror adds this triumph to the 1:55.4 maiden victory and the hard-luck third after going first-over on her brief resume for the ownership combine of Kimberly Dailey, John Carlo and Down The Lane Stables.

“She hadn’t been on the front before,” Jim Dailey said of his $5,200 yearling acquisition. “If she didn’t get lost, I felt pretty confident. I only plan to race her six or seven times. She’s growing pretty good and she’ll make a nice three-year-old if I don’t beat her up.”

Hot Chica Boomba rewarded Daddy Dewdrop fans with a closing victory in 1:54.4 in the other freshman filly pace cut. The daughter of The Panderosa broke her maiden by following favoured Melanies Sharkette, going past her in mid-stretch, then holding off Half Past Seven for driver Aaron Merriman, trainer Jim Arledge Jr. and owner Winchester Baye Acres Inc.