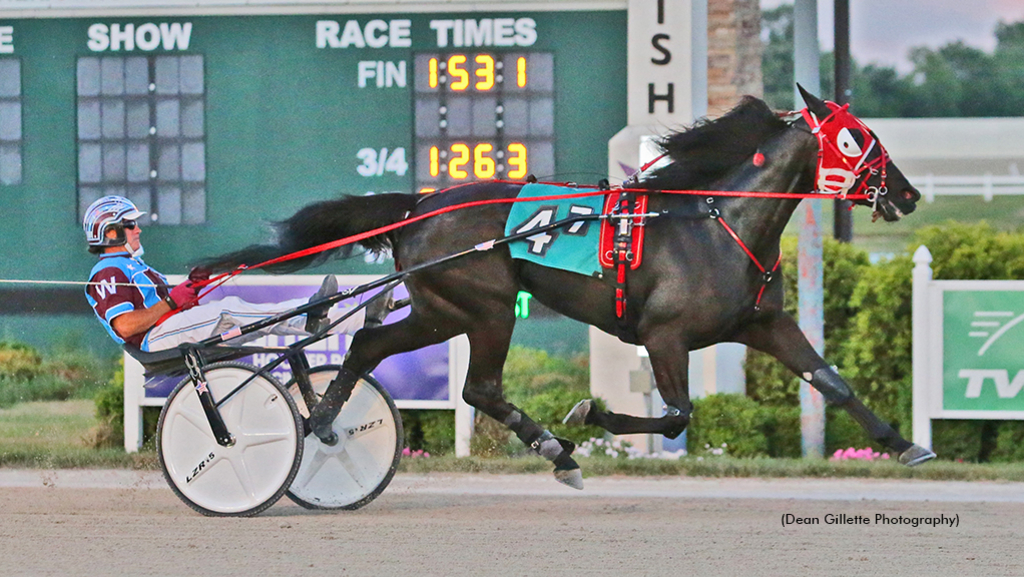 M Ms Dream turned in another dominant performance in the first of two $47,000 Indiana Sires Stakes divisions for three-year-old trotting fillies at Harrah’s Hoosier Park on Wednesday, July 20 to go a perfect four-for four this season. Jusmakinyalook and Jordan Ross turned in an impressive performance of their own to capture the second division by a length in 1:53.4.

Leaving from post four, M Ms Dream went straight to the front and went uncontested through splits of :27.3, :57.2 and 1:26.3. Stopping the timer in 1:53.1, M Ms Dream finished nearly three lengths in front of the pocket-sitting Luv Lorelei and Robert Taylor while Bluebird Dove, with Peter Wrenn, trotted evenly for third.

As the heavy betting favourite, M Ms Dream returned $2.60 to her backers at the betting windows.

The daughter of Swan For All-Trading Places has now earned $116,500 in four seasonal starts. M Ms Dream has won 10 of 12 lifetime starts and is owned in partnership by Eleven Star Stable, Hillside Stables and Frank Baldachino. She was bred by Mervin Miller.

In the second division, Jusmakinyalook converted a pocket trip into a 1:53.4 score with Ross in the bike. Using a :27 final panel, Jusmakinyalook was able to track down the post time favourite Call Me Dani and Trace Tetrick to get the win by a length.

Trained by Robert Taylor and owned by Devon Miller, the daughter of Pinetucky-Beldame Hanover recorded her third win of the season from nine starts. Jusmakinyalook has now amassed $158,905 in lifetime purse earnings. She was bred by John R. Stoll.

The victory was one of three on the evening’s program for Ross.