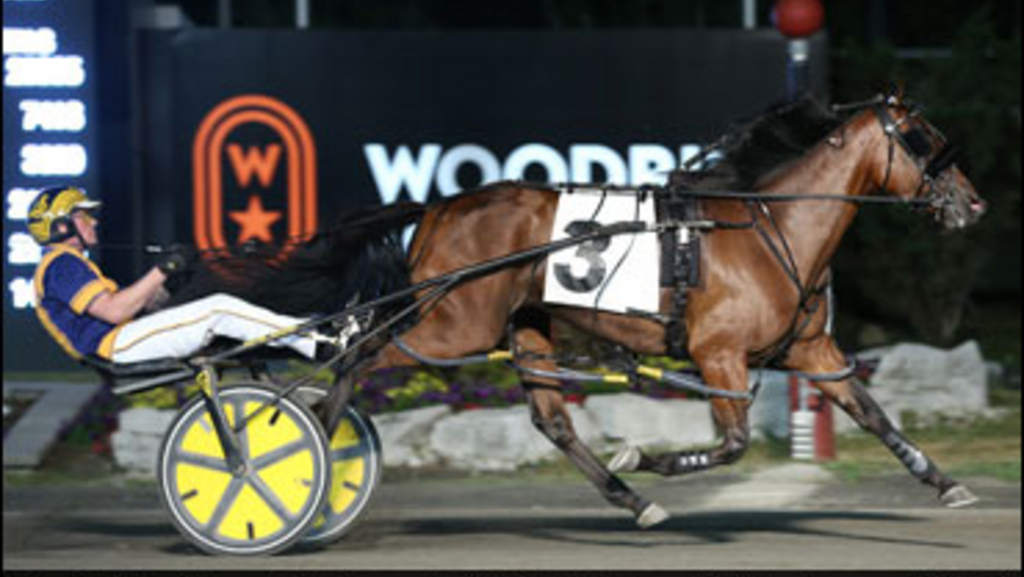 The mile took two-fifths of a second off the 1:50.1 record clocked by former Ontario Sires Stakes star Michelles Power over the Campbellville oval in 2007 and was just the latest in a series of outsized accomplishments by the diminutive Kendall Seelster, who hit the wire three and one-half lengths ahead of favourite Shower Play and Sudden Passing.

“She’s still a medium-sized, compact filly. She was probably one of the smallest ones in that race,” said trainer Paul Reid, who conditions Kendall Seelster for 1187422 Ontario Inc. of Ottawa, Ont. “She’s the exception to the rule.”

The victory, which saw the pocket-sitting Kendall Seelster and driver Randy Waples sprint up the inside when pacesetter Sudden Passing drifted to the right in the stretch, was the filly’s first in Gold Series action this season. In the May 20 season opener at The Raceway at Western Fair District, she finished third and in the June 23 leg at Woodbine Mohawk Park, she faded to sixth after doing all the work on the front end.

Following the June 23 result, Reid sent the daughter of Shadow Play and Kiddie Cocktail out in two overnight races at Woodbine Mohawk Park, on July 6 and 14. Using near-identical come-from-behind tactics in both races, Milton, Ont. resident Waples guided the filly to two victories, the first in 1:51.4 and the second in 1:51.2.

“She definitely needed to get bravened up, and she needed the work honestly. She just was lacking some speed work when I got her -- some speed miles -- so we just basically had to race her into shape,” explained Reid, who returned to Ontario from Florida in early May. “She just wasn’t into what I wanted race shape, and the extra miles, you’d like to have them in May, but it ended up we had to do them in the last couple weeks. Now hopefully we can carry on from here.”

Now that she has regained the form that saw her win two Gold Series divisions, a Champlain Stakes division and $453,985 at age two, Reid expects Kendall Seelster will see action in a few more overnight events at Woodbine Mohawk Park before the fourth Gold leg at Georgian Downs on August 19.

For his part, trainer Jack Darling was quite happy Write Me A Song had landed in the other Gold division on Friday.

“Both divisions are tough, but the other one I thought was tougher, obviously, they went 1:49.4,” said the Cambridge, Ont. resident. “Kendall was pretty awesome tonight.”

While Kendall Seelster sat in the pocket through fractions of :26.4, 56.1 and 1:23.2, sprinting home in 26 seconds to the 1:49.4 record, Write Me A Song took command of the first division early. Last year’s division champion Percy Bluechip led the field to a :27.4 quarter, but driver Jody Jamieson soon had Write Me A Song on the move and the filly was comfortably out front by the :57 half. Continuing to lead through the 1:24.1 three-quarters, Write Me A Song dug in down the stretch to hold off a fast-closing Play The Bell and secure the 1:51.2 victory. Kendall Seelster’s stablemate Just Her Luck completed the top three.

“I was hopeful. She won that race in Clinton [the Kin Pace on July 8] and she was very good, but she was stepping up to a lot tougher competition,” noted Darling, who also owns the Sportswriter daughter. “I was really happy with her. She’s a very honest filly.”

Darling made two more appearances in the Woodbine Mohawk Park winner’s circle Friday, the first with three-year-old pacing filly Neon Moon, who won an overnight event in preparation for her next Grassroots start, and the second with two-year-old pacing filly Powerful Chris, who delivered an impressive 1:52.1 victory in the last of three $68,000 Gold Series divisions for the novice pacing lasses.

Darling bought a share in Powerful Chris after a commanding victory in her July 10 Grassroots division caused owner/trainer John Pentland to be inundated with offers to purchase the daughter of Betterthancheddar and Cell Power.

“Obviously she was very impressive last week so he was getting some pretty good offers for her, but he wanted to keep her himself to race, which I don’t blame him,” explained Darling. “So anyway, he called me and offered me a piece of her, and I was pretty impressed with her last week, so I took a piece.

“I think he did me a favour by offering me a piece of her. She was just awesome again tonight,” admitted Darling, who has known Dorchester, Ont. resident Pentland since his earliest days in the business. “She just looks like something special so far.”

Bob McClure of Elora, Ont., who has driven Powerful Chris in all of her qualifiers and races, also acquired a share of the filly through his Syllabus Stable.

The other two-year-old pacing filly Gold divisions went to Springbridge Sassy in 1:53.4 and Crisp Mane in 1:52.3.

Woodbine Mohawk Park features another big card of Ontario Sires Stakes racing on Monday, July 23 with eight Grassroots and two Gold Series divisions for the two-year-old pacing colts. The Grassroots colts will kick things off at 7:30 p.m. in the first race and carry on through Races 2, 3, 6, 7, 9, 10 and 11, while the Gold colts square off in Races 4 and 8.