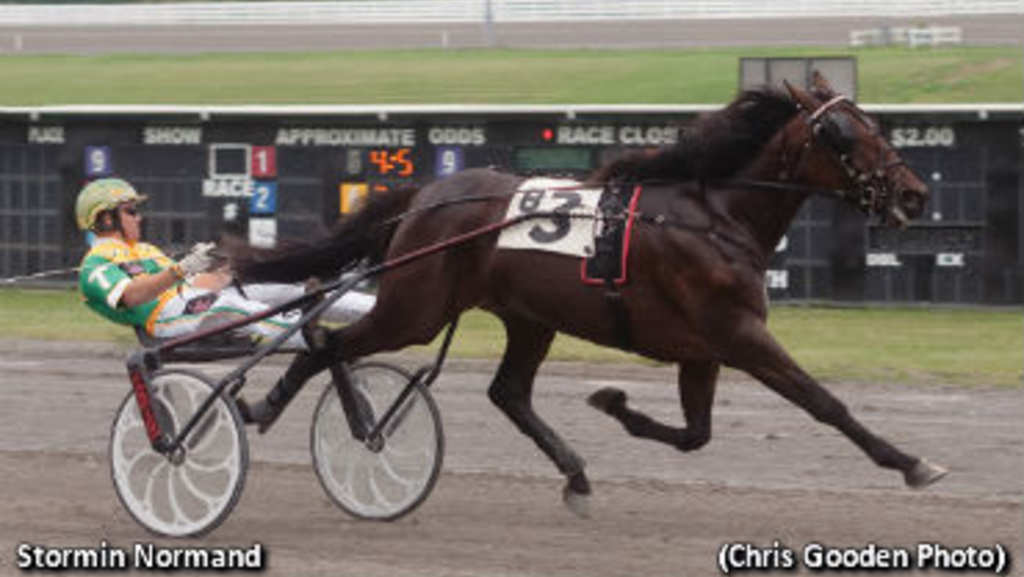 Stormin Normand stormed to the lead with a quick backside burst in a division of Tuesday’s $226,836 Pennsylvania Sires Stake at The Meadows, demolishing the field by 11 lengths in a stake-record 1:56

The event for two-year-old colt and gelding trotters, known as the Hickory Pride, was conducted over four divisions, with Lad Pine, Super Macdeen and Go Tapaigh also taking $56,709 splits.

Away third for Tim Tetrick, Stormin Normand roared past the leaders when asked for trot and knocked three ticks from the stake mark established by Lad Pine only 30 minutes earlier. On The Podium was second while Money On My Mind recovered from an early break for show.

“He’s a very handy two-year-old,” said Jim Campbell, who trains the son of Broadway Hall-Idole Normand for Fashion Farms. “He didn’t do anything flashy training down, but he didn’t do anything wrong either. He has a great attitude. Everything we’ve thrown at him, he’s passed the test.”

Lad Pine saw his record fall, but the good news was that he performed ably after a series of post parade antics that did not endear him to his trainer.

“He was dinking around in the post parade, running, jumping,” said Joe Holloway, who owns the son of Cantab Hall-Lady Pine with Bluestone Farms. “I was about to throw up because he’s been steady as anything. He raced pretty well, but I was nervous until he crossed the wire. That’s two-year-olds. They pick the odd day to play around.”

Lad Pine was the consummate professional in the race, pulling the pocket around the final turn for Dave Palone and scoring in 1:56.3. Overandovervictory was second with early leader Possess The Will grabbing show.

Super Macdeen controlled his mile en route to an easy 5-1/2 length victory in 1:59.1 over Charles Ray. Learn My Lesson completed the ticket.

“I wanted to get him on the front and let him free-flow a little bit,” said winning driver Charlie Norris. “As long as you keep his attention, he keeps going.”