On Tuesday, July 17, the Canadian Auto Workers Union announced that it has called on Ontario Premier Dalton McGuinty to put an immediate hold on the withdrawal of slot machines from Ontario's racetracks.

The CAW announcement came via release, which appears below in its entirety.

Endorsing a plea by RacingFuture.com, the CAW is calling on Premier Dalton McGuinty to put an immediate hold on the withdrawal of slot machines from Ontario's racetracks --- a move that threatens to wipe out the province's horse racing and breeding industry and throw 55,000 hard-working Ontarians into unemployment --- at least until a detailed cost-benefit analysis of the move has been ordered, carried out and made public. 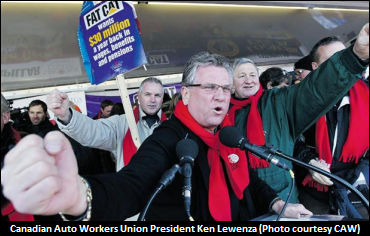 "In suddenly ending a successful 14-year partnership that has been benefiting both the industry and the Ontario economy, the McGuinty government is failing to make a distinction between the wealthy people who own racehorses and the 55,000 ordinary people who mostly live in rural areas and make between $20,000 and $80,000 a year, running small farms, breeding and boarding horses, providing veterinary, training, feed and transport services, or working at racetracks grooming and walking horses, keeping the horses healthy and fed, sweeping the floors and cleaning the horse stalls, running the pari-mutuels and maintaining the slots," said CAW President Ken Lewenza. "The government shouldn't be taking a step that will ruin these people's lives and harm the whole economy on a whim, without at least clearly demonstrating what the net social and economic impacts will be and why this is a good thing to be doing."

RacingFuture.com, online at http://racingfuture.com/, was established by long-serving former Liberal MP and corporate executive Dennis Mills and seeks to be a voice for these 55,000 voiceless primarily rural workers in bringing their plight to the attention of the Ontario public, and particularly of their urban neighbours living in the cities.

In an open letter to Premier McGuinty posted on the website, Mills called on the premier to "direct an immediate halt to all further slot machine withdrawals from racetracks at least pending a detailed review of impacts and alternatives" and to "direct the Ministries of Finance, Industry etc. and OLG to produce detailed cost/benefit analysis of the current partnership-ending initiative, including costs of job loss, general economic impact on our province, the net revenue effect for the Ontario government, and the impacts and alternatives for 55,000 current industry workers, and make the results public."

In throwing CAW's support behind this appeal, President Lewenza noted that the horse racing and breeding industry directly contributed more than $2.3-billion to Ontario's annual income in 2010, and three times that much when the indirect and induced multipliers are factored in.

In reply to Buy Canadian by GYoung

What are you doing with the

What are you doing with the slots money Mr G ? Sounds like we should hire an honest auditor? Has the Ontario auditor General ever looked at the OLG books? ONTARIO LOTTERY AND GAMING CORPORATION ? If you remember the original press conference the three stooges announced : We are going to put the slots where people want them! WHAT ABOUT PLACES LIKE RACETRACKS and RURAL ONTARIO? ( I ENJOY THE SLOTS AND support the mutuels since 1956) What's wrong with the way it was?Are you three guys sleeping very well these nights?Tom Kelly

To all readers--there is a

To all readers--there is a move underfoot by the CAW to add people who are not in any union. For example, a vet can join the CAW and then be in a union. There is going to be a VERY LARGE influx of people into the CAW. More on this will be coming out soon.

All trainers and drivers can join up--anybody without a union.

This sounds, on the surface,

This sounds, on the surface, to be awfully good news in our industry's fight with the corrupt government in Queen's Park BUT, as usual there a few big BUTs attached. It sounds great, here on SC News, to have the CAW come out swinging on behalf of the Horse racing industry but, again, it's just more preaching to the choir until this hits the MAIN STREAM MEDIA.
This "Release" was issued on July 17/2012 but as of 5.00 pm on July 18/2012 I have seen NO mention of it on any of "The Toronto Star", "The Toronto Sun", "The Globe And Mail" or "The Hamilton Spectator". Until this can be read by the ordinary Joe in Downtown Toronto it is of absolutely NO value.
Next little BUT, of course, is that by the CAW supporting our industry we will have lost the tiny bit of support we had from Tim Hudak and the PCs because of his all out war against labour unions and his desire to turn Ontario into a Wisconsin like "Right to Work" state.
I think it's time OHRIA took off the gloves and started punching like this is the real WAR we know we are in! Lawsuits, applications for Injunctions and getting Charges laid against Corrupt Politicians (you know who!) and Bureaucrats (Paul Godfrey) and their buddies (Larry Tannenbaum) are the only things that are going to work now.

This is great news! There is

This is great news! There is strength in numbers and the more support the horse industry has the better. Thank you Mr. Lewenza for stepping up to the plate and thanks Dennis Mills for the most informative website.

Thank you Ken Lewenza for

Thank you Ken Lewenza for joining the many individual voices in an effort to save harness horse racing-slots in Ontario. Windsor Raceway has a skeleton staff doing whatever to maintain. It is very hard to go to work and see the abysmal ignorance of everyone who has participated at this racetrack to bring about an end that is so apparent as soon as you enter the clubhouse.

I made a comment about one year ago that horse racing needed the support of an organization like the CAW. I was roundly critisized by some for such a rash thought. But now we see having Lewensky or The former Buz Hargrove in our corner is maybe the only option. Can you Imagine being given one of the (CHEAP In substance and in some cases truth) assessments and consequent fines or suspensions by the ORC and having Buz Hargrove represent you at an ORC hearing. Doubt the outcome would be similar to what we are often seeing today.
The only way Horse Racing can succeed today with the dependency on Slot Revenues and the required partnership with any Political Entity is to have ONE STRONG ASSOCIATION and affiliate yourselves with a stronger association. You will never stop the bickering amongst yourselves,because competition brings out the worst in some.But DIVIDED you will never succeed.

If anyone can get our message

If anyone can get our message across and can get through to these pig-headed politicians, its Kenny. Thanks to the CAW for this show of support.

Thank you Future Racing.com and the CAW and everyone
who has stepped up at this critical time to stop this madness.

Thank God For CAW, The People

Thank God For CAW, The People of Ontario know, for sure who you are! I am also a horse owner that does it because I love the sport and the industry. Had 3 horses claimed Since The Cancellation, and have not replaced any. Maybe I can get back in to the industry I love. Still have sport horses! Our economy does not sustain that passion either. Looking forward to buying more standardbreds in the future. one can only hope!

I have owned racehorses and

I have owned racehorses and I'm anything but wealthy.

Its about time!!! This is

Its about time!!! This is what we need. I said horseman should contact CAW and ask for help. You need a voice that government respects. Seems obvious to me they don't respect the horseman.
KH

Hopefully this will get the

Hopefully this will get the media and public attention we haven't been able to get ourselves.

Thank you Mr. Lewenza for

Thank you Mr. Lewenza for sticking up for thousand of horse people. If "WE" get through this mess, maybe there would be a way we could become part of the CAW, which would finally give us unity and true representation.