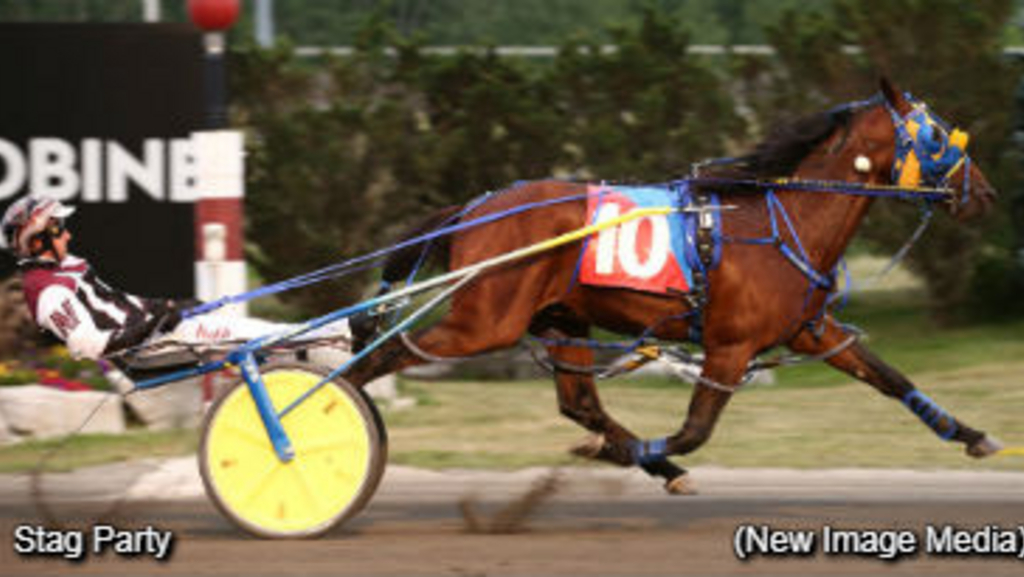 The freshman class of 2018 in the pacing colt and gelding division was front and centre at Woodbine Mohawk Park for Thursday evening’s first OSS Gold event of the season.

Stag Party overcame a Post 10 starting spot to win his $68,000 division for the tandem of driver Doug McNair and trainer Casie Coleman.

The son of Bettors Delight-My Lady Day shot off the gate to post the opening quarter in :27, but he eventually relinquished the top spot to Sunshines Finest. That foe cleared and cut out middle splits of :56.1 and 1:25.1 before Stag Party put him to the test in the lane. Stag Party rocketed home in :26.4 to win by 2-1/2 lengths over Sunshines Finest in 1:52.1. Race favourite Bettors Wish was third.

“From Day 1 he’s always shown me he has that extra gear and winning attitude in him,” said trainer Casie Coleman. “I think I got some nice colts, but he’s always stood out from the rest.”

John Fielding, Mac Nichol, Jim Fielding and Kevin McKinlay share ownership on the undefeated youngster who is 2-for-2 to kick off his career. He was a $125,000 purchase from last year’s Harrisburg Yearling Sale.

“I decided to downsize a lot, and a lot of my owners all wanted this horse and it ended up that I couldn’t own any of him, and I own a piece of everything,” Coleman told Woodbine Mohawk Park’s Jason Portuondo in the winner’s circle. “I had to beg and plead to be able to get a piece of this horse from them after I picked him out, and one of them let me in a little piece of him, but that’s how much I like him is like, I can’t train this horse and not own him.”

Bronx Seelster was a powerful winner in his $68,000 division for driver Trevor Henry and trainer Wayne McGean.

The landscape of the race changed early when the heavy favourite, Play Times Over, made a costly break. Maintenance Man shot to the lead from Post 1 and supplied the field with fractions of :26.3, :55.4 and 1:24.2, but he couldn’t go the distance. Bronx Seelster, who sat third through the opening half, pressed the leader to the three-quarter pole and then sailed home in :27.4 to win by 5-1/2 lengths over Sporty Mcsportster in 1:52.2. Maintenance Man faded to finish third.

Capers 3 Stable of Sydney, NS owns the son of Big Jim-Tarport Baccarat, who was a $22,000 purchase from last year’s London Selected Yearling Sale.

Caviart Rockland came first-over and cruised to an easy win in the final division for driver Marcus Johansson and trainer Nancy Johansson.

The rookie, who prepped for his debut with a trio of qualifiers at The Meadowlands, got away in mid-pack while Cant Be Better roared to the top from Post 9 and kicked out an opening quarter clocked in :27.3. Sports Charm sprinted past that foe in the backstretch and once he cleared he sliced out middle splits of :56.3 and 1:24.2. Race favourite Caviart Rockland came first-over on the way to the half, and he was just a length away from the leader heading into the final quarter. Caviart Rockland used a :27.2 closing quarter to win by 4-3/4 lengths over The Regulator in 1:52. Better Earl grabbed the show dough.

Caviart Farms of Vienna, VA, bred and own the son of Sportswriter-Rock A My Baby.