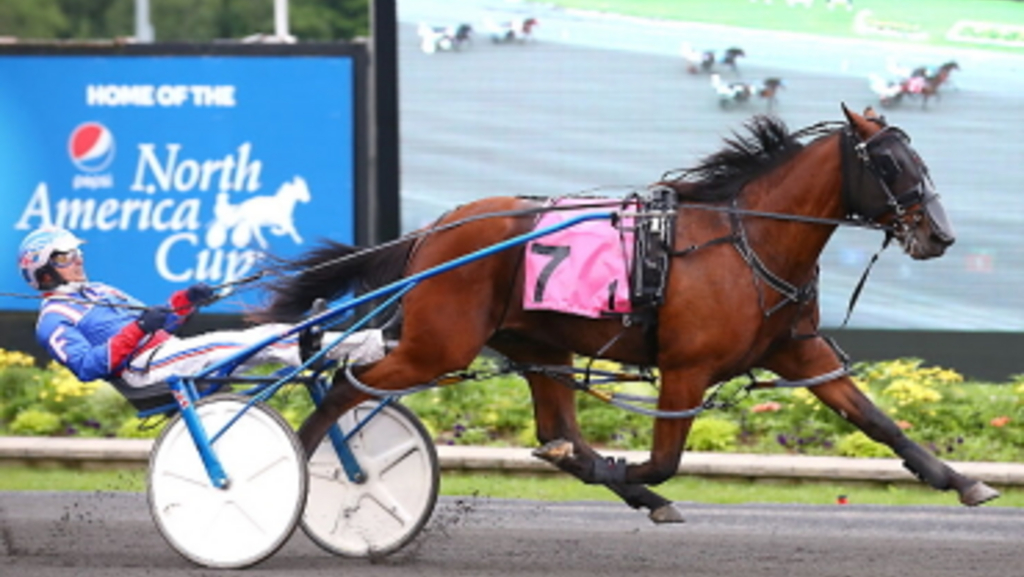 Two-year-old pacing colts were featured at Woodbine Mohawk Park on Friday, July 9, competing in five $22,500 Grassroots divisions, and Bob Loblaw kicked things off in the first race with a 1:54.2 score.

Starting from Post 7 with Sylvain Filion in the race bike, Bob Loblaw hustled away from the starting gate and led the field of 10 to a :28.3 quarter. Silk Road Smash swept to the front heading for the :58 half and carried on to a 1:27.1 three-quarters with Bob Loblaw on his heels. Coming off the final turn Filion tipped Bob Loblaw out from behind the pacesetter and the gelding responded with a :27 last quarter that saw him hit the wire three and one-quarter lengths ahead of co-favourites Up The Creek and Silk Road Smash.

“Knock on wood, he trained down as good as any horse I've ever had,” said Woodbine Mohawk Park announcer Ken Middleton who bred, co-owns and trains Bob Loblaw. “He has a great personality. He likes to work, he always went forward when you asked him to training down and he has a pretty good attitude about everything.”

Middleton and the late Bill Galvin, a member of the Canadian Horse Racing Hall of Fame in the Communicator category, bred the son of Sunshine Beach and Lady Marina. The long-time voice of Woodbine Mohawk Park shares ownership of Bob Loblaw with David Walls and James Grant of Sarnia and Starting Centre Stables of Cambridge, ON.

“He's still green like a lot of young horses, but he seems to be getting better every time he comes to Mohawk,” said the Cambridge resident. “It's a bonus to get a guy like Sylvain Filion in the bike, as well. Not only is he an incredible talent in the bike, but he provides great feedback when he gets off the bike and hands you the lines. He's been doing this a long time, and when he talks it's wise to listen.”

Prior to Friday’s start, Filion had piloted Bob Loblaw in two qualifiers and a June 25 overnight event where he finished a fast-closing sixth.

Milton, ON resident Filion also captured the third $22,500 Grassroots division with Stews Watching. Sent off as the fan’s top choice, Stews Watching left well from Post 10 and was able to take command just after the :28 quarter. The Hes Watching son reached the half in :58.3 and then fought off a challenge from Hashtag Watch Me on the way to the 1:27 three-quarters before drawing away to a three and one-quarter length win in 1:55. Nassau Hanover and ATS Hanover rounded out the top three.

Filion piloted Stews Watching to the win for trainer Dr. Ian Moore of Cambridge, ON and owners Ratchford Stables NS of North Sydney, NS, who purchased the colt from last fall’s London Virtual Yearling Sale for $32,750.

A 1:56.3 winner in his July 1 debut, Kolby Two Step was the heavy favourite and the son of Betterthancheddar did not disappoint his backers, sprinting from fifth to first in the last quarter to score a three and one-quarter length win in 1:54.2. My Blueberry Buck finished second and Almost There Boss was three more lengths back in third.

“He’s a very fast horse and as a bonus he’s got a very good head on his shoulders,” said McClure. “Two fingers to drive and he’s always ready when you ask him.”

Grafton resident Timothy Gillespie trains Kolby Two Step and shares ownership of the gelding with Jason Churchill of Colborne, ON. The partners offered up $12,000 for the gelding at last fall’s Ontario Select Yearling Sale.

In the fourth division, lightly rated Dynomites Peak made an even bigger rush from the backfield than Kolby Two Step, kicking home in :26.3 to go from seventh to first. The second longest shot on the board, Dynomites Peak stopped the teletimer at 1:55.1 and forced fan favourite Contact Zone to settle for second, one-half length behind the leader. Lyons Pride was hot on their heels in third.

“He’s a fast horse,” said McClure, who was making his first appearance in the gelding’s race bike. “He had to do a lot of work to make it from back there. Hopefully he stays good all summer.”

Robbie Robinson had driven Dynomites Peak in his first two starts, both at Rideau Carleton Raceway, and trains the Artspeak son for Jacqueline Dinelle and Paul Smyth of Metcalfe and Earl Casselman of Winchester, ON. Dynomites Peak was a bargain-priced $7,000 yearling at the Ontario Select Sale.

Driver Scott Young prevented neither McClure nor Filion from making it a Grassroots hat trick in the last division. The Guelph, ON resident piloted Stone Carver to a 1:55.1 victory, finishing one length ahead of fan favourites McClure and Stonebridge Helios and another three-quarter lengths ahead of Filion and Sport Addiction.

“Stone Carver is a handy little guy that aims to please you,” said Young. “I couldn’t be happier with his performance tonight.”

The two-year-old pacing colts will make their second Grassroots start at Grand River Raceway on July 19.