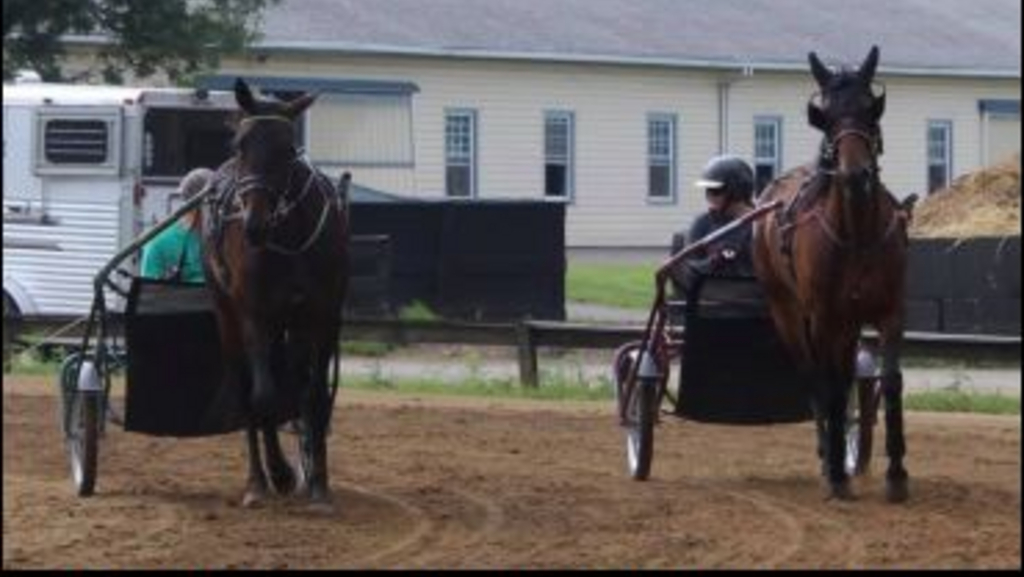 The absolute onslaught of qualifying races continued on Monday, June 8. Dozens upon dozens of races showcased a cross section of raceway horses, up and comers, returning stars, and some progeny from first-crop stallions.

Gaitway Farm in New Jersey was busy, yet again, on Monday. The one-mile track proved to be the epicentre of Monday's qualifying action, as it was the scene of no less than 26 qualifying dashes.

Two-year-olds took to Gaitway for the first seven races on the docket, and offspring by first-crop sires Always B Miki, Bar Hopping and Betting Line each took a turn hitting the wire first. Each of the three winners were fillies trained by Julie Miller and driven by Andy Miller.

Race 3 saw two-year-old Bar Hopping lass Pub Crawl take a three-hole ride for the Millers and get up for a nose victory in 1:57.4 off of a :27.4 final quarter. The bay is owned by Andy Miller Stable Inc., Louis Willinger, Kapildeo Singh, and Phillip Helmuth.

Two-year-old Betting Line filly Darby Hanover came first-up from third in her qualifier (Race 6) and went on to post a 1:57 victory off of a :26.2 final quarter for the Millers. The margin of victory was one and a quarter lengths. The filly is owned by Andy Miller Stable Inc. and Caroll Huffman.

Two-year-old Always B Miki filly Always B Laughin was next up at Gaitway for the Millers, and went on to turn a pocket trip in Race 7 into a neck victory. The juvenile lass came home in :27.2. Always B Laughin is owned by George Green.

The Pepsi North America Cup eligible Force N Fury (55-1 in Trot Magazine's spring book) was tops in Race 13, as the Captaintreacherous colt fired from a second-over trip to post a one and a half-length victory in 1:54.1. Dexter Dunn was in the bike behind the Tony Alagna trainee, who paced home in :26.3 to get the job done. Force N Fury is owned by Marvin Katz, Brad Grant, and Al Libfeld.

Standout female pacer Zero Tolerance notched the first qualifying win of her 2020 campaign in Race 15, as the daughter of Heston Blue Chip uncorked a wire-to-wire, six and a half-length win in a sharp 1:51.2. She paced her first three quarters in a combined 1:22.2 and was under wraps in :29 coming home for driver David Miller, trainer Joe Holloway, and owners Val Dor Farms and Ted Gewertz.

Star five-year-old trotter Atlanta romped in Race 16 for driver Yannick Gingras and trainer Ron Burke. The two-million-dollar career earner captured the contest in gate-to-wire style. She started with a :57.1 opening half and proceeded to zoom home in :54.3. The margin of victory was 14 and a quarter lengths and the win time was 1:51.4. The sparkling daughter of Chapter Seven is owned by Crawford Farms Racing, Brad Grant, and Howard Taylor.

The Millers were at it again in Race 17, as the great Homicide Hunter stretched his legs a bit and trotted to a wire-to-wire, one and a quarter-length win in 1:56.2. The victory was the eight-year-old Cantab Hall gelding's second qualifying effort of the season. Homicide Hunter is owned by Crawford Farms Racing.

American History followed up De Los Cielos Deo's performance with a little speed of his own, as the five-year-old son of American Ideal raced on the point before hitting the wire in 1:50.3. Joe Bongiorno was in the bike behind the Tony Alagna trainee, who posted a 13 and three-quarter-length margin of victory. American History is owned by Brittany Farms LLC, Marvin Katz, and American History Racing.

A pair of notable pacers trained by Ron Burke and driven by Yannick Gingras helped cap off the session, as Filibuster Hanover and Sintra won Race 22 and 23, respectively. Both of the speedsters posted wire-to-wire wins. Filibuster Hanover stopped the clock in 1:51, while Sintra followed that up with a 1:51.2 mile.

Another notable horse to

Another notable horse to qualify at Gaitway yesterday was Covered Bridge, who's unbeaten as a 4YO and has already paced a mile this year in 1:48.3. He picked up right where he left off in March, winning effortlessly by 11 and a half-lengths in 1:51.2. We'll probably see him in The Graduate, at Tioga, on 6/21.