The $50,000 eliminations drew a total of 19 'Cup' hopefuls. The top five finishers from each elimination will qualify for the final.

In addition, the connections of the elim winners will get to select a post position before the balance of the field is drawn on Tuesday, June 12 at Mohawk, when New York Rangers’ defenceman Michael Del Zotto will be the guest drawmaster.

Last year, Up The Credit, driven by Jody Jamieson for his father Carl, who was both the trainer and co-owner, won his elim by a half-length, then came back a week later to capture a wide-open Pepsi North America Cup by one length over Roll With Joe in 1:49.3. 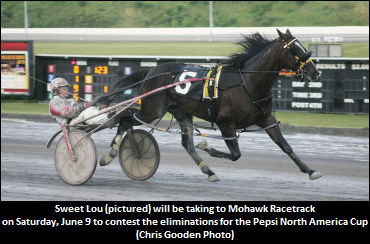 The second elimination at 9:37 p.m. is headed by Sweet Lou (PP1, Dave Palone), who won 10 of 12 outings last year for trainer and co-owner Ron Burke, including last year’s Breeders Crown at Woodbine Racetrack, where he romped by seven and one-half lengths in a World Record 1:49. The son of 2003 Cup winner Yankee Cruiser banked $688,117 in 2011 for owners Burke Racing Stable, Weaver Bruscemi, Lawrence Karr and Phillip Collura.

This year, Sweet Lou, who was acclaimed champion two-year-old pacer in the United States (Dan Patch Award), is perfect in two starts, having won Pennsylvania Sires Stakes by daylight at Pocono Downs and The Meadows.

Warrawee Needy makes a much anticipated return to the races for trainer and co-owner Carl Jamieson. Last year, the son of E Dees Cam starred in the Ontario Sires Stakes program and won nine of 12 starts and $535,000, en-route to an O’Brien Award as Canada’s top two-year-old pacing colt. His victories included three OSS Gold finals and the $300,000 OSS Super Final, November 12 at Woodbine.

After two qualifiers this year, including a 1:49.2 mark May 10 at Mohawk, Warrawee Needy was headed to the Upper Canada Cup elims at Georgian Downs on May 19, but became sick and was scratched.

“‘Needy’ was sick, but it's been resolved now and I trained him on Saturday morning,” said Jody Jamieson. “He trained like an absolute monster in 1:54. We would have loved to have two starts into him over Georgian, but it wasn't in the cards, so we are going to have to go into the Cup off that qualifier.

“I don’t know if anyone considers him a World Champion, but he’s the greatest horse I’ve ever driven. I expect him to be very good, win his elimination and be picking my post (for the final).”

The Jamiesons will be trying to duplicate their success last year in both the elim and Pepsi North America Cup final, which they won with Up The Credit. Jody also steered Tell All to a Cup win in 2007.

“It would be great [to win another cup with my father]. Dad keeps a pretty low profile, he doesn't get worked up over those things. I don't think it's ever been done with a father-son combination.”

Simply Business, a son of 2005 Cup winner Rocknroll Hanover, also enjoyed a banner two-year-old season, as he won four of his eight starts for trainer Jimmy Takter, including the $1-million Metro Pace at Mohawk in 1:50.1, for earnings of $672,462.

This year, although winless in three outings, Simply Business signaled a return to form with a closing third-place finish, only a neck behind Time To Roll and A Rocknroll Dance in the $150,000 New Jersey Sire Stakes, June 2 at the Meadowlands Racetrack, despite being parked for most of the mile and suffering interference in the stretch.

The first elim at 8:34 p.m. not only has the winners of last weekend’s Somebeachsomewhere Stakes (formerly the Burlington Stakes) --- Michaels Power and Secretsoftheknight --- but also A Rocknroll Dance, Pet Rock and Time To Roll.

A Rocknroll Dance (PP6, Yannick Gingras) enters his elim off a nose loss to Time To Roll in the June 2 New Jersey Sire Stakes at the Meadowlands. Last year, the son of Rocknroll Hanover won seven of 11 starts, including the $510,000 Governor’s Cup at Harrah's Philadelphia, while banking $858,961 for trainer and co-owner Jim Mulinix.

Time To Roll (PP7, Andy Miller), another son of Rocknroll Hanover, is perfect in two starts this year, after racing only three times at two. Owned by Lothlorien of Cheltenham, Ont. and trained by Jimmy Takter, Time To Roll took his career mark of 1:50 last week at the Meadowlands. Lothlorien has three previous Cup wins, as a partner with Jeffrey Snyder in Red River Hanover (2002), Rocknroll Hanover (2005) and Well Said (2009).

Pet Rock (PP2, Brian Sears) comes off a half-length score in the Art Rooney Pace at Yonkers Raceway in 1:51, his second win in three starts this year. The son of Rocknroll Hanover has not been worse than second in his eight career outings for trainer Virgil Morgan Jr.

Michaels Power (PP1, Scott Zeron) stayed unbeaten in four starts this year with a comfortable two and one-half length score in a division of the Somebeachsomewhere Stakes last Saturday at Mohawk. The son of Camluck, who previously had taken the $600,000 Upper Canada Cup at Georgian Downs in a career best 1:50 on May 26, is trained by Casie Coleman for owner-breeder Jeffrey Snyder.

Secretsoftheknight (PP3, Doug McNair) scored an 8-1 upset in his division of the Somebeachsomewhere Stakes, his second win in six starts this year for trainer Gregg McNair.

Since 1984, sixteen of twenty-eight Cup winners also emerged victorious in their elimination, including three of the last four --- Up The Credit (2011), Well Said (2009) and Somebeachsomewhere (2008).

To view entries for Saturday night's star-studded card of harness racing, click one of the following links: