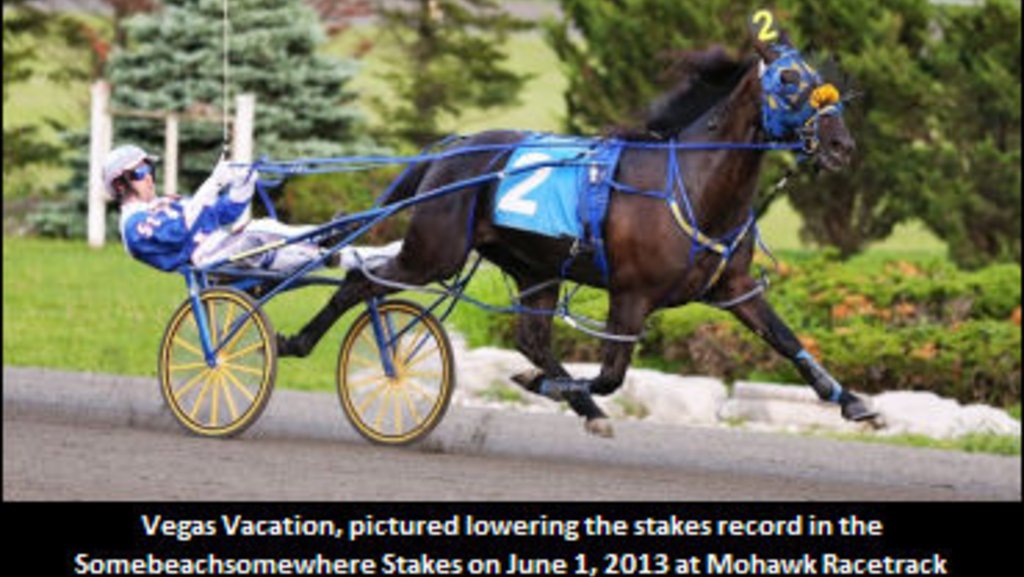 The connections of 21 of the continent's top three-year-old pacers have entered their horses to contest the eliminations for the $1-million Pepsi North America Cup. Three $50,000 elims have been drawn and will be contested this Saturday night (June 8) at Mohawk Racetrack in Campbellville, Ont.

The top three finishers from each elim --- plus one fourth-place finisher, drawn by lot --- will advance the to $1-million Pepsi North America Cup, which will take place at Mohawk on Saturday, June 15. The connections of the elimination winners will be able to pick their post positions for the 30th edition of the NA Cup.

Captaintreacherous and Sunshine Beach will highlight the first elimination, carded as Race 3.

Captaintreacherous, a son of Cup winner Somebeachsomewhere out of Worldly Treasure, has drawn Post 5 for trainer Tony Alagna and driver Tim Tetrick. After having also kicked off his season with three qualifying efforts, the bay colt made his 2013 pari-mutuel debut in a division of the Pennsylvania Sire Stakes at Pocono Downs on May 19. After having gone to the lead in the second quarter of the mile, 'The Captain' drew off to an open-length score in a sharp 1:49.4.

Sunshine Beach, another son of Somebeachsomewhere but out of Light Up, has drawn Post 6 for trainer Mark Steacy and driver Chris Christoforou. The bay colt has jumped up with a couple of big efforts to kick off his sophomore campaign. He debuted against conditioned company at Mohawk and won handily in 1:50.2, and followed that effort up with a hard-closing 1:49.2 win last weekend in his division of the Somebeachsomewhere Stakes.

The second elimination, Race 7, will feature Rockin Amadeus and Wake Up Peter.

Rockin Amadeus, a son of former Cup winner Rocknroll Hanover out of the hard-knocking stakes mare Kikikatie, has drawn Post 4. The Jimmy Takter-trained and Yannick Gingras-driven colt is two-for-two so far this season, having recorded a pair of sub-1:50 victories in New Jersey Sire Stakes action at the Meadowlands Racetrack.

Wake Up Peter, another son of Rocknroll Hanover but out of Lovely Lady, will start alongside Rockin Amadeus in Post 5. The colt, trained by Tony Alagna and driven by Ron Pierce, has raced in three NJSS events so far this season, but has yet to reach the winner's circle. He was beat just a half-length after pacing in 1:50.1 in his seasonal debut, and most recently paced in sub-1:50 fashion (1:49.4) during a one-length loss to Rockin Amadeus.

Race 9, the third elimination, will be headlined by Vegas Vacation and Odds On Equuleus.

Vegas Vacation, a son of former Cup winner Bettors Delight out of Dont You Smile, has drawn Post 1 for trainer Casie Coleman and driver Scott Zeron. The brown gelding is three-for-three so far in 2013 and has already recorded two victories in sub-1:50 fashion. He is coming into his NA Cup elim fresh off a stakes-record 1:48.3 mile in his division of the Somebeachsomewhere Stakes last weekend at Mohawk.

Odds On Equuleus, a son of Art Major out of Latte Lady, has drawn Post 4 for trainer Robin Schadt and driver John Campbell. After having prepped for his three-year-old campaign with a trio of sharp qualifying efforts, the bay colt made his pari-mutuel debut last weekend in the Somebeachsomewhere. In his split, Odds On Equuleus went to the front and put up some hot middle fractions before finishing out of the money, pacing his mile in 1:50.1.

Sportsnet will air the Pepsi North America Cup on The Score. The one-hour broadcast, a joint production of the Woodbine Entertainment Group and Sportsnet, is scheduled for 9:00 p.m. (EDT), with the race set for 9:42 p.m. It will be the first time that a standardbred race will be shot and aired live in high-definition (HD) in Canada.