See You At Peelers Beats The Boys In Rooney 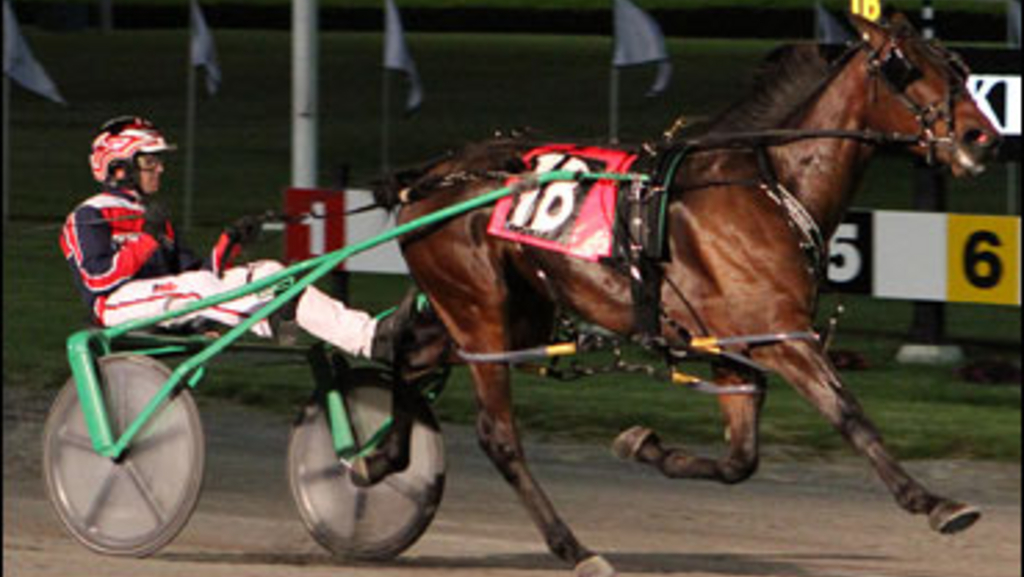 Yonkers Raceway hosted a 'Sweet 16' celebration Saturday night...and the guest of honour did not disappoint. The undefeated filly See You At Peelers beat the boys and made 'em cry, winning the $307,734 Art Rooney Pace for three-year-olds in convincing fashion

With Marcus Johansson driving for his father-in-law, trainer Jimmy Takter, "Peelers" made short work of the 21st edition of the Rooney while running her resume to 16-for-16.

See You At Peelers was the first filly ever to race in the Rooney since the event's inception in 1989--thus, the first filly to win it--as well as harness racing's first "perfect" horse to come into, and out of, this race.

Leaving from post position No. 5 as the strongest third of a 1-20 entry, "Peelers" floated into an early three-hole. Line Officer (George Brennan) made the first move, grabbing advantage in the first turn. Johansson moved his lass a second time, gaining the front right at the :28.4 opening quarter-mile. Next came a :58-second half, with Rollwithitharry (Ron Pierce)--joined with "Peelers" and Line Officer in the wagering troika--moving from fourth.

See You At Peelers maintained her open lead at the 1:25.4 three-quarters, bumping the margin to three lengths turning for home. All that was left was the final margin, which was three and a half lengths, and the timer, which read 1:53.1, punctuated by a Johansson fist pump.

For See Your At Peelers, a New York-bred daughter of Bettors Delight co-owned by (breeder) Christina Takter of East Windsor, New Jersey, along with Jim and John Fielding of Toronto, Ont., she returned the requisite $2.10 for her third win of her sophomore season. The exacta paid $6.90. By way, the race attracted a win pool of $77,376...$73,167 of which was wagered on the death and taxes distaffer.

According to U.S. Trotting Association research, "Peelers" is also the first pacing lass to whip the boys in a six-figure race dating back to at least 1992 (encompassing 31 occasions prior to this one).

"She’s just as amazing animal," Johansson said. "I just wanted to take it slow leaving with her, but once I made the lead, her mind was all business.

"It's a great win for her, and she deserves all the credit. For me to drive her is just unbelievable."

"I've been around some terrific horses, and she doesn't take a big seat to any of them," Takter said. "She raced six days ago--sub-1:50 (life-best 1:49.2 last Sunday in Empire Breeders Classic at Tioga)--and to come back and beat some talented colts this way, I don't know what else to say....and she beat them badly.

"This was a very prestigious race for us, and we're very proud to win it. We plan to be back again [for New York Sire Stakes]."

Leaving from post position No. 5, she was stuffed into an early seat by pole-sitting Honky Tonk Woman (George Brennan). The even-money favourite put down a pedestrian pedal, to the tune of a :28.3 opening quarter-mile and :57.3 intermission.

Coming toward the half, Cold Mist (Ron Pierce) moved from third, looking to the engage the leader. Honky Tonk Woman found three-quarters in an unpressured 1:26, getting no outside angst whatsoever. In fact, Character Flaw (Dan Dube), entrymate to Cold Mist, was gapping second-over.

That left Hanky Tonk Woman with a length-and-a-quarter lead turning for home. Unfortunately, it also left her with no excuses, as JK Owhatanite eased out and eased by. "Owhatanite" widened to a two and a half length win in a life-best 1:53.3, with Honky Tonk Woman clearly a bridesmaid. It was more than six lengths back to Dreamlands Roxy (Jeff Gregory), with Cold Mist and Block Party (Jim Pantaleano) rounding out the payees.

For JK Owhatanite, a homebred daughter of Bettors Delight owned by New York's 3 Brothers Stable and trained by Linda Toscano, she returned $7.90 (third choice) for her second win in three seasonal starts. The exacta paid $22.20, with the triple returning $101.50.

In her previous start, JK Owhatanite won a mile-and-one-sixteenth overnight race at Yonkers in a track record (2:00) for her age and gender.

"She's just a simple horse to drive, does whatever you ask," Bartlett said. "The best thing about her is her gate speed, and I wanted to get her involved early. Once I showed her racetrack, she did the rest."

"This is the race we've been pointing to," Toscano said. "We knew she was best on a small track, and I wanted to be make sure she was ready.

"I couldn't be happier. It's great when a plan works out."

In regular racing action, the Casie Coleman-trained Clowns Smile prevailed by a head over Urgent Action in 1:59 over 1-1/16 miles in the $43,000 Open Handicap Pace. Eric Goodell did the driving for the West Wins Stable of Cambridge, Ont.

(With files from Yonkers Raceway)

Wow! what a beauty this

Wow! what a beauty this filly is 16 for 16 and beating some quality colts and geldings looking forward to seeing how she does the rest of the season. And what a great name for a filly "See You at Peelers".