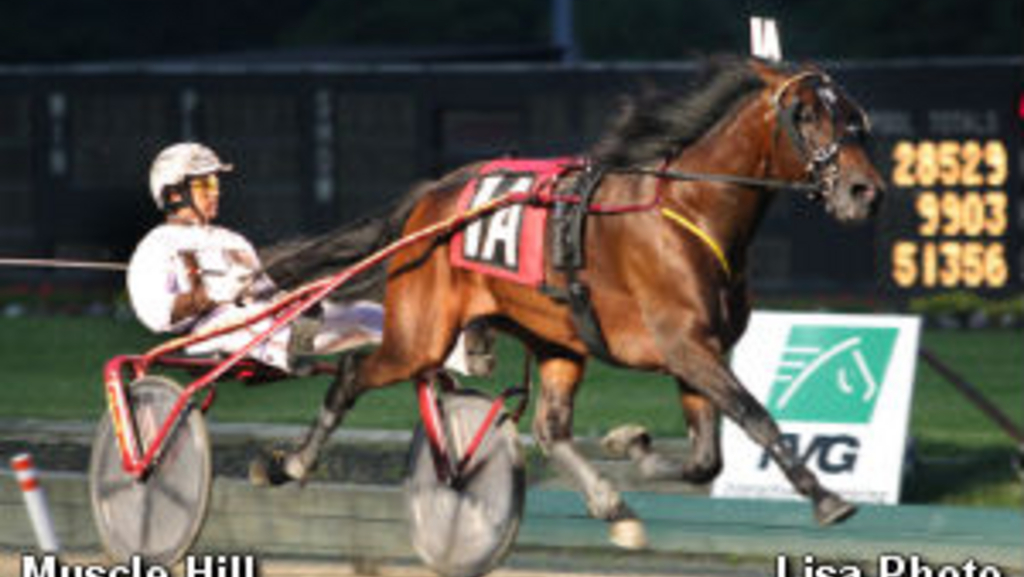 The win streak is now nine-in-a-row for the multi-talented Muscle Hill, who kicked off his sophomore

season with a 1:53.1 romp on Thursday in a $54,900 division of the New Jersey Sires Stakes at The Meadowlands.

Muscle Hill, who capped off his freshman season with a World Record performance of 1:53.3 in the $700,000 final of the Breeders Crown, returned to the scene of that victory and demolished eight sophomore rivals for the duo of driver Brian Sears and trainer Greg Peck.

Sears floated the son of Muscles Yankee – Yankee Blondie into a mid-pack position while The Chancellor laid down a :28-second opening panel. Sears tipped off the pylons as the field rolled to the half-mile point, which flashed up in :56.4 compliments of the front-striding The Chancellor.

Muscle Hill flexed his pecs and motored to the top going into the final turn, and he promptly started to pull away. He was on top by a comfortable margin at the three-quarter pole in 1:25, and when he hit the line in 1:53.1 it was nearly four lengths back to runner-up The Chancellor. Third prize went to Howthehaloareyou.

“Physically he’s grown up and filled out, he looks fantastic,” said driver Brian Sears. “He’s maturing and getting faster and his manners have always been great, so things are going the right way. It was his first start back, he heard Andy [Andy Miller driving The Chancellor] chasing his horse a little bit, and he just went away on his own.”

“This is the best crop I’ve ever seen,” said trainer Brian Peck. “That’s what we talk about. It is going to be a tough year, you have Explosive Matter who has come back and Federal Flex has come back good. I see a good horse today in Mr Cantab that nobody’s even talked about, and we saw an undefeated horse in here tonight – so there’s going to be a lot of good ones and we’re aware of them.

“We’re going to go straight through The Meadowlands with him,” added Peck. “We have the final of the Sires Stakes and then there’s a gap in between there and the Dancer. So we’ll have to see what we’re going to do between then, but we’ll cross that bridge when we come to it.”

Muscle Hill, who is owned by Jerry Silva, T L P Stable, Southwind Farm and Muscle Hill Racing LLC, is now a nine-time winner in 10 career starts. He finished his rookie year with more than $817,000 in earnings. 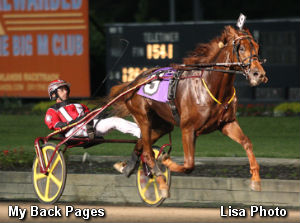 Trainer Greg Peck watched Muscle Hill’s stablemate My Back Pages, a son of Revenue S – Windsurfing V C, trot to a 1:54.2 victory in his $54,900 division of the NJSS. George Brennan engineered the front-stepping score with the chestnut colt who delivered on his even-money promise over Homer Jay and Select Yankee.

“I think he could do it either way, but it was the place to be,” said driver George Brennan when asked about employing front-end tactics. “I ducked in third with him and knew Schnittker [Ray Schnittker driving Homer Jay] wanted some cover so I moved him to the lead and got an easy half and he trotted home strong. He was pretty handy; he felt pretty good. I think he’s going to get better, he don’t make any mistakes and he’s really good-gaited and he can leave really good.”

Irving Bork, T L P Stable and Jerry Silva share ownership on the lightly-raced youngster, who has put together a 2-3-0 record in his first five starts of the season after failing to hit the board in two starts during his freshman campaign.