O’Brien Winners Clean Up At Mohawk 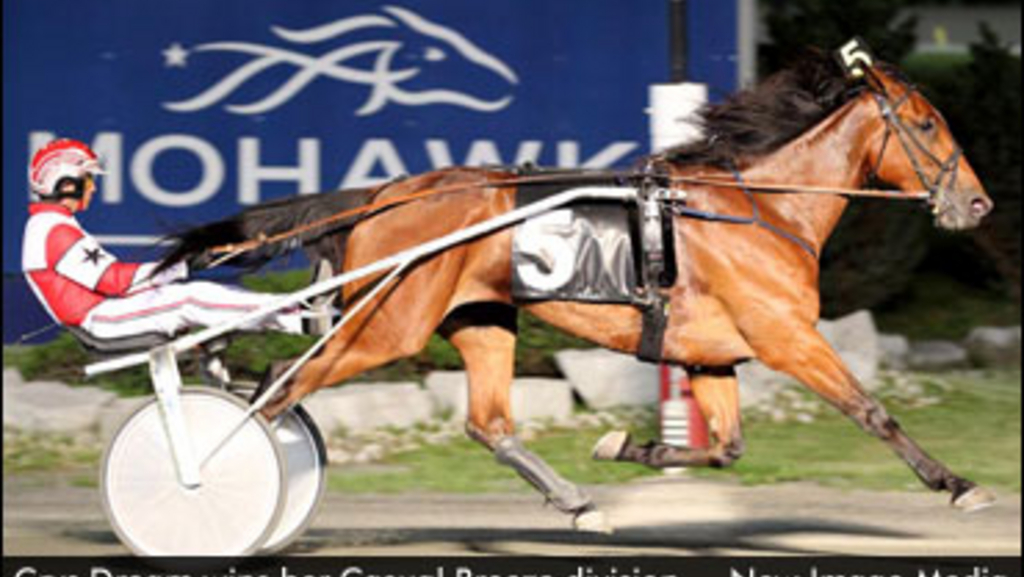 Lukes Sophie and Crys Dream, Canada's 2010 Two-Year-Old Trotting Filly of the Year, kept their 2011 records intact with a pair of victories in their respective $86,781 divisions of the Casual Breeze Stakes for three-year-old trotting fillies.

Following a recall at the start of the first division featuring an 11-horse field, Lukes Sophie floated off the gate from Post 9 with a few inside starters, Pretty Crafy (Mario Baillargeon) and Mystic Allure (Jack Moiseyev), making early breaks. The 2-1 second choice and driver Jody Jamieson reached the top past the :28.3 opening quarter mark ahead of Surveillance (Randy Waples) while L A Freeway (Paul MacDonell) also jumped it off from third.

As Lukes Sophie raced past the half in :57.4, odds-on favourite Beatgoeson Hanover (Scott Zeron) tipped to the outside flushing Lady Rainbow (Rick Zeron) from third. That filly applied pressure to three-quarters in 1:26.1 and into the stretch, but Lukes Sophie held her at bay to score in a career-best 1:54 flat. Beatgoeson Hanover finished one length behind and Lady Rainbow was third.

Lukes Sophie paid $6.80 to win. The daughter of Here Comes Herbie has won four in a row this year, including a sweep of her Ontario Sires Stakes Gold elimination and the final at Western Fair Raceway at the end of May.

When asked whether the recall left Jamieson concerned that his filly may have got a little worked up before the race, Canada’s leading money earning driver said, “Yeah absolutely, I think everybody had the same concerns. I think it affected probably three or four of them behind the gate, but c’est la vie I guess. That’s racing and that stuff can happen. Like I’ve said before in London, she’s just a constant professional. She’s got a little bit of issues and has been hurting a little, but she tries her heart out.

“I suppose it’s awful to say, but I was happy to see some runners on the inside,” said Jamieson in reference to his Post 9 starting spot. “That gives you some space when you’re bolting out of there, but we weren’t really going any -– I think the eighth was in :13 and a piece, which a lot of the eighths are in :12 or the early :13s. I just let her float up there. I figured I could get to the lead and control the race. She was really strong on the lead and fought hard in the stretch.

“I knew Ricky was there. Coming around the last turn he was putting constant pressure to me, but I didn’t know where Scotty was with that good filly. Right at the top of the stretch when Scotty was off cover I thought he might have had me measured, but my filly, like I said, she digs in all the time. She’s seems to be a real top filly right now.”

Just as Peach Martini cleared, Crys Dream swept right past her to take over command at the :58.1 half-mile mark. The daughter of Taurus Dream-Crystas Image soared past three-quarters in 1:27 and pulled away easily to a five and a half length victory in 1:55.3. 87-1 longshot Eagle Canada (Doug McNair) journeyed first over to place ahead of Peach Martini.

“Thankfully there were no challengers, but there will be plenty of that later on this year," said Ouellette in the winner's circle. "We didn’t have to use her hard tonight. It will soon come, but I’m glad we didn’t have to race her that hard.”

Crys Dream paid $2.20 to win as the heavy favourite. The Henrik Hollsten trainee, who won her season’s debut by 20 lengths in mid-May, went seven-for-eight in her freshman year earning nearly $600,000. Among her victories were the Peaceful Way Stakes and Goldsmith Maid. She is owned by breeder Reve Avec Moi Dreamwithme of Grand Valley, Ont. along with Deo Volente Farms LLC and T L P Stable of New Jersey, and Jerry Silva of New York.

Earlier on the card, another O’Brien Award winning filly put forth a winning performance. Idyllic, the 2010 Two-Year-Old Pacing Filly of the Year, made her sophomore debut a winning one in a $25,000 conditioned pace in preparation for next weekend’s Fan Hanover eliminations.

Itstimeformetofly (Jack Moiseyev) fired off the gate from the middle of the field, but driver David Miller had the Casie Coleman-trained Idyllic on the move early, sending her to the top from the pocket around the turn. The 3-5 favourite hit the first quarter in :27.3 and carved out middle splits of :55.2 and 1:22.4. At that point, Tea Party Princess (Mario Baillargeon) launched her attack from third with Strike An Attitude (Randy Waples) following and forced wide as they entered the stretch. However, Idyllic would not be caught as she dug in to score in 1:51.1. Tea Party Princess survived an inquiry to finish second over Strike An Attitude.

Idyllic paid $3.20 to win. The daughter of American Ideal-Magical Dreamer scored her biggest victory in the She’s A Great Lady Stakes during a near perfect eight-for-nine freshman season. The $800,000-plus earner is owned by the West Wins Stable of Cambridge, Ont., Michael LaCova and Joseph LaCova of West Islip, New York and John Campagnuolo of Loxahatchee, Florida.

Dreamfair Eternal, Canada’s 2010 Horse of the Year and Older Pacing Mare of the Year, earned her first victory of her seven-year-old campaign in the $40,000 Fillies & Mares Open Pace.

With Warrawee Koine and Adaymer Seelster scratched, the field for this week’s edition of the Mares Open was reduced to five. With regular reinsman Randy Waples in the bike, 3-5 favourite Dreamfair Eternal took command and carved out early fractions of :28 and :56.2 with the field in single file alignment.

At the half, driver Dave Miller sent Western Silk, last year’s Three-Year-Old Pacing Filly of the Year, first up from fourth and went head to head with the pacesetter past three-quarters in 1:24. Reigning Fan Hanover champion Western Silk gained the upper hand in the stretch, but Dreamfair Eternal fought back to prevail in 1:51 by a head. Western Silk finished second in her four-year-old debut and Go Get Her (Sylvain Filion) was third.

Dreamfair Eternal paid $3.40 to win. The Camluck-J Cs Nathalie mare, a winner of 46 races and over $1.7 million, is trained by Pat Fletcher for owner and breeder John Lamers of Ingersoll, Ont.