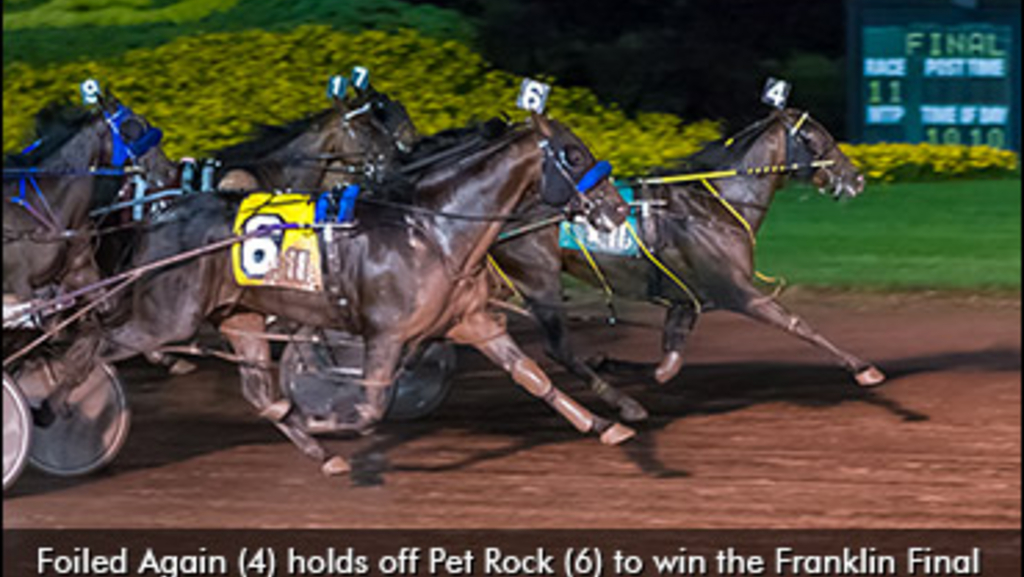 Pocono Downs’ Sun Stakes Saturday started off fast and furious with four world record performances during the first half of the program before some of the sport’s biggest names took the spotlight in a quartet of rich stakes finals contested over a racing surface downgraded to sloppy after a rainstorm rolled in.

Driver Tim Tetrick fired 3-2 favourite I Luv The Nitelife off the gate from post eight and the duo worked to the lead around insider Nikki Beach (Ron Pierce) and breaker MS Caila J Fra (Simon Allard) into a :26.3 opening panel over the sloppy surface.

The Fan Hanover champion gave way to Shebestingin (David Miller), who rushed to command during the second panel, and followed the new leader past the half in :54.1 and three-quarters in 1:21 while Charisma Hanover (Matt Kakaley) applied first over pressure.

Shebestingin maintained the lead into the stretch, but Tetrick pulled I Luv The Nitelife from the pocket and the Rocknroll Hanover filly blew by to score in 1:50 flat and earn millionaire status. Shebestingin stayed for second while Jerseylicious (Corey Callahan) rallied home to show.

The Chris Ryder trainee is now five-for-six on the year for Florida owners Richard and Joanne Young.

“I had a feeling that one way or another she was going to get where she needed to go,” said Ryder. “She got the right spot and it worked out. He drove her perfect and she’s a special horse.”

I Luv The Nitelife completed a Lynch triple for winning driver Tetrick, who also captured the 2007 edition with Southwind Tempo and last year's race with American Jewel.

O'Brien Award winner Captaintreacherous overcame an outside post position over the sloppy track to add the $500,000 Max C. Hempt Memorial Pace to his resume.

Continuing his perfect sophomore season, the North America Cup champion provided Tetrick with back-to-back stakes victories on the card, getting up to score in 1:49.2 over the late-closing Vegas Vacation (Brian Sears) and Sunfire Blue Chip (Yannick Gingras).

Rockin Amadeus (Ron Pierce) put up a :26-second opening panel before the parked out Sunfire Blue Chip cleared to command with Word Power (Corey Callahan) hot on his heels and 7-5 favourite Captaintreacherous positioned perfectly in the second over spot.

Sunfire Blue Chip led the field through middle splits of :53.3 and 1:21 with Word Power battling for the top spot to his outside. But Tetrick sent Captaintreacherous three-wide into the stretch and powered home to score by a neck with Vegas Vacation coming on from the backfield to make it a close finish.

Tony Alagna trains the son of Somebeachsomewhere, who pushed his bankroll to $1.73 million, for the Captaintreacherous Racing ownership group.

“He was tremendous,” said Alagna. “To do what he did over this track the way it is after the downpour, if that’s not a mile in [1]:47 then I don’t know what is on a good track. To be out as far as he was over this, it’s a monster mile."

Foiled Again prevailed in a photo finish to earn his 70th career win and surpass the $5 million earnings mark in the following $500,000 Ben Franklin for open pacers.

The nine-year-old son of Dragon Again became the first pacer to surpass $5 million in career purse money and the first standardbred to make $5 million on one continent.

Razzle Dazzle (Brian Sears) then advanced from fourth to take over command at the :54.1 half-mile mark leaving and advancing Foiled Again first over with Up The Credit (Jody Jamieson) and favourite Pet Rock (David Miller) following his cover.

The iron tough Foiled Again moved up alongside Razzle Dazzle to apply pressure as they neared the 1:21.1 third quarter mark and wore down the leader into the stretch before holding off the late-rallying Pet Rock to win in 1:49.2 by a nose. Razzle Dazzle settled for third over one length behind.

“I don’t mind first over,” said Gingras. “That’s his trip; he likes that actually. No offense, but Razzle Dazzle, I’ll take my shot. He’s a great horse on his own, but Foiled Again is special. They were pacing pretty good in the second turn and [Razzle Dazzle] got a little bit of a jump, but I figured I’d catch up to him.

“I just want him to get the recognition he deserves. A lot of people think he’s a small-track horse, or this and that, and maybe they’re right a little bit, but at the end of the day he’s not the fastest horse, but he outlasts every one of them. He’s been through about three different groups of horses, guys that retired or went to stud, and he’s still around and banging and kicking [butt] against some four-year-olds.”

Corky closed out the stakes action with a first over victory in the $500,000 Earl Beal Jr. Memorial Trot for three-year-olds.

Favourites Dontyouforgetit (Yannick Gingras) and Smilin Eli (Tim Tetrick) traded turns on the lead through a :28.1 opening panel while Corky and David Miller watched from third. The son of Muscles Yankee waited until the field passed the half in :57.1 to make his move.

Miller sent Corky first over with Possessed Fashion (John Campbell) following his cover and moved up to challenge the leader at the 1:25.2 third quarter station. Down the stretch, Corky began to edge out in front while Dontyouforgetit found room to slip up the pylons. But it was Corky who prevailed in 1:54.3 by one length. Picture This (Charlie Norris) came through for second, edging out Dontyouforgetit in the photo to place.

Jimmy Takter trains the Hambletonian contender for his wife Christina Takter of New Jersey and co-owners John and Jim Fielding of Toronto.

“He’s a very laid-back horse,” said Takter. “I always knew he had something deep within him; he’s been very consistent. He’s coming into himself right. He ended up with some bad luck last year. He got like a thousand warts on his hind legs -- I've never seen anything like it -- and thank you [veterinarian] Patty Hogan. She had to burn them away and it took a whole day for her to do it.

“I think we have a hell of a shot in the future with him. He’s been extremely good his last three starts.”

All Laid Out ($22) also journeyed first over to capture the $50,000 Beal Consolation earlier on the card in 1:53.1 by two lengths over High Bridge (Yannick Gingras) and Boffin (Charlie Norris). Andrew McCarthy drove the son of Yankee Glide for owner/trainer Noel Daley.

Prior to the storm, which resulted in the track conditions being downgraded for the stakes finals, some serious speed was on display during the first portion of the 16-race program.

Uncle Peter kicked off the card at Pocono with the fastest trotting mile ever on a five-eighth mile oval defeating Arch Madness in a dazzling 1:50.3 mile.

Heavy 1-9 favourite Uncle Peter and triple millionaire trotter Arch Madness left from posts five and six, respectively, in the $25,000 Preferred Handicap with the latter clearing to command during a :26.2 opening quarter in his second start since finishing second in Sweden's Elitlopp. Arch Madness and driver Brian Sears continued to lead the single-file field of six to the half in :55 and three-quarters in 1:22.1 with some action in the backfield beginning to develop. But as the richest Canadian-sired trotter turned for home, David Miller pulled Uncle Peter from the pocket and gave the leader a run for his money, eventually getting by for the neck victory in a world record clocking of 1:50.3. Holy Halibut and Matt Kakaley rounded out the top three finishers.

Uncle Peter lowered the all-age trotting world record on a five-eighth mile oval by one-fifth of a second. The former 1:50.4 record was set by Googoo Gaagaa at Pocono in the 2012 Earl Beal Jr. Memorial Trot last June.

Uncle Peter notched his 11th career win in 26 starts and pushed his bankroll to $796,527. The four-year-old son of Cantab Hall is trained by Jimmy Takter and owned by his wife Christina Takter of East Windsor, New Jersey, Goren Falk of Allentown, New Jersey, Sweden's Brixton Medical Ab, and Toronto's John and Jim Fielding.

All Star Racing’s Bolt The Duer ($6.80) later matched his own 1:47.4 all-age world record clocking on a five-eighth mile track in the $50,000 Ben Franklin Consolation with Mark MacDonald in the sulky for trainer Peter Foley.

The four-year-old son of Ponder followed Heston Blue Chip (Tim Tetrick) through tepid fractions of :26.2, :55.1 and 1:21 before gliding by in the stretch to win by three lengths. Heston Blue Chip stayed for second and favourite Sweet Lou (Yannick Gingras) finished third.

The time of the mile matched Bolt The Duer's own world record, originally set in last July’s Adios Stakes Final at The Meadows, and was the first ever sub-1:48 win at Pocono.

The world record performances continued through the early stages of the program as Beach Memories ($13.60) swept to command from third at the three-eighths mark in the $50,000 Hempt Consolation and never looked back en route to a 1:48.3 victory for driver Yannick Gingras and trainer Brian Brown. The son of Somebeachsomewhere matched the five-eighth mile world record for a three-year-old pacing gelding, which was set by Alsace Hanover in the 2011 Adios Final at The Meadows.

With the rain starting to fall for the $25,000 Preferred Pace in race eight, 4-5 favourite Abelard Hanover went wire-to-wire to score his seventh consecutive victory and match the 1:48 world record on a five-eighth mile track for older pacing geldings. Foiled Again set the mark in last weekend’s Ben Franklin Pace elimination.

Driver Frank Milby sent the five-year-old son of Rocknroll Hanover to the lead from post three and carved out fractions of :26.1, :53.1 and 1:19.3 en route to the two and a half length victory. Shoobees Place (George Brennan) was second while Blatantly Good (Tim Tetrick) and Escape The News (Matt Kakaley) finished third in a dead-heat.