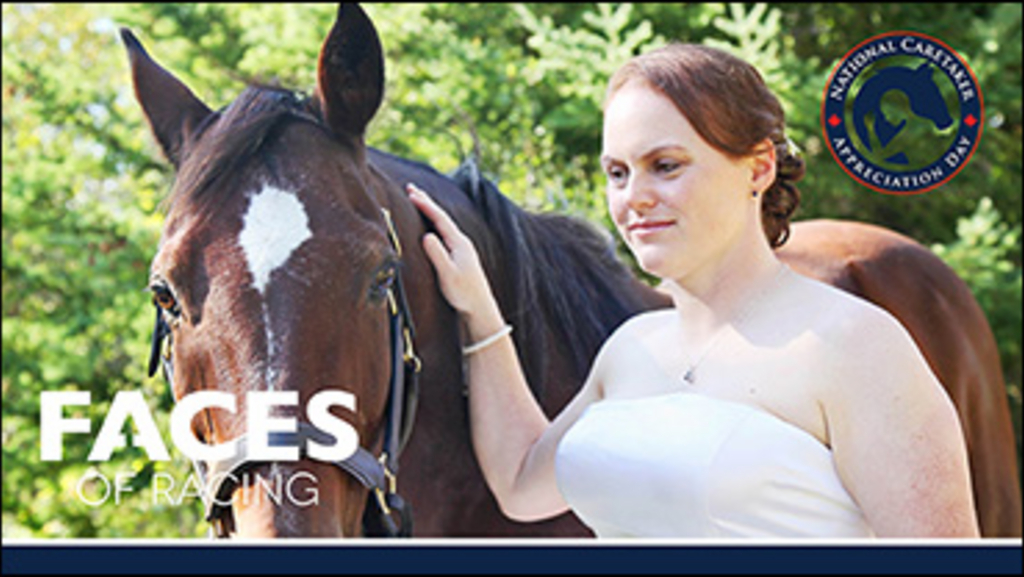 Leading up to the National Caretaker Appreciation Day event in July, Standardbred Canada will be profiling caretakers from across the country in our Faces of Racing series. 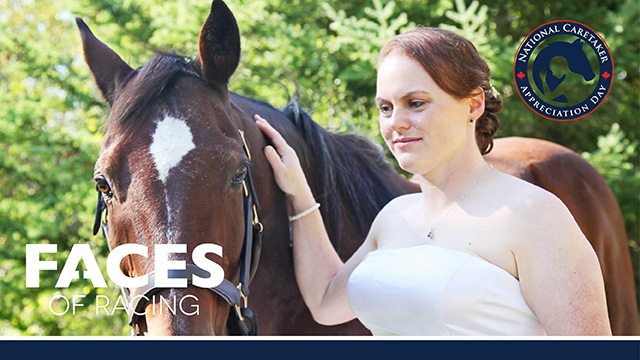 “I would not be the artist I am today if it were not for my time as a caretaker and the harness racing industry,” explained Michelle Hogan of Miller Lake, Ont., a talented equine artist whose work has received international acclaim. “Now that I am removed from the hands-on racing scene, I stay connected and live it through my art.

“As far back as I can remember, I’ve drawn horses. My parents recognized I had a talent for it and enrolled me in an adult art class when I was 10. I am predominantly self-taught. I didn’t actively pursue art on a professional level until 2005, when I entered my first juried art show -- the Harness Tracks of America Art Auction. I was accepted into the show, but it took another 10 years before I could say I achieved any level of success as an artist.” 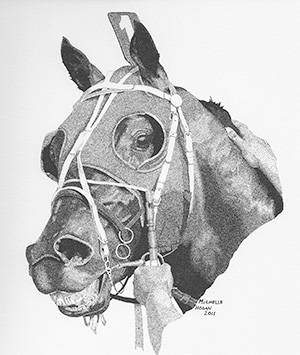 Michelle has generously donated 40 prints of her sketch, “Unchecked” to be used as prizes or gifts at a handful of tracks in Ontario for the National Caretaker Appreciation Day Event taking place across the country the weekend of July 20-22.

“Unchecked has always been about the groom’s hands,” explained Michelle, “they tell a story. Anyone who has worked as a caretaker can look at this drawing and be right back in the winner's circle. It is meant to stir emotions. They are all our hands and every horse.” The drawing was based on a photo she took at Flamboro Downs after If I Can Dream won the Confederation Cup.

“The moment I saw the first press release about the NCAD I knew I wanted to participate in some way. I worked as a caretaker for much of my life, and was very lucky to work for great people with great owners. I never felt that I was not appreciated. The little things -- a cup of hot chocolate, a photocopied win photo -- made all the difference. Not everyone sees the hard work put in by grooms behind the scenes, and often they go unnoticed. The truth is, grooms are the glue that holds the industry together. They should be celebrated and spotlighted.”

Working as a caretaker was a major inspiration and gateway to Michelle’s career as an equine artist.

When Michelle was in middle school, one of her best friend’s step-fathers worked in the Maintenance Department at Flamboro Downs. “When he saw how much I loved horses, he would take us to the track. This left no doubt in my mind as to where I wanted to work when my mother told me to get a job the summer I was 14 years old. My friend’s step-father hung an ad at the stable gate for me, and a few weeks later I had my first job as a groom working for Sandra Houghton and Lance Hall.”

Following that Michelle also worked for various trainers during the mid to late 90s and in the early 2000s, and in the late 90s she was caretaker and Assistant Farm Manager for Obeyd Ranch.

Her most rewarding experience as a caretaker was looking after a broodmare and being there to witness the birth of her foal. “Then caring for the foal, helping introduce the harness, taking part in the training, and ultimately being there when they step onto the track for their first race. As they step out under the lights, their whole life up to that point flashes before your eyes.”

On the flip side, Michelle found racing horses she cared for in claiming races very challenging and stressful. “I, like all grooms, get very attached. They are my family, my babies, so to lose them so abruptly, even though you always know it’s a possibility, is very hard.”

Unfortunately she experienced this first hand. When Michelle first started working for Sandra Houghton, Shepherd Home, a grey horse, caught her attention. “He obviously caught my eye from the start and was the name that went on my first groom’s application. We bonded quickly and I was devastated when he was claimed. Lance (Hall) even tried to buy him back in the paddock that night. I was allowed to visit and did. His new trainer said he was a different horse when I walked in the barn to see him and that she had never seen a horse love someone so much. Of course, he was claimed again and we lost touch. A year later I was called to the barn to “pick up my pay” and they asked me to water the horses before I came in the house...Shep was in the barn. After a time, I was laid off, and Shep was sold. He just disappeared.”

A few years later Michelle decided to track Shep down (now that the internet was more mainstream). She was successful and a few months after making contact with his owners in the US, she and Shep were reunited and Shep was with Michelle the rest of his life. 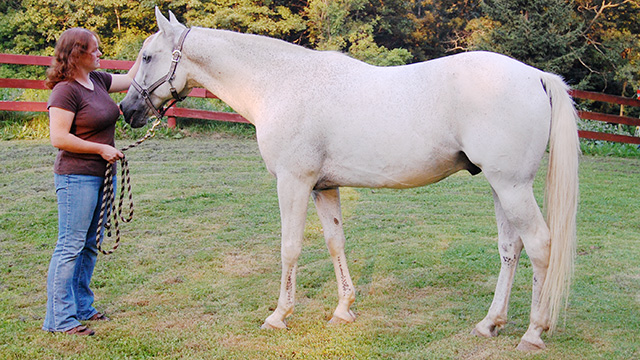 Her greatest accomplishment as an artist was becoming a juried American Academy of Equine Art (AAEA) member and most recently she received her first award from the AAEA - an Award of Merit for “Shady Daisy Shadow Roll”. It is most unusual to see standardbred art hanging in an AAEA show, so to see my racing art not only be accepted, but awarded, is something I am thrilled with. I have worked so hard to get here.”

For Michelle, who is now a mother to two-year-old twins, Owen and Autumn, her connection to harness racing is now through her art. Hanover, her closest track, is over an hour drive from her home. In the meantime, she promotes harness racing and advocates for Standardbred retirement/aftercare and groom recognition. She adopted Conrad Seelster, who spent the latter part of his career as an ambassador with the Ontario Harness Horse Association’s Hands On Horses program.

“I am so incredibly happy to see grooms being recognized and celebrated across the country, and I hope that it extends to everyone -- on and off track. Racing, training, breeding...they all work so hard for these horses. This ball needs to keep rolling. I do hope this becomes an annual event.”

What a great job you have

What a great job you have done recognizing the hard work theses Grooms do for their trainers and owners, 7 days a week and there are not too many that complain. Being in the horse business for over 40 years, I know what they go through. My hat comes off to you Michelle, working all these years to see that the GROOM be recognized for their hard work. It's not only the trainer and the driver that should get all the credit, let's give a whole lot to the GROOM.