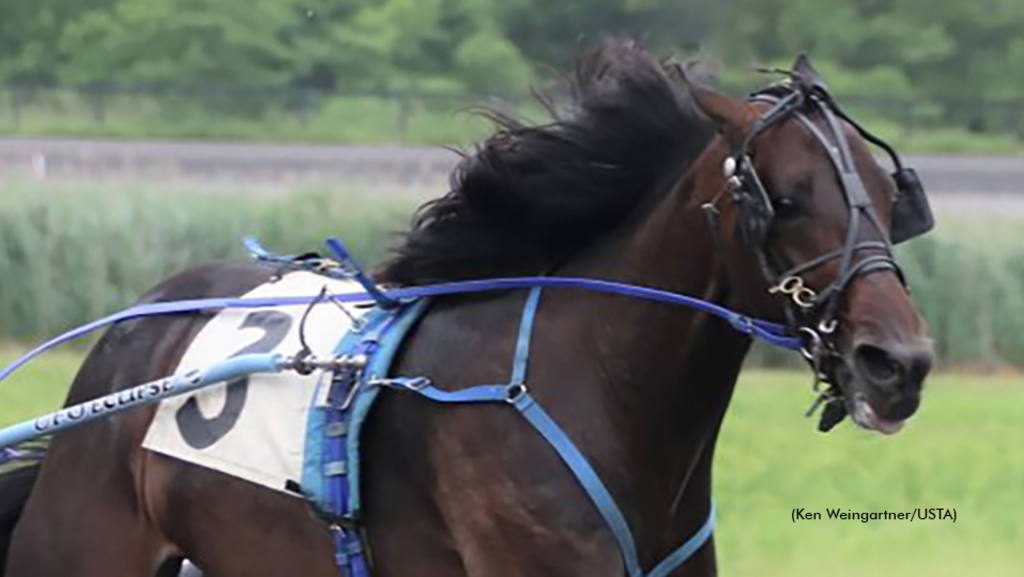 Claude Huckabone III picked up two wins in Monday’s final round of qualifiers for two-year-olds at Gaitway Farm, but the trainer’s focus is never on being first with his horses at this stage of their careers.

“We’re just looking for an education,” said Huckabone. “I could care less how fast they go as long as they do it right and they learn from it. The main thing is to give them a good experience so when they go to race there’s not much anxiety.

“It’s not going to be a finished product right from jump street, they have to learn how to do their job from every angle. I want to see good manners and I like them finishing through the wire. If you’re good enough to beat someone by passing, that’s great.”

Huckabone, who last November moved his base from upstate New York to Gaitway Farm in central New Jersey, saw male trotters Nicholas Blue Chip and Heart Of A Titan get victories Monday. Both were driven by Jordan Stratton for owner James Crawford IV.

Heart Of A Titan (E L Titan-Hip To My Heart) won in 2:01.4 just as rain began to fall over the training center’s one-mile oval. The colt was bred by Steve Jones and Fair Winds Farm, and sold under the name Pedal To The Metal for $14,000 at the Goshen Yearling Sale. He is a half-brother to Chapheart, who won last month in the New York Sire Stakes series.

Nicholas Blue Chip (Chapter Seven-Chasin Clouds Away) won in 2:02 despite making a break early in the mile. He was bred by Blue Chip Farms, Jordan Farkas and Jeffrey Rabinowitz, and sold for $50,000 at the Lexington Selected Sale. His family includes O’Brien Award winners Habitat and On A Streak.

Huckabone also drove one of the morning’s fleetest finishers, male pacer Upallnightbluechip, who debuted in 1:57 in finishing second and covered his final quarter-mile in :27.4. Only one two-year-old came home quicker.

The 48-year-old Huckabone has a stable of 30 horses, with 17 being two-year-olds.

“I’ve always loved the horse; since I was in the second grade I knew what I wanted to do,” said Huckabone. “I like training horses and watching them develop. It’s fun for me. Doing babies is awesome because it’s like watching your kids grow up. You get to watch them become grownups. You just have to teach them appropriately.”

Huckabone is not afraid to make changes between starts with his horses.

“You’re constantly trying to evolve to a better place,” he said. “If you’re trying to get to a better place, you’re not going to keep doing the same thing and hope to get better. They will develop and improve just on their own, but you have to make the appropriate changes and the appropriate times in order to keep them going in the right direction.”

Huckabone started driving in amateur races at the age of 15 and has won 2,507 races as a driver and 810 as a trainer.

“I’ve been very lucky to have the support that I’ve had,” said Huckabone. “I’ve had a strong backing the whole time. And very lucky coming across the right owners too. I couldn’t ask for better owners. They’re good owners, and they’re even better people. Everybody is rooting for everybody. When somebody wins, everybody else is on the bandwagon sending congratulations. Everybody is on board, we’re like one big team. It’s the greatest thing in the world.”

Zanatta posted the fastest mile, stopping the clock in 1:53.4 with driver Joe Bongiorno. She was two-for-two in qualifiers at Gaitway, having won in 1:56.1 on June 13.

The fastest last quarter belonged to Gaitway Guy, who came home in :27.1 to cap a 1:58.3 mile with driver Steve Smith.

The First Mile, presented by onGait and produced by 412 Communications, provided coverage of the qualifiers live from Gaitway Farm with harness racing media veteran and series producer James Witherite serving as lead commentator. Replays are available below.