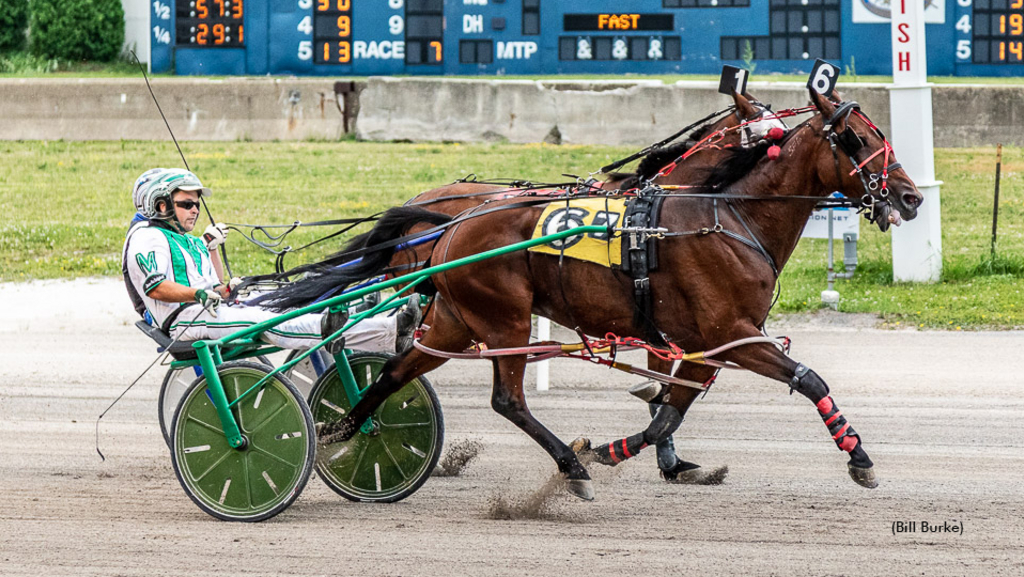 A change of venue seems have agreed with Just Plain Loco ($3.70) as he notched his second straight victory in as many starts since arriving from Yonkers Raceway with a solid length win over Stop Action in Buffalo Raceway's $16,500 Open Pace on Sunday afternoon (June 26).

After a convincing four-length score in his Buffalo Raceway debut in the Open on June 11, Just Plain Loco showed it wasn't a fluke as he rallied from last place to first this time around.

Stop Action (Kevin Cummings) got the lead early and set strong splits of :29.1, :57.3 and 1:26 over the fast track. But Just Plain Loco, who was sixth and last in the early going, was on the move on the outside approaching the three-quarter marker. He then powered his way past Stop Action midway down the stretch to get the nod. The winning time was 1:54.3. Out On Bail (Jim Morrill Jr.) was third.

Owned by Paul Lang and conditioned by Jennifer Giuliani, the six-year-old Just Plain Loco (Well Said-Symphony In Motion) earned his third win in 16 starts on the season. The victory increased his bankroll to $48,695 this year and $335,270 in his career.

Yankee On The Move ($6.30) continues to move in the right direction after scoring his third consecutive victory with an impressive five-length win over My Money Honey in the sub-featured $14,400 Open II Pace.

Moving up the condition ladder successfully for the third straight start, Yankee On The Move found the tougher test a non-factor as he posted a seasonal best time of 1:54.3.

Ashleysbest and Weekend Atnannies had a wicked speed duel to the top and that took the starch out of them up later in the race. Yankee On The Move, sitting in third, started his first-over grind approaching the half-mile marker and was in total control with a panel to pace. With things well in command, Yankee On The Move cruised home the easiest of winners while My Money Honey (Kyle Cummings) took second and Tullow N (David McNeight III) was third.

Owned by William Emmons and trained by James Clouser Jr., the five-year-old gelded Yankee On The Move (Yankee Skyscrapper-Fox Valley Raquel) notched his seventh victory in 22 starts this year. The win moved his 2022 earnings to $39,246 and lifetime bankroll to $108,930.

“It’s a big milestone and it felt good to get there. Especially while racing exclusively in western New York my whole career where the purses were pretty small for a long time,” said Cummings. “I learned the business from my father, John Cummings, and if it weren’t for him, I would have never have been able to achieve this.”

When the dust settled on Sunday, Cummings won three races and finished second in two more.

Cummings first started in the business grooming for his father -- who was a longtime trainer and driver -- while in school and eventually started driving at age 18. After taking a few years to get established, Cummings' career really started to take off as a catch driver in 2000 and, from there, never looked back. He became one of the best in western New York, winning multiple dash titles over the years. From 2009 to 2018, Cummings annual earnings topped $1 million each year and just missed that mark again in 2021. His single best year was 2015 when he bankrolled $1,784,657 on the strength of 337 driving wins.

Cummings has spent his entire 34-year career in western New York and has excelled in both overnights and New York Sire Stakes competition during that time, earning him the respect of everyone he has competed against.

Racing will resume on Wednesday afternoon at 1:30 p.m. with a 10-race card set. The New York Sire Stakes continues its tour with a pair of $53,000 events set for the two-year-old colt and gelding trotters. There will also be a $15,000 Excelsior A race for the gentlemen along with a $6,300 Excelsior B battle.