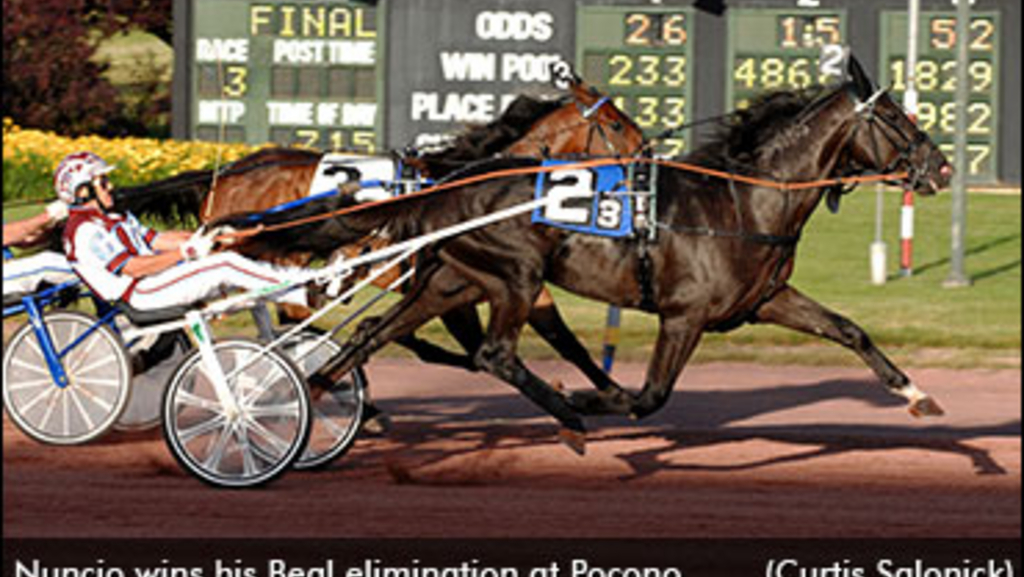 “He just got so aggressive and so wound up at the end of last year that you just couldn’t rate him at all. That was to his detriment in a couple races and it cost him winning."

Nuncio spent a lot of this past winter learning to use his natural talent in a more productive way, and it shows.

The three-year-old trotter, who is 3-1 from post two in Saturday’s $500,000 Earl Beal Jr. Memorial at Mohegan Sun at Pocono Downs is undefeated in four starts in 2014 after a barn change following his two-year-old season.

New trainer Jimmy Takter concentrated on teaching the son of Andover Hall to conserve and use his speed judiciously and driver John Campbell said he’s passing the course so far.

Last year, Nuncio led at the half-mile point in eight of his 10 races. This year, he’s been no better than third at the halfway point of any race and not seen the lead until the stretch.

“I’m very happy with the way he’s been coming along,” Campbell said. "Jimmy trained him from behind all winter and we’ve qualified him that way and raced him that way and he’s started to figure it out, so I can be a little more aggressive with him at the gate.

“He left a little bit last week and didn’t get wound up. I’m very happy with his manners so far. He’s been very relaxed and that’s important because if they’re worked up and you’re fighting with them, you just take away energy. He’s always been able to go; speed hasn’t been an issue ever with him. It’s more been just manageability.”

Nuncio won his Beal elimination last weekend by a half-length over Datsyuk in 1:52.2. His previous three wins this season all came in divisions of the Pennsylvania Sire Stakes.

Last year, he won five of 10 races and never finished worse than second on his way to $461,074. His earnings were third most among two-year-old trotters, behind Takter-trained colt Father Patrick and Takter-trained filly Shake It Cerry.

Four of Nuncio’s second-place efforts were against Father Patrick, in the eliminations and final of the Peter Haughton Memorial and elims and final of the Breeders Crown. Nuncio won the Matron Stakes and a division of the Reynolds; he also was runner-up to Muscle Network in the Valley Victory.

Father Patrick, who received the 2013 Dan Patch Award for best two-year-old male trotter, also won his Beal elimination last week. He drew post No. 8 for the final and is the 5-2 morning line favourite with driver Yannick Gingras.

“I’d certainly rather have the two hole than outside, that is for sure, but once we get in to the race, everybody will know at the quarter whether it’s good or bad,” Campbell said. “But going in to the race, I’d rather be down inside.”

Last year, Father Patrick won 10 of 11 races, including the Breeders Crown at Pocono Downs, the Wellwood Memorial and the Peter Haughton Memorial. His only setback came against Nuncio in July.

“This is the first time all year that he’ll be asked to go,” Gingras said. “He’s more than ready after four easy starts.”

Post time is 6:30 p.m. for the first race. The Sun Invitational is race No. 8 and will be followed by the four stakes.