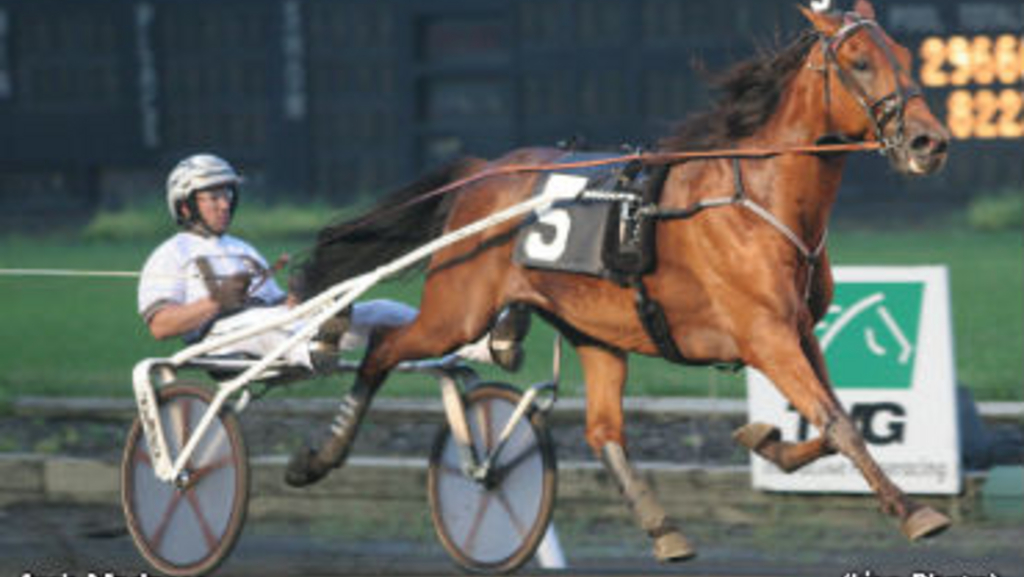 A powerful line-up went postward at the Meadowlands Racetrack on Friday evening as the New Jersey oval hosted a $40,000 prep for this year’s Titan Cup, the $40,000 final of The Magician and a pair of $25,000 divisions of the New Jersey Sires Stakes

Arch Madness, who was making his first start on U.S. soil since his trip overseas to compete in this year’s Oslo Grand Prix and Elitlopp, cruised to a gate-to-wire victory in 1:51.3 in the Titan Cup prep for the duo of driver Brian Sears and trainer Trond Smedshammer. Sears hustled the seven-year-old son of Balanced Image-Armbro Archer to immediate command from Post 6 and never looked back after zipping through fractions of :28, :56.3 and 1:25. His final quarter of :26.3 was more than enough to fend off the late-closing Slave Dream and third-place finisher, Buck I St Pat.

“It’s hard to say how he was going to come back, especially after the long travels,” said Sears. “The way he raced tonight was super. He’s never been better really, and so I was very pleased to see that. He’s definitely on top of his game right now and I’m really happy to see him come back as good as he did. Hopefully he’s just as sharp next week [for the final]. It’s nice to have him around to race year in and year out. He’s been quite a horse for me.”

The gelding, who is now a six-time winner from seven starts this season, bumped his lifetime earnings to $2,820,571 with the win. The 25-time winner is owned by Marc Goldberg of Farmingdale and Willow Pond LLC of Hewlett, NY.

Wind And A Prayer was treated to a perfect, pocket trip by driver Ron Pierce in the $40,000 final of The Magician, and three-year-old son of Like A Prayer-Miss Checkmate didn’t let it go to waste en route to pulling off a 27-1 upset. The Evictor shot to the front and supplied the square gaiters with very sensisble fractions of :28.3, :58.4 and 1:28, but he was out-sprinted in the lane by Wind And A Prayer, who stopped the teletimer in 1:56.1. The Evictor held on bravely to finish second, with third prize going to Celebrity Bombay.

Andrew Byler trains the colt for owner Roy Dobbins of Bryant, AL, and together they’ve watched the youngster assemble a 2-1-1 record this season from just six trips to the track. The lion’s share of the purse boosted his overall cash stash to $32,098.

Krispy Apple, fresh off her runner-up performance in the Fan Hanover Stakes, cruised to an easy win the opening split for the tandem of driver Tim Tetrick and trainer Mark Kesmodel. The daughter of Western Ideal-Apple Krisp slid into an early three-hole while Honky Tonk Woman rolled the field to the quarter pole in :27.4. Tetrick hit the accelerator on the way to the mid-way point with Krispy Apple, and she cleared easily and proceeded to throw down middle panels of :56 and 1:23.3. She was under wraps through the lane and won comfortably over Honky Tonk Woman in 1:50.2. Rockratese rounded out the top three finishers.

With the win, Krispy Apple improved her 2011 record to 6-1-0 in seven starts for Kesmodel and partners Jeffrey Bamond and Joseph Davino. The high profile pacing filly has now banked $357,700 to date.

Pretty Katherine was sent off as the 1-2 favourite in the second division, and the daughter of Rocknroll Hanover-Fox Valley Shaker didn’t disappoint for the team of driver David Miller and trainer Casie Coleman. Miller got away third with his charge while Mystical Diva sped to the top from Post 8 and threw down a :27.4 opener. Miller hit the gas pedal in the backstretch, however, and in a matter of strides Pretty Katherine was on the point. She led through middle panels of :55 and 1:23 before kicking home in :27.4 en route to the 1:50.4 score. Rocklamation was next best, with Myluvmylife grabbing the show dough.

John Liviakis of Mill Valley, CA holds the papers on Pretty Katherine, who won for the first time this season after going 5-for-7 last season. She has now stashed away $421,898 in lifetime earnings.

(With quotes from Meadowlands Racetrack)