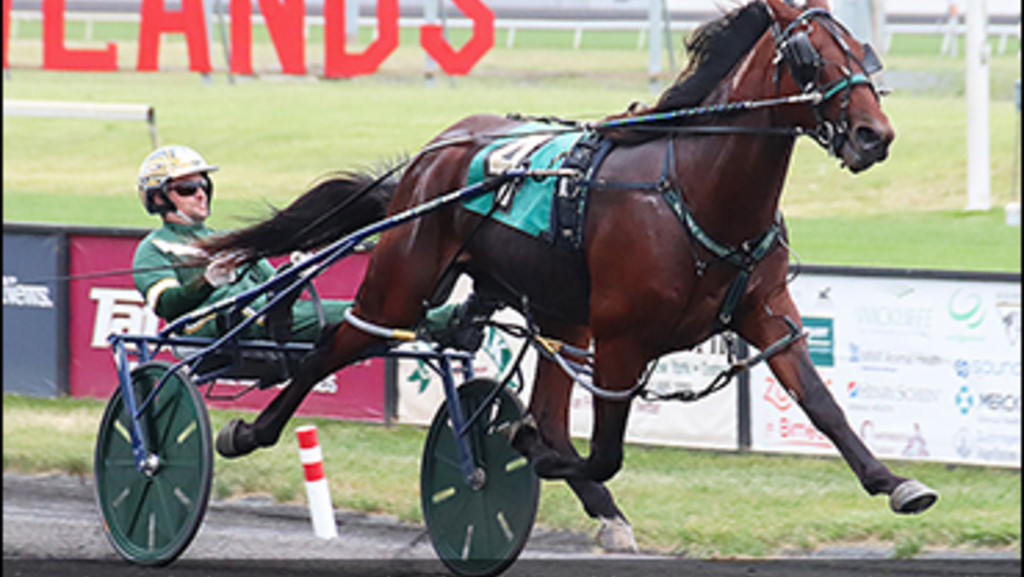 Tony Alagna brought six sons from the first crop of his champion pacer Captaintreacherous in to race this morning and opened the colt paces with a one-two finish in the 11th. Odds On Boca Raton (Scott Zeron) sat tight behind the pace and then edged by stablemate Shipshape (Brett Miller) in 1:54.4. Shipshape went easily through the 1:27.4 three-quarters with Zeron tipping his charge out for the drive and getting by the leader with minimal encouragement. The winner is owned by Dana Parham’s Odds On Racing, who paid $105,000 for him at the Lexington sale. Steve Stewart and Conquest Acres are the breeders.

US Captain (Yannick Gingras) made the team two-for-two when he edged by a game Bombay Hanover (Zeron) through a :26.4 on-the-board end to a mile in 1:55. This precocious Captaintreacherous colt is from world champion American Jewel and brought a winning bid of $180,000 from Myron Bell on behalf of breeder Brittany Farms, Brad Grant, Joe Barbera and US Captain Racing.

Captain Ahab (Gingras) completed the perfect day with a 1:54.4-:27.2 clocking with something left. He set all the pace, was left with a big lead when the pocket-sitter broke at head-stretch, then held sway over a late charging Duddies Lor for the win. Captain Ahab is another Brittany-bred, with the farm remaining a component of the partnership with Brad Grant, Vinnie Barbera and Captain Ahab Racing that gave $100,000 for him in Lexington.

Trotting fillies opened the card, and The Ice Dutchess began her promising career with a 1:56.4 winning effort for trainer-driver Jimmy Takter. Takter put her on the lead from the word go, with Personal Paradise (Åke Svanstedt) tracking her every move from the pocket through sociable fractions. When they straightened up, Takter hit the gas pedal and The Ice Dutchess responded with a 27.3 final quarter. The Ice Dutchess was a $320,000 Harrisburg buy for Coyote Wind Farms. The Muscle Hill filly was bred by Stephen and David Dey.

Speed Titan won the second race for Brian Sears in a forwardly-placed 1:59.1. Taking over on the backstretch on the way to a 1:00 half, Speed Titan sailed home in :27.4 to win by nearly 10 lengths over Taja Mahalla (Brian Connor). The winner is trained by Marcus Melander for Rick T. Wahlstedt, who paid $70,000 for the EL Titan filly in Lexington. The breeder is Kjell Magne Andersen.

Trond Smedshammer won the third with the Explosive Matter filly Matterlei in 2:00.4. After leaving to the top, Trond released Ms Masterpiece and followed that rival through a 1:01.1 middle half before tipping Matterlei to the outside off the last turn for a :28.3 sprint home. Mimispearloflindy (Tim Tetrick) closed a bit to be second. The Purple Haze Stable paid a mere $14,000 for Matterlei at Harrisburg last fall; Shanamphilankilou is the breeder.

Trotting colts came around in the fourth, where Gerry converted a perfect Tetrick drive into a 1:58.2-:27.1 win. The pair tracked Battenberg (David Miller) through easy numbers, then jetted by that rival through the fast final quarter while well in hand. Lennart Agren as SRF Stable gave $225,000 for the Muscle Hill colt at the Lexington Selected sale; KG Bertmark Hingstdepa is the breeder.

Melander sent out another winner in the Muscle Hill colt Demon On The Hill (Sears). The path to victory was the tried and true go to the front, rate and sprint, with a :28 flat end to the 1:58 record over a very handy Osterc (Yannick Gingras). Vicky Trotting Inc. owns the winner, a $125,000 Harrisburg yearling bred by Walnridge Farm and Meirs.

Galixton won at first asking for Svanstedt in 1:58.2, closing into a :29.4 final quarter to get by Lucius Vorenus (David Miller). He is from Trixton’s first crop and was an $87,000 Lexington yearling buy for Little E LLC, Hans Enggren and Joe Sbrocco from breeder Brittany Farms. The race was marred by The Chutzpah Kid falling at the half; happily, both The Chutzpah Kid and driver Brian Connor got up and walked off.

Uncle Peter had a 2:00 winner from his first crop in Super Schissel, another Takter pupil. A pocket ride behind Consus Victory was the route to success, as Takter tipped his charge out in the stretch and closed in :28 and change for the score over Captain Krupnik (Svanstedt). The Ohio-bred winner was sold at the Lexington sale for $115,000 to Al Libfeld and Perry Soderberg and consigned by Coyote Wind Farms.

As Time Goes By (Andy Miller) won the first of the pacing races, as the Captinatreacherous lass sat the pocket to Cash Reward (Gingras) before sprinting by that rival with a :26.2 end to the 1:56.4 mile. The winner was bought by Willow Oak Ranch and Andy Miller for $120,000 in Lexington from breeders Steve Stewart and Birch Hollow Farms.

Joe Holloway has another top filly prospect in Zero Tolerance, a Heston Blue Chip $30,000 Lexington bargain that won impressively again, this time in 1:54.2-:26.3 while in hand to David Miller. She set friendly fractions, fought off a hard rush from Hurrikane Norakane around the final bend, then kept Izzy Hanover (Scott Zeron) and Treacherous Reign (Bret Miller) at bay late. Zero Tolerance is a Winbak-bred, owned by Val D’Or Farms and Ted Gewertz.

David Miller came back to win with Mi Nina Bonita next, cutting the mile and holding off Odds On Clearwater (Zeron) and Michelons Filly (Marcus Miller) through a :28.1 end to the 1:56.4 mile. Robbie Siegelman trains the $7,000 Harrisburg bargain for himself, Horowitz and Vasquez; Barry Rubenstein Farms bred her.

Several colts with Hambletonian aspirations were in qualifiers today, and the enigmatic Tactical Landing made a large stride in that direction for Takter with a 1:53.1 win over another legitimate prospect in Mets Hall (Andy Miller). Celebrity Express (Dewayne Minor) went along quickly on the lead, and it was mid-stretch before the pair of sophomore colts reached him, trotting official :27 final quarters to get by that rival with Tactical Landing holding off Mets Hall close by just over a length while in hand.

Tae Kwon Deo made his first start Stateside for Takter a winning one with an easy 1:57 effort. He comes with strong credentials from Lufti Kolgjini’s stable in Sweden and was the winner of the Swedish Breeders Crown. The Muscle Hill colt was sent to Takter with the Hambletonian targeted.

Live racing resumes at The Meadowlands tonight at 7:15 p.m. with The Summer Wine Festival on the bill alongside an 11-race card.