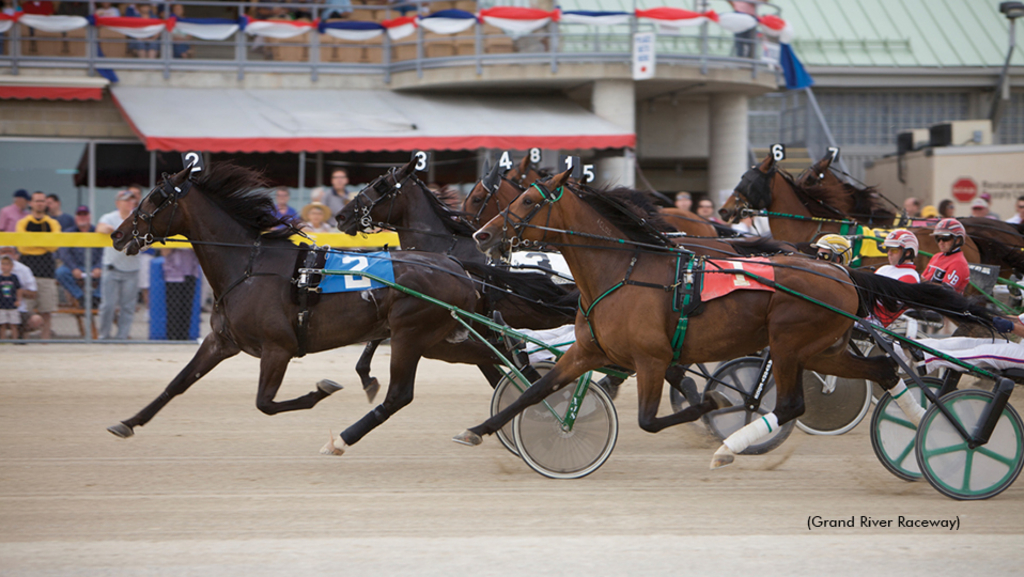 A pair of $8,800 trotting events served as the top contests on the Wednesday (June 22) card at Grand River Raceway, with Unpolished and All Muscle N Sass taking home the winner's share.

Unpolished pushed to a three-length lead to a :28.3 first quarter in rein to J Harris and cruised under minimal threat through race's midsection, cutting a clip of :59 and 1:28.2. The main challenge for the four-year-old Musclesprinctonian mare came off the corner when pocket-sitter Thomas P Two attempted to deliver a 2-5 promise, but was turned away by a neck at the end of a 1:58.3 mile. Headline Maker gave chase in third, another six lengths behind.

R. Joseph Squires trains and co-owns Unpolished with Crazy Parrot Farm LLC. He won his fourth race from 10 starts this season and his ninth from 31 overall while pushing his account to $45,015. He paid $8.90 to win.

Team Cullen implemented similar tactics to take the other feature division with All Muscle N Sass in 1:58.2. Travis Cullen protected the pylons with the four-year-old Muscle Mass mare and led uncontested through fractions of :28.4, :59 and 1:28 before cruising to a 2-1/2-length victory over Field Gunner, who persisted through a mid-field first-over grind to take second. Rose Run Why Not tracked his cover to take third.

All Muscle N Sass races for owner A1stable and trainer Jodie Cullen. She won her second race from 18 starts this season and her sixth from 45 overall, good for $98,757 in earnings. She paid $4.50 to win.