The Golden Child Ready To Shine?

2012 was a year of highs and lows in the harness racing world. For trainer Mark Etsell’s star sophomore colt, the racing season followed the same pattern of peaks and valleys. From visions of Ontario Sires Stakes and Dream of Glory trophies to injuries and poor racing luck, The Golden Child endured a lot of hardships, but also showed glimpses of the horse he could be.

One of the brightest moments of 2012 for the son of Striking Sahbra came on July 12 at Hanover Raceway. On that day, against a field of conditioned foes, the sophomore star showed his ability in a commanding victory. The Golden Child trotted ahead of the field for the duration of the race, and when all was said and done he had notched a seven-length, track-record-equalling victory in 1:57.

After that race, The Golden Child resurfaced on July 28 in an elimination for the $100,000 Dream of Glory Trot. He recorded another open-length win in his elim, as he trotted his mile in 1:57.1 against some of the top OSS Grassroots performers. For the month of July, The Golden Child lived up to his name, and appeared to be a favourite to take Hanover Raceway’s top prize. 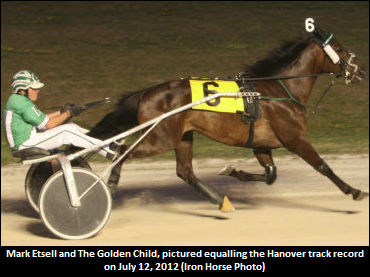 For Etsell, the next week was tough, as the gelding did not come out of his elimination in top form. Etsell was forced to scratch The Golden Child out of the race he wanted to win so badly. A foot injury would keep The Golden Child from competing in the Dream of Glory final, and keep Etsell from winning the biggest race at his former home track.

Now four, The Golden Child is set to return to the track where he is a co-holder of the track record, which he shares with millionaire trotter Abbey Road C. The Golden Child has recorded two wins from 13 starts this year, including a mark-lowering 1:56.4 victory at Kawartha Downs. His most recent win came in April at Woodbine Racetrack.

“That first start at Woodbine, Randy (driver Randy Waples) drove him and said the horse didn’t even know he was in a race," said owner Bob Newton. "He never had to use him. He’s just been racing tough down there. They’re going a bit too fast for him.”

In regard to the gelding’s health, Newton said that his charge is faring much better this year. “He’s injury free now,” Newton noted.

Etsell notes that the biggest problem this season seems to be finding a place to race him. “For the money he has made, the classes he hits at Mohawk go so fast. For the type of horse he is, it’s tough to find a place for him to race.”

Looking ahead to Saturday night’s start in Hanover, the trainer knows his horse has the ability to be a factor. When asked if another track record performance could be in store, Etsell said that’s up to his horse. “He has it in him. Whether it will happen tomorrow, we’ll see.”

In his last start, The Golden Child ran into some troubles in the early going and made a break, but a return to the inside of the racetrack should benefit him this time out.

“He’s a four-year old now, so he doesn’t need any excuses," said Newton. "But with the rail --- if he’s in the right mood --- he can leave from the gate. If he’s forwardly-placed, he should be good in there tomorrow night.”

The Golden Child will head to the gate for Race 9 on Hanover's Saturday evening program. The 10-race program will kick off with a 7:30 p.m. first-race post time.