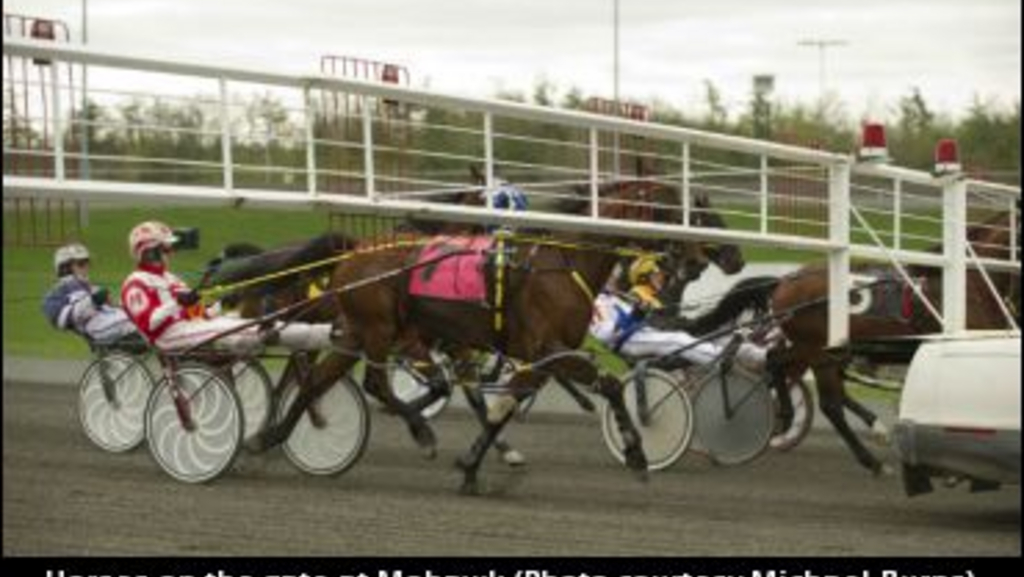 Two-year-old qualifying action flooded both the Meadowlands Racetrack and Mohawk Racetrack Friday morning, and both raceways hosted the sessions under perfect weather conditions.

‘Breakfast with the Babies’ at the Meadowlands Racetrack kicked off with an opening qualifier was for trotting fillies, and Livininthefastlane (Donato Hanover - Nicoles Promise) won for driver Yannick Gingras in 1:58. She finished off her mile with a :27.2 final quarter and was well in hand over Saturday Mornings after having sat the pocket. Livininthefastlane was an $80,000 yearling purchase by Marvin Katz, Al Libfeld and Sam Goldband at Harrisburg and is trained by the Julie Miller stable.

In the second race, the Julie Miller-trained and driven Kelseys Keepsake won in 2:00. The Yankee Glide filly out of Distaff led all the way and dug in gamely for the win over True Blue Stride in a :28.3 final quarter. She is owned by the Andy Miller Stable and Peggy Hood, who had the final bid of $35,000 at the Lexington Selected Yearling Sale.

Taxed To The Max completed the early Pick 3 for Julie’s stable when the Yankee Glide colt won in 2:00.1. Yannick Gingras used the same strategy as he did in the first race: tracking place finisher Muscle Blues and going by late. This colt is from the accomplished broodmare Prime Mistress and cost Andy Miller, Arden Homestead and Steve Demeter $92,000 at Lexington last fall.

Pacers began in race four and the sharp-looking filly Cashaway (Western Ideal - CPA) won impressively with Tim Tetrick aboard in 1:55.4 (home in 27.3). She was a $105,000 yearling sold at the Lexington sale and is trained by Tony Alagna for Brittany Farms and Marvin Katz. Ideal Nuggets and Sawyer followed her under the wire.

Next up was an impressive mile from The Show Returns, Richard and Joanne Young’s $180,000 Lexington sister to their champion mare Put On A Show. Tim Tetrick sent the Rocknroll Hanover - Steinams Place lass to the top from Post 6 by the half in a minute then turned on the jets covering the final half in :56.1 (last quarter in :27.3) going right to the wire with the colt Badiou Hanover and late-rushing filly Bettor Be Steppin.

Bruces Magic won the last of the two-year-old races wire to wire in 1:55.4 with Yannick Gingras aboard for Tony Alagna. He is a Rocknroll Hanover colt from Special Magic that Alagna Racing, Joe Sbrocco, Eagles Soar Partners and Louis Willinger paid $65,000 for at the Lexington sale. Touch Of Luck closed up nicely for the place and Artspeak rallied from well back for third.

An imposing group of trotters lined up for Race 7 with both last year’s Hambletonian winner (Royalty For Life) and Breeders Crown winner (Spider Blue Chip) sharpening up for the $400,00 Hambletonian Maturity on July 5. Those two traded leads through honest fractions, but deep in the stretch the mare Mistery Woman went by both to win in 1:53.2 for John Campbell. Her record this season has been spotty, but today she looked like she’s ready for anything. Jonas Czernyson trains for Millstream Stable and Aldebaran Park, Inc.

Maven came back from Sweden in good form and took a spin around the oval in 1:53.2 willingly holding off Your So Vain with a :28.1 closer for Yannick Gingras. Jonas and owner Bill Donovan have a lot to look forward to this summer with their champion mare, as that division is deep with talented ladies. They will make for interesting races throughout the season.

Qualifiers were delayed slightly when driver Brian Sears showed up at qualifiers to drive the horses he was named on. It was announced on Thursday that Jeff Gural had banned Sears from driving in anything but stakes races at the Meadowlands, Tioga and Vernon.

Officials from the Meadowlands asked Sears to leave, which he did.

Ten qualifying races for two-year-olds were the main attraction Friday morning at Mohawk Racetrack, as the Campbellville, Ont. played host to the anticipated session under pristine conditions.

The two-year-old qualifiers were preceded by four qualifying races for horses aged three years old and up. Three-year-old Angus Hall fillyJoyous Hall won Race 1 by a half length for trainer Bernie Bahr and driver Dave Boughton. Race 2 was won by four-year-old His Highness mare Coverlet, who won by a whopping 18 lengths in 1:56.2 for trainer Pat Shepherd and driver James MacDonald. Three-year-old Somebeachsomewhere gelding Weather Hanover recorded a two and a half-length victory in 1:54.4 during Race 3 for trainer Mark Austin and driver Chris Christoforou. Four-year-old Mach Three gelding Buckeroo paced to a four and a half-length victory in 1:55 in Race 4 for trainer Ron Kerr and driver Mike Saftic.

The two-year-old qualifying races got underway afterward and comprised Race 5 through Race 15. Brief recaps of each of the races appear below

Race 5
Bin N Heaven (Rock N Roll Heaven-Binions-Bettors Delight)
Trainer – Tony O’Sullivan
Driver – Tony O’Sullivan
• Bay filly Bin N Heaven, a $75,000 yearling purchase, started from Post 6, came three-wide off the final turn and fought her way to a one and a half-length victory in 2:00.1. The filly closed with a :27.2 final quarter for owner Frank Bellino of Bronxville, NY. She is the second foal out of Binions, who won 27 races and banked over $584,000 in her racing career.

Race 6
Rustic Rosie (Muscle Mass-Rose De Vie Stena-Balanced Image)
Trainer – Rick Zeron
Driver – Rick Zeron
• Rustic Rosie, a bay filly, was forwardly-placed off the gate by Zeron and eventually got up for a one-length victory in 2:01.4 off a :28.4 final quarter. The $50,000 yearling purchase is a full sister to O’Brien Award winner Riveting Rosie and is owned by Rick Zeron Stables, James Walker, Ecuries Daniel Plouffe Inc. and Howard Taylor.

Race 7
Sheeztoughenough (Art Major-Sheezadiamondealer-Cams Card Shark)
Trainer – Dave Menary
Driver – James MacDonald
• After having started from Post 4, the bay filly got away fifth and was charted overland in fifth at the half and overland in third at the three-quarters pole. The $6,000 yearling buy was a half length in arrears at the head of the lane and paced on for a three-quarter-length win in 2:00.2 off a :27.3 final quarter. Sheeztoughenough is the first foal out of Sheezadiamondealer and is owned by Menary Racing Inc., Brad Gray and Michael Guerriero.

Race 8
Bystander (Taurus Dream-September Hanover-Donerail)
Trainer – Herb Holland
Driver – Rick Zeron
• The bay colt started from Post 2 and sat third through the opening half mile. He was in second, trailing by six lengths at the three-quarter-mile station, before he started to gobble up some real estate in the final quarter. The $7,000 yearling purchase reeled in the leader and trotted off to a two and three-quarter-length victory in 2:04.1 off a :28.4 final quarter. Bystander is owned by Herb Holland, Kostas Diakoloukas and Corrine Ryan.

Race 9
Sports Chic (Sportswriter-Vesta Blue Chip-On The Road Again)
Trainer – Blake MacIntosh
Driver – Chris Christoforou
• The bay filly started from Post 6 and recorded a wire-to-wire victory by three quarters of one length in 1:56.4. She came home with a 28-second final quarter. Sports Chic, who was a $35,000 yearling purchase, is owned by the Hutt Racing Stable and Blake MacIntosh. Her dam, Vesta Blue Chip, also produced the great Rainbow Blue as well as Westward Vision.

Race 10
Striking Ivy (Striking Sahbra-Pretty Muscles-Muscles Yankee)
Trainer – Gregg McNair
Driver – Doug McNair
• Striking Ivy, a brown filly, started from Post 6 and sat third through the fractions (:30.4, 1:04, 1:34). The homebred of Bloomingwood Farms Ltd. erased a six-length disadvantage in the final quarter (:28.1) and went on to record a quarter-length victory in 2:03.2. Striking Ivy is out of the mare that produced $268,000 winner Krakatoa and $118,000 winner Pretty Kadabra.

Race 11
Ditcherquicknhide (Windsong Espoir-Keystone Betty-Windsongs Legacy)
Trainer – John Kopas
Driver – Jack Moiseyev
• Ditcherquicknhide, a bay filly, left from the rail, sat third at the opening quarter (:30) and was second through the middle fractions (1:03, 1:35). She was up on the lead at the head of the lane and recorded a one and a half-length victory in 2:04.2 off a 29-second final quarter. The filly is owned by her breeders (Old Aultsville Stable, Estate Of George F Hempt Trust, John Kopas Stables Ltd.). She is out of Keystone Betty, who produced $151,000 winner Miss Aultsville.

Race 12
Jayport All Muscle (Muscle Mass-Jayport Design-Balanced Image)
Trainer – Blake MacIntosh
Driver – Trevor Ritchie
• The bay colt left from the rail, cut all the fractions (:30.4, 1:03, 1:34.2) and hung on for a neck victory in 2:05.1 off a :30.4 final quarter. The $7,500 yearling purchase is owned by Blake MacIntosh and Brittany Kennedy. Jayport All Muscle is the sixth foal out of Jayport Design.

Race 13
JLs Too Hot Taj (Pilgrims Taj-Yoko Hanover-Donerail)
Trainer – Johnathan McKinnon
Driver – James MacDonald
• The bay filly was eased into the race from Post 1 and sat closer to the back through the opening half. She worked her way up to second at the three quarters pole and advanced in the stretch. The $6,000 yearling purchase got up for a head win in 2:01.4 off a :28.4 final quarter. The filly is owned by Ron Gilbert, James MacDonald and Johnathan McKinnon. She is the fifth foal out of Yoko Hanover.

Race 14
Platoon Seelster (Federal Flex-Personal Hanover-Yankee Glide)
Trainer – David Holliday
Driver – Ryan Holliday
• The bay colt started form the rail, sat a two-hole trip through the fractions (:31.1, 1:03, 1:32.3) and closed in :28.4 to record a two-length win in 2:01.3. Platoon Seelster is the fourth foal out of Personal Hanover. She was a $6,500 yearling purchase and is owned by Caroline Holliday and Dennis Hannath.

Race 15
Master The Past (Glidemaster-So Fine Kash-El Paso Kash)
Trainer – Mike Guitard
Driver – Randy Waples
• After leaving from Post 3, the bay colt was a gate-to-wire winner in 2:03. Mike Guitard owns the $15,000 yearling buy. Master The Past is the sixth foal out of So Fine Kash, who produced $212,000 winner Love Walked In.

(With files from the Meadowlands)