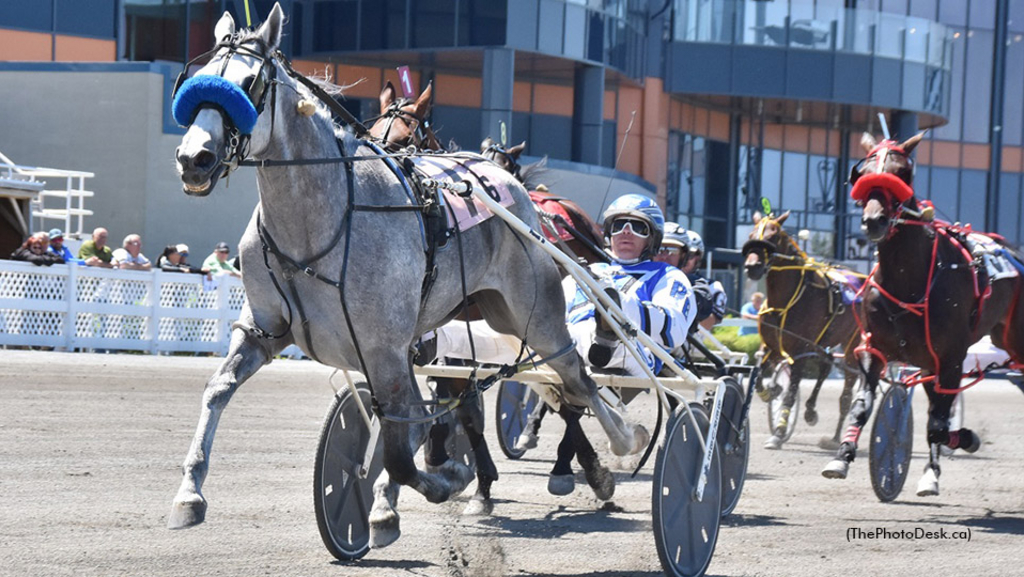 La Petite Grise and driver Pascal Berube avenged their loss last week to Platine Alpha, leading from start to finish in the $6,000 Preferred 2 & 3 Handicap Pace for mares on Sunday (June 19) at Hippodrome 3R.

In the sixth race, Fancy Girl and driver Francis Picard shot to the lead only to have to give way to the 1-5 race favourite, La Petite Grise and Berube, as they flew to the lead before the opening quarter-mile in an easy :29.1.

Off to the half-mile, La Petite Grise led the field in :58.4. Jimmy Gagnon came first-over with Platine Alpha but was not gaining on the race leaders as they sped to the three-quarters in 1:28.1.

Off the final turn, La Petite Grise and Berube pulled away in the stretch to win by 2-1/4 lengths in 1:57.2. Fancy Girl was second with Molly Kool and Stephane Brosseau third. Platine Alpha was fourth.

The win was the fourth in just seven starts this year for La Petite Grise. The four-year-old daughter of Sportswriter is trained by Fernand Jodoin, who co-owns with Michel Letendre. La Petite Grise paid $2.50 to win.

In the seventh race $7,000 Preferred 1 & 2 Handicap, the pacers were four-wide in the final turn with D Gs De Vito and driver Jonathan Lachance emerging victorious when the dust settled.

The race started off with an early slugfest as Spectrum Seelster and  Picard had the lead but Mickeymaksomespeed and driver Kiwon Waldron wanted to take it away. Picard refused and forced Waldron to back off and put Mickeymaksomespeed in the two-hole at the first quarter in :27.3.

Goldinthebadlands and Brosseau came first-over at the half-mile in :57.2, with D Gs De Vito and Lachance second-over as Spectrum Seelster continued to lead the field past the three-quarters in 1:27.3.

Then the action really began as Lachance came three-wide with D Gs De Vito and the race favourites, Siddhartha and Steeven Genois -- going for their third straight win -- were four-wide around the final turn.

All four horses were head-to-head starting down the stretch, but it was D Gs De Vito and Lachance who had enough left in the tank to pull ahead for a 1-1/4-length triumph in 1:57.4. Siddhartha was second with Histoire Enchantee finished third for Simon Delisle.

A six-year-old gelding by Sportswriter, D Gs De Vito notched his second win of the season from 10 starts for trainer Guylaine Fortin. D Gs De Vito was bred and is owned by Daniel Surprenant of Saint-Valentin, Que. He paid $10.70 to win as the 4-1 second choice.

Windsun Cheyenne continues to be the winningest horse at H3R this season. On Sunday, parked out first-over against pacesetter Outlaw Turn N Burn, Berube kept Windsun Cheyenne ($3.70) alive and then pulled away on the final turn to win in a five-length romp in 1:55.4. It was the fastest mile of the afternoon and marked Windsun Cheyenne's sixth win of the season (fifth at H3R). The 12-year-old son of Cams Card Shark is trained and owned by Gina Bragagnolo of Lavaltrie, Que.

Yannick Marquis celebrated his first training win as Titanium Alpha ($7) took the afternoon's opener with a 1:58 career-best effort on the front end. Marie-Claude Auger drove the sophomore Hes Watching-Ma Terre colt, a half-brother to Platine Alpha, for the 43-year-old Mascouche, Que. resident, who also co-owns with Maxim Gagnon and Joannie Paquette. Following a runner-up finish in the following race, Marquis has accumulated top three finishes in half of his dozen starts as a trainer.

(With files from Quebec Jockey Club)