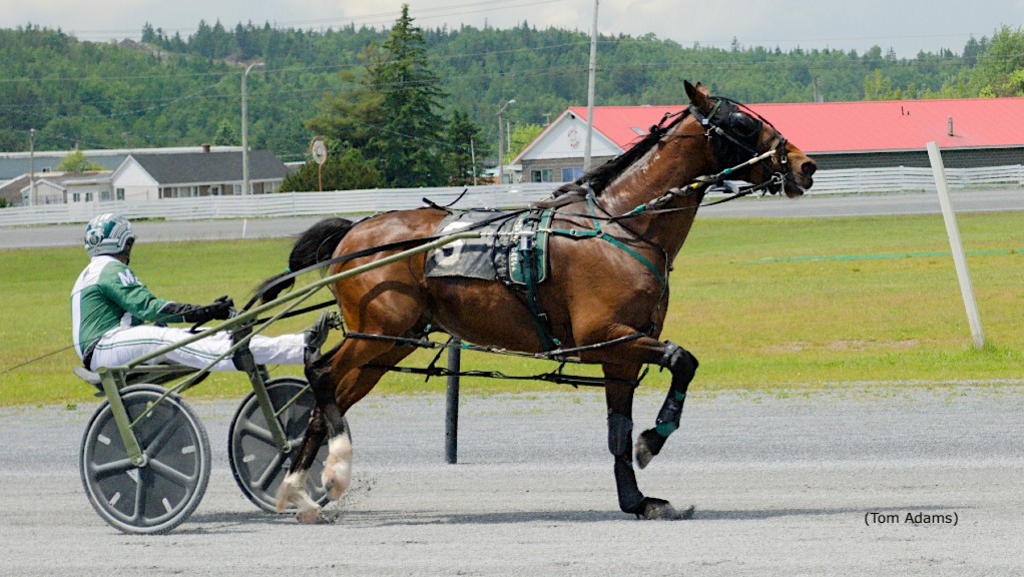 Time To Dance added another title to his impressive resume on Saturday (June 18).

The undisputed champion of the free-for-all ranks in the Maritimes last season captured the $6,000 Walter Dale Invitational Pace at Exhibition Park Raceway.

The 5-2 morning line favourite, Time To Dance left from Post 5 for driver-trainer Marc Campbell, but it was Bettim Again (Todd Trites) who bolted out to an early lead. He led stablemate American Risk (Mark Haig) and Time To Dance en route to a :27.2 first quarter.

Campbell made his move just before the midway point, going to the outside and pushing Time To Dance to the front by a nose over Bettim Again with a :57.3 half.

Time To Dance then held off late bids from American Risk and Batterup Hanover (Paul Langille) in the stretch to win by 2-3/4 lengths in 1:55.4.

A six-year-old son of A Rocknroll Dance, Time To Dance has won three of four races this year. Owned by Brent Campbell of Charlottetown, P.E.I., and Matthew McDonald of Edwards, Ont., the gelding has 35 career victories in 75 starts and lifetime earnings of $174,624.

Dont Ask Logan, with Trites holding the lines, went wire-to-wire to win a $2,500 Winners Over in 1:59.3, in front of Three Truths (Campbell) and Emperor (Jeff Lewis).

It was the third win in five starts this year for the seven-year-old son of McArdle. Owned by Andrea Rennison of Truro, N.S., Ian Macdonald of Lower Sackville, N.S., and Basil Sherry of Beaver Bank, N.S., and trained by George Rennison, Dont Ask Logan has 20 career wins and $82,008 in career earnings.

Where was Sock It Away?

Why wasn't Sock It Away entered in the race? He was unbeatable, the fastest horse in The Maritimes when Charlottetown took its annual winter hiatus in January and he won his most recent start. I think it's past due time for Time To Dance and Sock It Away to finally face each other.