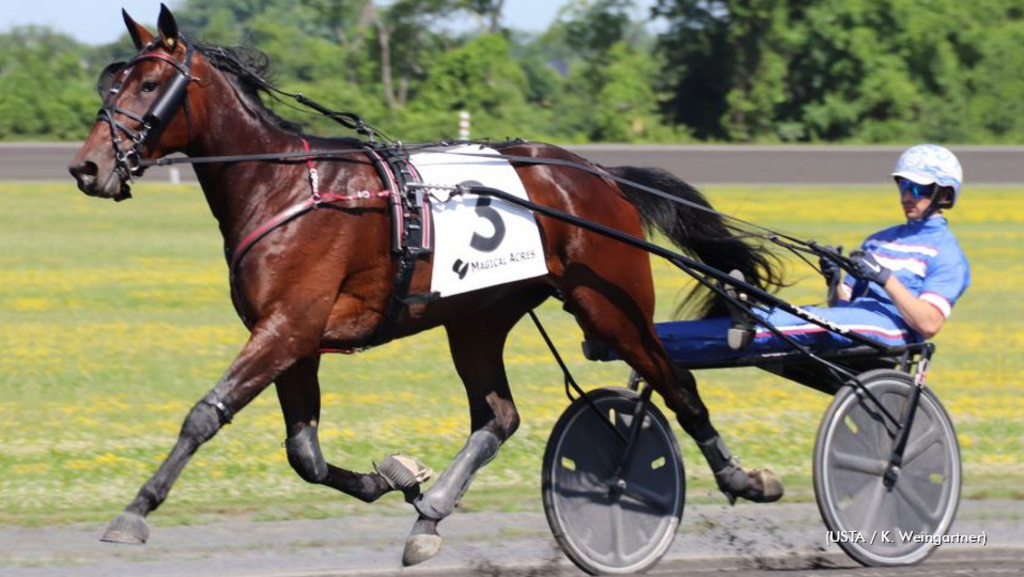 Instagram Model, a two-year-old female trotter purchased for $350,000 at last fall’s Lexington Selected Sale, made her qualifying debut Wednesday at Magical Acres, and got around the training centre’s five-eighths-mile oval in 2:03.1 to win for trainer Annie Stoebe and owner Lynn Curry.

Scott Zeron drove Instagram Model, one of his four winners on the day.

“We got what we wanted today,” Curry said. “Scott did a really nice job with her. It’s her first qualifying race, and that always makes me the most nervous. When you get a baby this far, it answers a lot of questions. Today she did fine. We’ll see where the next one is.”

Instagram Model was the 12th most expensive trotting yearling sold at the Lexington Selected Sale in 2021. Curry worried he might not get the filly after watching five trotters sell for at least $400,000 — including auction-topper Exile at $800,000 — in the group prior to Instagram Model, who was Hip No. 72.

“Early on, I really didn’t think I would have a shot at her,” Curry said. “I wanted her badly from the beginning, but I thought she would be up in that area. Believe me, when the hammer came down, we were a thrilled trainer and owner.”

Instagram Model is one of four horses owned by Curry, who bought his first in 2020.

“The minute we put (Instagram Model) on the track, she goes to work,” Curry said. “She loves the track. She doesn’t play around like babies do, and she’s been that way since we’ve had her. Today was a positive day, but there are a ton of great trotting fillies out there. This is just day one.”

Linda Toscano led all trainers in wins with the two-year-olds on Wednesday, posting triumphs with male pacers Fulton and Everybodyloveslou plus female pacer Cultured.

Fulton won his second time out in 1:57.1, the fastest mile of the morning among the freshmen. Last week, the homebred colt was timed in 2:00.2. Fulton (Heston Blue Chip-Bettor Be Steamin) is owned by Let It Ride Stables and Bottom Line Racing.

Everybodyloveslou, another homebred colt, won in 1:57.2 for owners Purple Haze Stables and Conrad Zurich. He is a son of Sweet Lou out of Beach Body and a full brother to Grand Circuit winner Somesweetsomewhere.

Cultured (Captaintreacherous-Fine Art) won in 1:57.2 for owners The Bay’s Stable, Two Horseman Stable, Fred Wallace, and Jaf Racing. She was bred by Diamond Creek Farm and purchased for $120,000 at the Lexington Selected Sale. Her dam is a three-quarter sister to Heart Of Mine, a Grand Circuit winner and multiple winner in the New York Sire Stakes.

“All three of them were good,” Toscano said. “I don’t know what they are, but they’ve done their work and they’ve done everything right from the beginning. That’s all we can hope for at this point.

“Fulton, last week we raced him up the inside and he had sneaky pace finishing. He was good. He had good pace finishing, so that’s all I really cared about. Cultured is a lovely filly and is out of a really good family. I love my Captaintreacherous fillies. You have to keep your fingers crossed when it comes to them because they can be anything.

“Everybodyloveslou has been about the nicest horse you could have training down. I’d have been disappointed if he didn’t go good because he’s been such a nice horse training down. Now, they just have to be able to elevate it and go against the big ones. I know they can go with mine, now they have to go against other people’s.”

Fulton is expected to make his next appearance in an overnight at Harrah’s Philadelphia while Everybodyloveslou and Cultured will qualify at The Meadowlands.

Devilish Dreams, who was fourth in a qualifier last week when she came home in :27 to be timed in 1:58.2, won Wednesday in 1:57.2, final quarter in :27.3, for owner Morrison Racing Stables and driver Andy McCarthy. The daughter of Lazarus N - Dreamingofwichita was bred by Kentuckiana Farms and sold for $35,000 at the Lexington Selected Sale. Her dam is a half-sister to A Rocknroll Dance, who earned $2.42 million lifetime.

Train Station (Roll With Joe - Also Encouraging) won in 1:58.2 in his debut for owner Robert Mondillo and driver Patrick Ryder. He was bred by Stephen Dey III and purchased for $25,000 at the Standardbred Horse Sale. His dam was a Grand Circuit winner.

Vici (Lazarus N - Triple V Hanover) won in 1:58.2 for owners Buckstone Land Livestock and Mondillo and driver Todd McCarthy. A week ago, he was third, timed in 2:01. Vici was bred by Donald Robinson, Michael Robinson, Steve Stewart, and James Daut. Purchased for $210,000 at the Lexington Selected Sale, he is a half-brother to Fulsome, a two-time winner on the Pennsylvania stakes circuit.

Angelpedia (Cantab Hall - Baker Black Jet) won in 2:01.1 in her debut for owners Gilbert Short and Ross Stables. She was bred by Ross Stables and sold for $35,000 at the Standardbred Horse Sale. Andy McCarthy was in the sulky Wednesday.

The live stream for the qualifiers is available below.