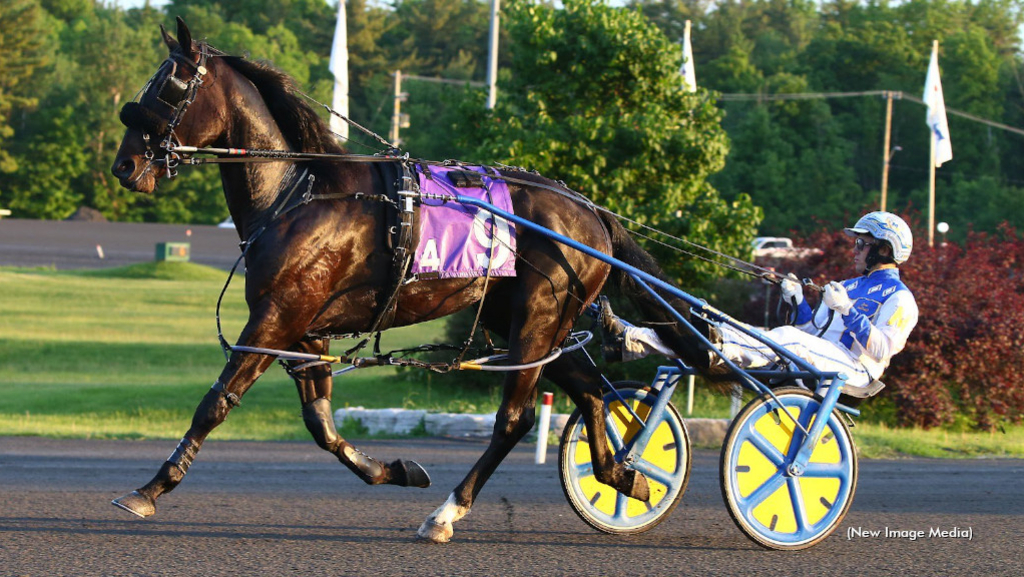 Kolby Two Step wasn't a horse that driver James MacDonald had piloted prior to June, and now the pacing colt from a modest stable is the one that gets the 2021 O'Brien Award winner one step closer to his first Pepsi North America Cup.

"I was kind of high on [Greatest Ending] and hoping to drive him," MacDonald told Trot Insider after Tuesday's post draw. "Something came up and he wasn't going to be available. Sometimes it works out. I drove Kolby Two Step last week because, in the Somebeachsomewhere Doug [McNair] had a double and I was lucky enough to pick him up for his first start of the year.  Doug did a great job qualifying him and bringing him along, and the horse was just coming into the race in top form and flew home, raced super, was second.

"They (the connections) were pretty excited; they were hoping they were going to be able to race but he got a bit behind," MacDonald continued. "Tim had said to me 'I'd really like to race him next week in the N.A. Cup elim' and I said 'well, do it! He's definitely good enough.'"

MacDonald helped punch the ticket to Saturday's million-dollar event for Kolby Two Step and his connections — trainer and co-owner Tim Gillespie of Grafton, Ont and partner Jason Churchill of Colborne, Ont. A $12,000 Ontario Selected Yearling Sale purchase, Kolby Two Step (Betterthancheddar - Dancing Heart) sports a summary of 3-2-0 from eight lifetime starts with $136,887 in earnings. He was fifth in the first elim, starting from post nine and pacing his back half in :52.2 to finish four lengths back of Pebble Beach, with his mile timed in 1:50.3.

A fifth-place finish in an elimination race isn't always a moment that brings joy to some that compete in the harness racing industry, but in this case MacDonald noted that the jubilation that accompanied the result was both warming and refreshing.

"Just to come off the track last week and see the raw joy, knowing that they're going to race in the North America Cup, Canada's signature race, you don't get good feelings and good vibes like that very often. You definitely get a feel when you talk to Tim and the crew. There's a lot of excitement following this horse and, you know, I'm one of the people excited."

MacDonald seeks his first North America Cup trophy in what will be his third attempt. Canada's top driver in 2021 and the current leader in wins and earnings thus far in 2022, MacDonald is grateful to have this opportunity and looking forward to Saturday's test.

"I'm a lucky guy. It's a great job, and I'm just really proud of what I've been able to accomplish and get to where I'm at," said MacDonald. "I'm just thrilled to be in the N.A. Cup...One day I would like to win it. I hope I win it, I hope I have many more opportunities to win. But this one is going to be a special one for me. I'm good friends with Tim's son [Jim] so it's gonna be a lot of fun. You know, win, lose or draw, they're gonna be happy. They really love their horse, and they take good care of them, just as I'm sure everyone does. But they're really excited, I'm really excited and can't wait for Saturday."

While acknowledging that elimination winners Beach Glass and Pebble Beach are the two favourites with the biggest targets on their backs for a good reason, MacDonald feels that there's an element of parity among the 10 sophomores that will have their noses on the gate come Saturday night.

"I think it's 45% of the elim winners that win the final. So I definitely have to watch out for Beach Glass and Pebble Beach, they're great horses. Obviously Night Hawk...it's a really deep bunch," stated MacDonald. "I think there's probably seven or eight horses that can win and hopefully we fall in that seven or eight category and, you know, I'm just going to race my race and hopefully things work out just right, the stars align and you hear a big roar for Kolby Two Step at the wire."

To watch and listen to the full interview, click the play button below.