Austin: “He’s Really Stepped It Up” 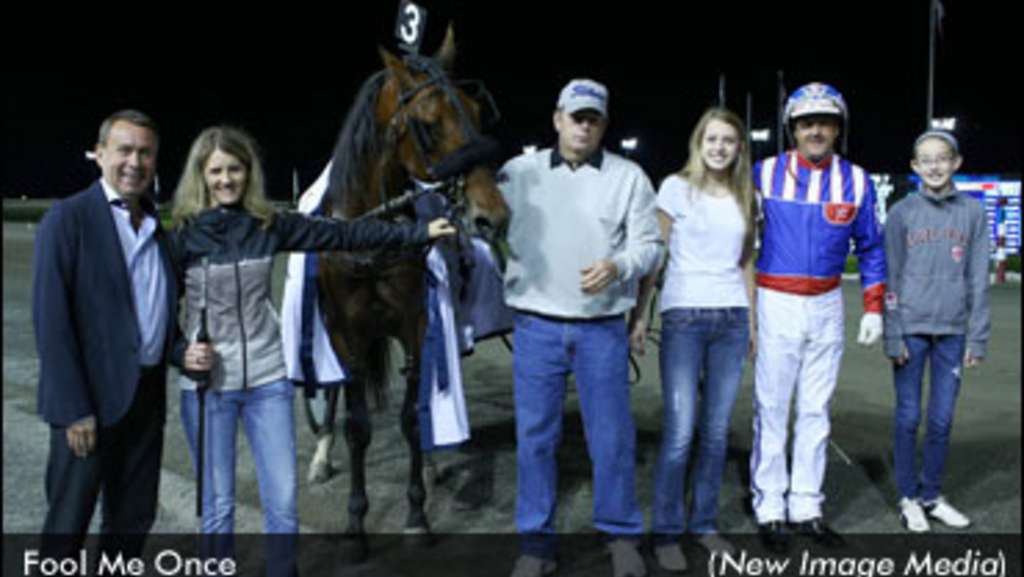 “The big thing with the colt is that he’s never been hurt. He had four starts under his belt going into the elim and he hasn’t been roughed up at all. It makes a big difference.”

Purchased for $70,000 at Harrisburg by the Mark Austin Stables and 1997 North America Cup winning co-owner Dan Smith, Fool Me Once earned $126,652 in purses with four victories from 10 starts as a two-year-old, including back-to-back 1:51.3 scores in the Bluegrass Series and International Stallion Stakes at The Red Mile. His solid freshman campaign convinced trainer Mark Austin that he had a Cup contender on his hands and made him one of the top 20 colts from 59 made eligible in Trot Magazine’s 2013 Spring Book, assessed at odds of 35-1 heading into his sophomore season.

Austin said it was clearer as the winter progressed and the son of Art Major filled out and matured.

“The biggest thing with the horse is he matured mentally,” said the Fergus, Ont. horseman. “Last year he just wasn’t focused a lot of the time. When I started training him back and he was more of a racehorse, I thought I had shot.”

Now two months into his three-year-old year with another $66,500 earned from four wins in five starts and a third-place finish in the Somebeachsomewhere Stakes, Fool Me Once is the 4-1 third choice in the morning line heading into Saturday's $1 million Pepsi North America Cup, drawmaster Jake Gardiner’s top pick, and the fastest starter in the field of 10 courtesy of his 1:48.1 wire-to-wire romp in last weekend’s elimination at Mohawk Racetrack.

That speedy mile was not a big surprise for Austin.

"The week before [the eliminations] when he was locked in the Somebeachsomewhere Stakes behind Campbell’s horse [Odds On Equuleus] there, Sylvain [Filion] came off the bike and he said ‘this horse is legit’ and I figured he could roll pretty good,” said Austin.

Filion was given the choice to drive Austin’s colt and the Mark Steacy-trained Sunshine Beach, who ended up winning that Somebeachsomewhere division. 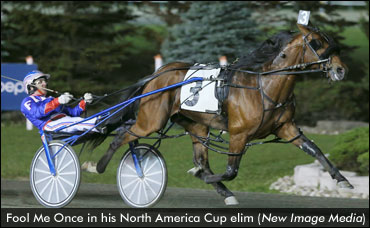 “He said to me, my horse is maybe a little more handy than Mark Steacy’s horse,” said Austin of securing Canada’s reigning Driver of the Year, who finished second with Goliath Bayama in the 1999 Cup and more recently fourth with Foreclosure N in 2011. Filion is looking to follow in his father Yves’ footsteps as a Cup winner on Saturday.

“He’s my best horse by far,” said Austin of his first Cup starter. “I’ve had a couple of other horses that were older horses, but he’s my best young horse by far.”

Equally impressive at the start of the race as the finish with :26 and change opening and closing quarters, the son of Art Major won his elimination by two lengths over Wake Up Peter and Martini Hanover allowing his connections to pick his post for the rich final. Though choosing second out of the three elimination winners, Austin ended up with his first choice and will start from post three on Saturday.

“He actually came out of the elims better than he did the ‘Somebeach’ the week before,” said Austin, whose nerves were eased by the colt’s current form and post selection.

The opportunity to race for a million-dollar purse in his first attempt is not lost on Austin considering the past year of troubles that plagued Ontario horse racing industry when the government decided to end the Slots-At-Racetracks program.

“Well I feel pretty lucky because a year ago this time it didn’t look we would have racing at all,” said Austin. “I just want to congratulate WEG on trying to keep the ball rolling here.”

Austin is hoping his versatile colt can keep his winning momentum for his biggest race this season and cash in on the opportunity of a lifetime.

“The one thing about the horse is he can leave real good and then you can drive him with two fingers after so you can do anything with him,” he said. “It definitely is [beneficial] because you’ve got 10 horses that are of equal talent and sometimes you have to change your racing plans.”