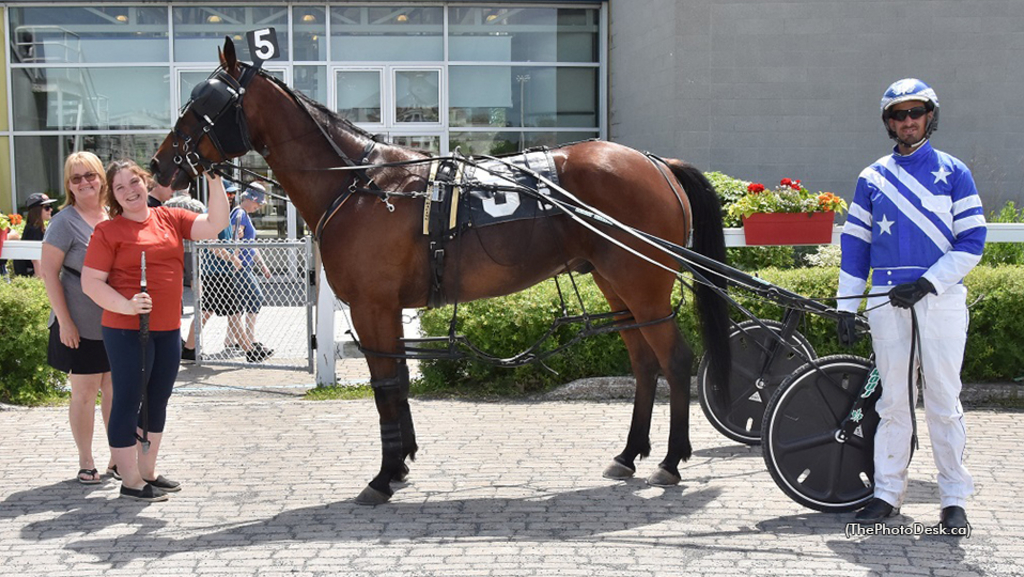 The sixth race feature saw Histoire Enchantee (Simon Delisle) shoot to the lead from the rail and park out Menlo Park (Stephane Brosseau) and three-wide Mickeymaksomespeed (Kiwon Waldron) to the first quarter in a speedy :26.3.

Menlo Park and Brosseau went on to take the lead while Waldron backed off with Mickeymaksomespeed and dropped into third place.

Coming down the stretch to the half-mile, Waldron came back first-over with Mickeymaksomespeed and gave second-over cover to the race favourite, Siddhartha and driver Steeven Genois. They went by the half-mile in :56.1.

They raced three in and two out down the backstretch to the three-quarters in 1:25.3 and around the final turn with Genois tipping three-wide with Siddhartha.

Coming to the wire, Siddhartha was an easy winner by two lengths over D Gs De Vito (Jonathan Lachance), with Mickeymaksomespeed third.

The win was the second straight in the Preferred class for Siddhartha. The six-year-old So Surreal gelding is owned and trained by Louis-Philippe Turcotte. He paid $5.40 to win.

If the name Platine Alpha sounds familiar, it should. She just won at H3R on Friday in the Mares Preferred 2 & 3 Pace and came back on Sunday and did it again.

Sunday’s $5,500 Preferred 3 for the older mares started off with Fancy Girl (Francis Picard) grabbing the early lead with Platine Alpha and driver Pascal Berube taking the two-hole spot as they raced to the first quarter in :27.4.

Going to the half-mile, there was little movement in :58.4, but then Sieras Rose came first-over for Genois with Bettimontheriver (Jocelyn Gendron) second-over down the backstretch to the three-quarters in 1:28.3. Meanwhile, Berube had a stranglehold on Platine Alpha in the two-hole.

Fancy Girl kept her lead coming down the stretch as Bettimontheriver had momentum and was gaining through the stretch. But as Fancy Girl started to drift to the outside, Berube found room along the rail and pointed Platine Alpha to it. Once she saw daylight, she took off for Berube and won going away by 1-1/4 lengths in 1:58.3. Bettimontheriver was second with Fancy Girl third.

The win was the second straight within two days for Platine Alpha. The four-year-old mare by Control The Moment has three wins this season from 10 starts. Last year, she was the winningest horse at H3R. Platine Alpha was bred and is owned by trainer Sylvain Tremblay’s Ecurie Alpha. She paid just $2.20 to win.

The $5,500 Preferred 3 Pace went to Goldinthebadlands, who duelled past leader Blue Moose (Marie-Claude Auger) during the final half-mile for the 1:55.2 victory by 1-3/4 lengths in rein to Brosseau. Favourite Windsun Cheyenne (Berube) finished third.

Alexane Laroche made her training debut a memorable one as five-year-old pacer Aethon and Genois prevailed by a neck over Like Lightning Lou (Jessica Turenne) in 1:56.4 in the afternoon's eighth race. The 23-year-old trainer from Levis, Que. shares ownership of the winner with Jean Laroche. Aethon paid $9.50 to win as the 7-2 third choice.

Live racing resumes at H3R next Friday with post time at 4 p.m.

(With files from Quebec Jockey Club)