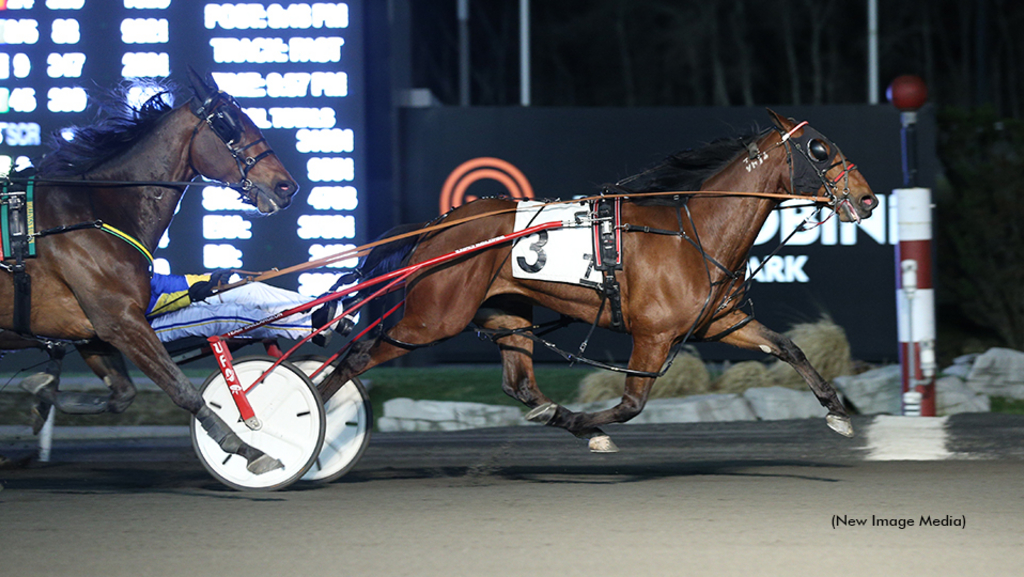 For the second straight week, the Somebeachsomewhere gelding Undrthsouthrnsun N parlayed a perfect pocket trip into a lifetime work – last week he won in 1:50 at Pocono, and on Sunday he lowered his mark by a tick by taking the $16,200 featured pace at Harrah’s Philadelphia.

Race favourite Ill Drink To That used the rail to push the Simon Allard-driven Undrthsouthrnsun N to a :25.4 quarter (the track was rerated from “good” to “fast” after this race) before he yielded the front, but the chalk was soon out to reclaim it, hitting the half in :54.1 and three-quarters in 1:21.3, at the latter station coming under pressure from first-over second choice Walknafter Midnite. Allard had his pacer perfectly placed just behind the embattled leaders and in the stretch took the inside route to victory over Lyons Steel, who had sat behind him the last five-eighths. Ill Drink To That and Walknaftermidnite had to settle for third and fourth, respectively.

Jennifer Bongiorno took over training the horse when he came south from Woodbine Mohawk Park in mid-May and she certainly has the pacer in peak form for M T Stables Ontario Inc. of Scarborough, Ont.

Three $9,900 divisions of American Harness Drivers Club competition for amateur drivers were also featured. Two of them were won by 25-year-old Johnathan Ahle, and one of them came with a horse only 10 years younger than he – the 15-year-old TSM Photo Bugger, a career winner of $886,984 and allowed to race in amateur events past his “retirement age.” In his second start of the year, the altered son of S Js Photo made a brisk backstretch move to the lead and went on to win easily in 1:56.1 for lessee/trainer Karen Fread.

Ahle also tallied with Lionhead as the Uncle Peter gelding got a two-hole trip then responded inside late to win in 1:58.3 for owner/trainer Terry Morgan.

The “pocket rocket” method was also successful for the E L Titan gelding Southwind Frost and driver Bob Heckhoff, a winner in 1:58.1 for trainer Michael Stallworth and Heckhoff’s own RBH Ventures Inc.

Harrah’s Philadelphia is back to its regular four-card-a-week schedule: Wednesday, Thursday and Friday at 12:25 p.m., and Sunday at 12:40 p.m.

(With files from PHHA/Harrah's Philadelphia)