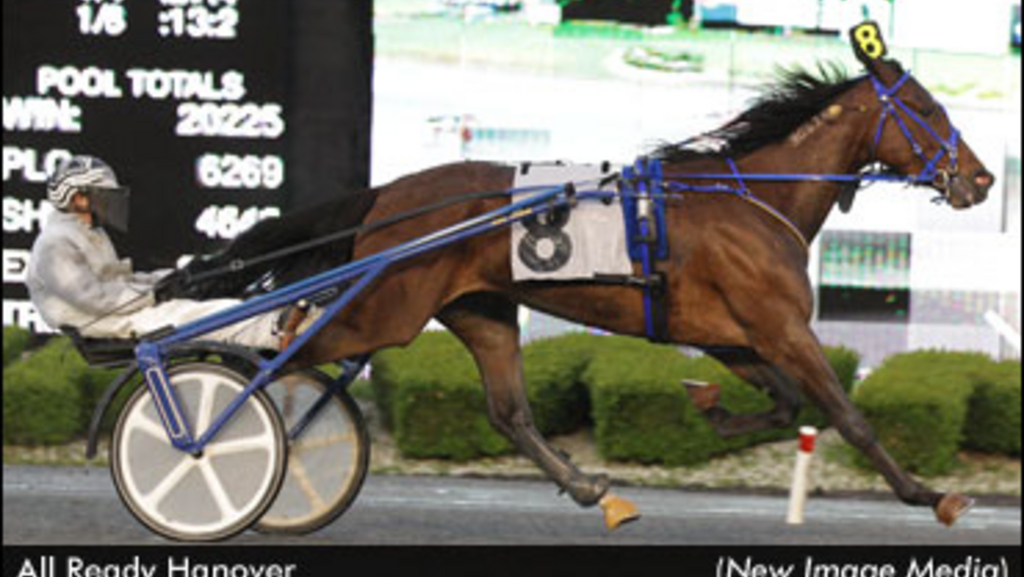 With Trevor Ritchie in the bike, All Ready Hanover converted a perfect pocket trip into a career-best 1:53.4 score over a sloppy track rated one second slow in the first $79,519 stakes division for Norwood, Ont. trainer and co-owner Ann Karin Larsen.

Ritchie fired the Chocolatier-Are You Ready filly off the gate from the outside post eight and settled in behind the popular post seven leaver Win Missy B (Paul MacDonell). All Ready Hanover played follow the leader through fractions of :27.4, :57.3 and 1:26.2 before unleashing a :27-second final frame to score the two and three-quarter length triumph. Multiple stakes winner Win Missy B settled for second in her season's debut while second choice Northern Miss Hall (Scott Zeron) closed well for third-place honours.

All Ready Hanover paid $11.40 to win as the 9-2 third choice. The lightly race filly notched her fourth win in seven career starts and lifted her bankroll to over $62,000. Norway's Odd Larsen also shares ownership of the Casual Breeze Stakes champion.

“She was a good looking filly, but she was making breaks for her previous trainer," said Ann Larsen, who purchased the filly for $5,000 at the Harrisburg Mixed Sale last year. "I think I got lucky because she’s such a professional and does everything right. That’s why I got my father [Odd] involved so we can have some fun together.

“She’s always been a nice filly. She doesn’t do a thing wrong and always wants to please you. She’s heavily staked this year, so hopefully things work out.”

Sylvain Filion worked out the winning two-hole trip for the Per Henriksen-trained Smarty Pants in the second $81,020 stakes division. She earned a new 1:56 speed badge in the process.

With favourite Idonette (John Campbell) made a break early on, second choice Lovely Vacation (Randy Waples) fired off the gate from post three and battled for the leading role early with Smarty Pants and 2011 O'Brien Award nominee Circles (Luc Ouellette) caught wide. Lovely Vacation hit the opening quarter in :27.3 while the outside pair dropped back into second and third.

Lovely Vacation rolled past the half in :57.1 and three-quarters in 1:26.4, but Smarty Pants pulled the pocket into the stretch and wore down the leader for the three and a quarter length tally. Lovely Vacation and Circles followed for second and third.

"Well I knew she was going to give me a good race because she was racing well coming into the race in her most recent starts,” noted Filion after the victory. “When that filly [Idonette] made a break, it encouraged my decision to press forward and it worked out.”

Smarty Pants returned $14.30 to her backers as the 6-1 third choice. The Kadabra-Twitty filly, who finished third in last week's SBOA Stake, has never missed a paycheque in 12 career starts. The win was her fourth lifetime and boosted her bankroll over the $100,000 mark for Ontario owners Stan Klemencic of Trenton, Dr. Brett Anderson of Port Hope, and Asa Farm of Norwood.

All Ready Hanover and Smarty Pants are both eligible to next Friday's Elegantimage Stake eliminations.

Earlier on the card, five-year-old pacing mare Western Silk swept to command down the stretch to win the $42,000 Fillies & Mares Open in 1:51 for driver Scott Zeron and trainer Casie Coleman.

Voelz Hanover (Mario Baillargeon) crossed over from the outside post six to take the early lead ahead of Waasmula (Keith Oliver) and reached the opening quarter in :27-seconds, but Warrawee Koine (Randy Waples) brushed up from third and cleared to command just past the :55.4 half-mile mark.

Waasmula advanced first over during the third panel with Western Silk moving second over from fourth. Waasmula cleared before the 1:23.2 third quarter station, but was faced with pressure from Western Silk into the stretch. Western Silk collared the eventual second-place finisher and opened up two and a quarter lengths before hitting the wire. Dreamfair Eternal (Jody Jamieson) closed well from the back of the pack for third.

The favourite paid $3.20 to win for the second consecutive time. Ross Warriner of Burlington, Ont. and Great Britain's Tom Hill share ownership of the Western Terror-Extemporaneous mare, who had won 26 races while banking over $1,669,378 in career earnings.

The win was one of three on the card for Coleman and one of four for Zeron.

(With quotes from WEG)