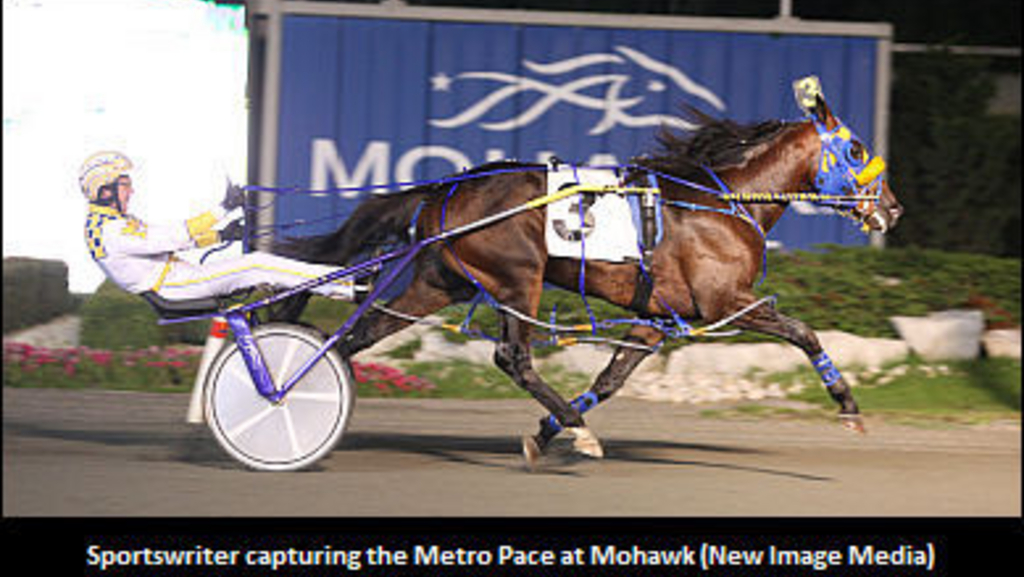 In what has been anticipated by many for weeks now, 2009 O'Brien Award winner Sportswriter made his 2010 charted debut this morning at Mohawk Racetrack

Rated as the 3-1 choice in Trot Magazine's 2010 Pepsi North America Cup Spring Book, the three-year-old son of Artsplace started from Post 7 in Race 9. Mark MacDonald spotted Sportswriter well into the first turn, as the duo were third at the :27.3 opening quarter. MacDonald moved the Casie Coleman trainee to the front in the second quarter, and Sportswriter clicked off the opening half while overland in :56.1. From there, MacDonald and the 2009 Metro pace winner passed the three quarters mark in a leisurely 1:26. Sportswriter paced his final quarter in :28.3 and posted a one and a quarter-length victory in 1:54.3.

"I was thrilled with the way he went," Coleman said afterward during an interview with the Woodbine Entertainment Group. "I know everybody wants to see you zoom in a first qualifier, but I don't. I'm not worried about qualifiers; we'll do that next week. He went a mile in (1:) 54.3; I had told Mark to go in (1:) 55. Next week we'll let him go a little bit, but he was absolutely awesome today and did everything that he was expected to do."

Regarding the way he handled him mile, Coleman said that Sportswriter did everything asked of him.

"He was perfect. He was pacing [well] and steering [well]. Mark let him drift out a little bit, but it was nothing to worry about. Mark just said that he let him drift a little bit. I have him with aluminum shoes up front for the first time today -- well, I've trained him with them during the week and his gait looks a lot sweeter this year than last year I think."

The mile did feature some slow middle fractions, but Coleman said that wasn't much of an issue at this point, seeing as though it was his first qualifier back.

"They went a pretty quick quarter, :27.3, and when he removed him Mark said he just put the brakes on. He went a middle half in about a minute and then let him sprint again on the end of it. He just kind of put him to sleep. We didn't want to go any faster than (1:) 55, so he was perfect."

"We're going to qualify him again next week -- next Thursday. Brian Sears is going to come and qualify him and we'll probably let him rattle a little bit -- I'm thinking (1:) 52 and a piece or 53 we'll let him go and then hopefully to a Three-Year-Old open after that."

Making her second qualifying effort of the year for driver Mark MacDonald and trainer Casie Coleman, three-year-old Western Terror filly Western Silk converted a pocket trip in Race 1. The filly sat through fractions of :28.3, :56.2 and 1:24.4 before getting up in the lane to post a nose victory in 1:53.2. The pacesetter in the dash was three-year-old Modern Art gelding Haul Away (42-1 in Spring Book). Trained by Dave Menary and driven by Jody Jamieson, Hail Away was making his first charted start of the season in the qualifier and started from Post 9.

After being forwardly-placed early and coming on later in the mile, three-year-old Astreos colt Keystone Raptor (45-1 in Spring Book) recorded a half-length victory in 1:54.4 for driver Jack Moiseyev and trainer John Kopas in Race 3, which served as Keystone Raptor's second qualifier of the season. Driven by Jody Jamieson and trained by Jack Darling, the three-year-old Rocknroll Hanover filly Ticket To Rock finished second in the dash, which was also her second qualifier of the season. Driven by Steve Condren, the Robert McIntosh-trained You See LA, a three-year-old daughter of The Panderosa, finished third in the dash and paced her mile in 1:56.1.

Driven by Sylvain Filion for trainer John Kopas, three-year-old Grinfromeartoear colt Grin For Money (35-1 in Spring Book) put in his second qualifier of the year in Race 5. After leaving from Post 8 and working out a pocket trip, Grin For Money go up to post a neck victory in 1:54.1. The win came over three-year-old Million Dollar Cam colt Future Million, who was making his racing in what was his second qualifier of the year for trainer Don Lowes. Three-year-old Royal Mattjesty filly Bay Girl, who was making her seasonal charted debut for driver Mark MacDonald and trainer Casie Coleman, finished fourth and paced her mile in 1:57.

Making his second qualifying effort of the season -- his first of 2010 at Mohawk -- three-year-old Kadabra colt Text Me was much the best for driver Randy Waples and trainer Bob McIntosh. Waples and his mount got away second, earned the lead before the half and powered off on their rivals. The pair went on to post a 12-length win in 1:57.4.

In what was his second qualifying effort of the season, the Casie Coleman-trained and Mark MacDonald-driven Lucky Man was much the best in Race 7, as the five-year-old Camluck gelding went wire to wire in 1:52.3 and won by more than three lengths. Besides Anderlecht, who finished second, the rest of the field was at least 12 and a half lengths in arrears of the winner.

In what was his second qualifying effort of the season, four-year-old Million Dollar Cam horse Millionaire Cam was triumphant for driver Jody Jamieson and trainer Tony O'Sullivan, as he went wire to wire in 1:56.3, good for a seven and a quarter-length victory over second-place finisher Our Lucky Killean, who had been racing in Florida earlier this season.

To view the results from the Mohawk qualifying session, click here.

Down south at the Meadowlands Racetrack in New Jersey, qualifiers were also on the menu this morning, as another full 15-race slate kept the East Rutherford oval busy.

In what was her second qualifying effort of the season, standout three-year-old Muscle Yankee filly Costa Rica was triumphant in Race 4 for driver Ron Pierce and trainer Jimmy Takter. After taking a pocket trip to the opening half, Pierce went first over in the third quarter, acquired the lead and trotted home for a one and a half-length win in 1:58.1 off a :28.3 final quarter.

Race 10 saw three-year-old Western Terror filly Preppy Party Girl make her seasonal charted debut fro trainer Erv Miller and driver Yannick Gingras. After sitting third through the first three quarters of the dash, Gingras and his filly came on in the final quarter and went on to post a one-length victory in 1:53.3 via a sharp :26.2 final quarter.

Race 14
In what was his first charted mile since his $1.3-million three-year-old campaign, Jimmy Takter's Vintage Master made his 2010 in Race 14. The son of Western Ideal was paired with driver Dan Dube, and the duo clicked for a wire-to-wire, one-length win in 1:54.2.

Race 15 was the scene of Down Under pacing phenom Auckland Reactor's second-ever qualifying mile on North America soil. Trained by Kelvin Harrison and driven by Brian Sears, the six-year-old son of Mach Three took a pocket trip through the fractions (:27.2, :56.4, 1:27.1) before coming on for a six and a half-length victory in 1:54. Auckland Reactor came his final quarter in :26.3.

To view the results from the Meadowlands qualifying session, click here.