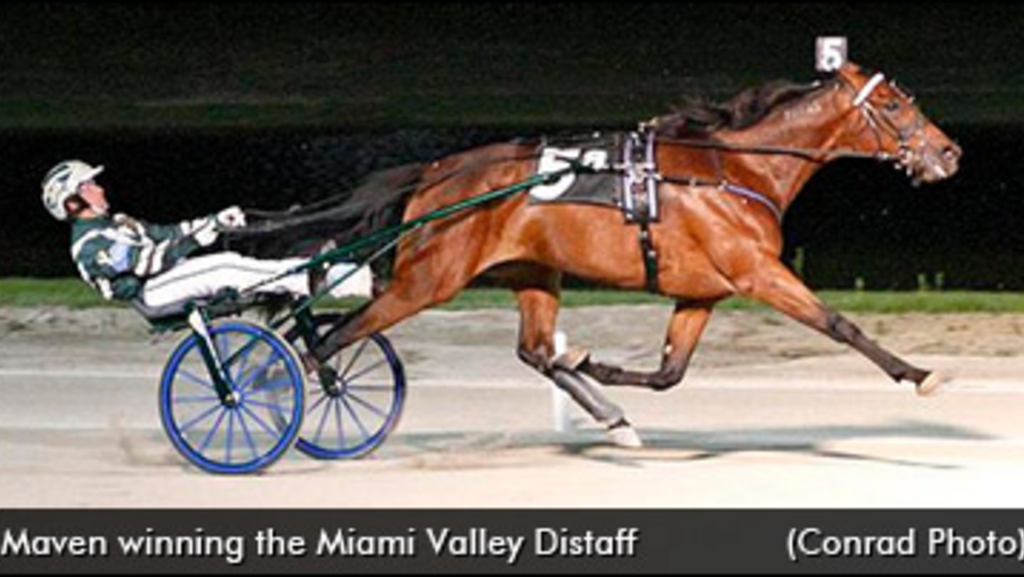 A double shot of Grand Circuit action was on display Sunday evening at Miami Valley Raceway, as the Ohio oval hosted the $50,300 Sam ‘Chip’ Noble Memorial and the $60,000 Miami Valley Distaff.

Shebestingin became the fastest performer in the history of the track when she toured the strip in 1:50.4 for driver David Miller. The Joe Holloway trainee survived a first-over trip en route to wearing down the tempo-setting favourite, Yagonnakissmeornot. That foe was second best, with Jerseylicious taking home third prize.

The four-year-old daughter of Bettors Delight-Armbro Tussle, who is owned by Val Dor Farms, Ted Gewertz and L And L Devisser LLC, is now 2-for-2 to start the season after going 12-for-19 last year. The 16-time winner boosted her bankroll to $716,602 with the victory.

Each of the drivers in the first annual Chip Noble Memorial wore armbands with 'Chip' printed on them to honour the memory of one of the greatest horsemen in Ohio harness racing history. Noble, who succumbed to cancer in January, was a soft-spoken gentlemen who was liked by all, and one who possessed incredible talent and a gift for getting the very best out of almost every horse he trained or drove.

Maven was a cut above the rest in the $60,000 Miami Valley Distaff. The Jonas Czernyson pupil was a front-stepping winner in a track record clocking of 1:53.3 for driver Yannick Gingras.

Rockin With Dewey parked Maven past the quarter in :27 before Maven worked her way to the lead. She proceeded to carve out middle panels of :56.4 and 1:26.1 before using a :27.2 closing quarter to win in going away fashion over Rockin With Dewey. Maven’s stablemate, Dorsay, took home the show dough.

The five-year-old daughter of Glidemaster-M Stewart, who will now prepare for a trip to Europe to participate in this year’s Elitlopp, kicked off her 2014 campaign in fine form for owner William Donovan of Ft. Lauderdale, Florida. The 26-time winner lifted her lifetime earnings to $1,457,759 with the win.

The 11 drivers who competed in the two Grand Circuit races had an amazing total of 63,759 wins and their mounts had earned over $621 million.

With the 65-night inaugural meet reaching its conclusion, awards were presented to the meet's Top Driver and Top Trainer on Sunday night as well. Kayne Kauffman was crowned dash champion among drivers with 88 triumphs. Dan Noble, Chip's son, finished second with Jeremy Smith third in the standings. On the training side, Virgil Morgan Jr. captured his first Miami Valley conditioners title, but not without a fight from Chris Short and Jeff Brewer who dead-heated for second. Morgan has won numerous consecutive training titles at Scioto Downs in Ohio and is a respected, high-percentage trainer wherever he sends horses at the top tracks throughout the industry.

(with files from Miami Valley)