History Made At The Meadowlands 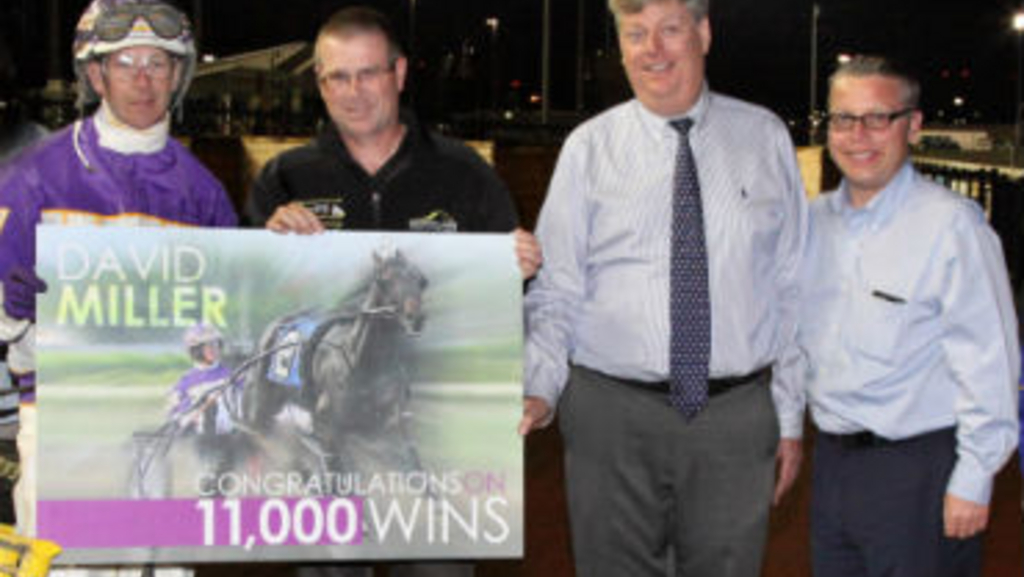 With over 12,000 people attending the Kentucky Derby festivities throughout the day, The Meadowlands inherited a huge crowd remaining from the Derby day afternoon's business and they were witness to two milestones on the program.

It's not every day that a world record mile occurs in a C-1 Pace, but that happened tonight at The Meadowlands in the 11th race as Mighty Young Joe lowered his lifetime mark again at age 11, to 1:49.3 for trainer/driver Stacy Chiodo. That mark is the fastest mile ever for a female driver and the first sub-1:50 mile by a female driver, and Chiodo clearly knew it as she waived her whip in triumph when she crossed the wire and saw the teletimer. For Mighty Young Joe, this marked the 30th victory in his career, with earnings approaching $500,000.

On the heels of that milestone came another, as Dave Miller guided Dull Roar to a 1:50.3 victory in the 12th race C-2 Pace for the 11,000th win of his driving career. Miller will be inducted into the Hall of Fame this summer.

The Saturday night feature saw ten sophomore colt pacers assemble in the $47,253 “Albatross” John Simpson Memorial - a Grand Circuit stake. JK Endofanera made his sophomore debut a winning one via a long uncovered move in 1:49.4 for Yannick Gingras.

Away mid-pack as Allstar Partner rolled off fractions of 26.3, 55-, and 1:23.2 Gingras edged JK Endofanera into a first-over position attacking the leader until he succumbed to the winner's unrelenting presence. Jet Airway was a fast closing second and Ideal Cowboy third.

The Art Major colt is trained by Ronnie Burke for the 3 Brothers Stable of New York who are both owner and breeder.

As April turns to May a number of three-year-olds are starting to show up in preparation for stakes engagements and trainer Tony Alagna sent out a pair of impressive Somebeachsomewhere colts making their 2014 debuts.

Maxi Bon set a hot pace then drew away from a Non Winners of two in 1:49.4 with a :27.4 closing panel. He is owned by Carver Stables, Dave Prushnok, Joe Sbrocco and Eagle Soar Partners.

A few races later in another division of the same class, Thats My Opinion moved to the lead going to the half through slower splits and broke his maiden in 1:50.3. He is owned by the partnership of Brittany Farms, Marvin Katz, Joe Sbrocco and Little E LLC. Scott Zeron drove both colts.

Alagna also sent out Odds On Equuleus for his four-year-old debut in a B-2 overnight and the 2013 Meadowlands Pace runner-up won his first race since September of 2012 in a career-best 1:49.1. He was driven by Tim Tetrick and is owned by Odds On Racing of Ft. Lauderdale.

B-1/A-2 pacers raced for $22,500 in race two with Rockin Amadeus winning for the second time in three 2014 starts, this one in a new personal record of 1:49.1. Corey Callahan sent him right to the front and rated even numbers before sprinting home in :26.3 to close the deal. Frankies Dragon was a very game first-over and went right to the wire with the winner.

Rockin Amadeus is owned by Lothlorien of Ontario and hails from the Takter barn.

Racing returns to The Meadowlands Friday with first post time at 7:15 p.m. That program features the Reynolds Stake for three-year-old filly pacers as well as the John Simpson Memorial for three year old colt and filly trotters. Saturday launches the 2014 Free For All Championships with the first leg in the form of a $50,000 Free For All for the pacers and the eliminations for the Arthur J. Cutler Memorial for the trotters.