A "Walk In The Park" For Father Patrick 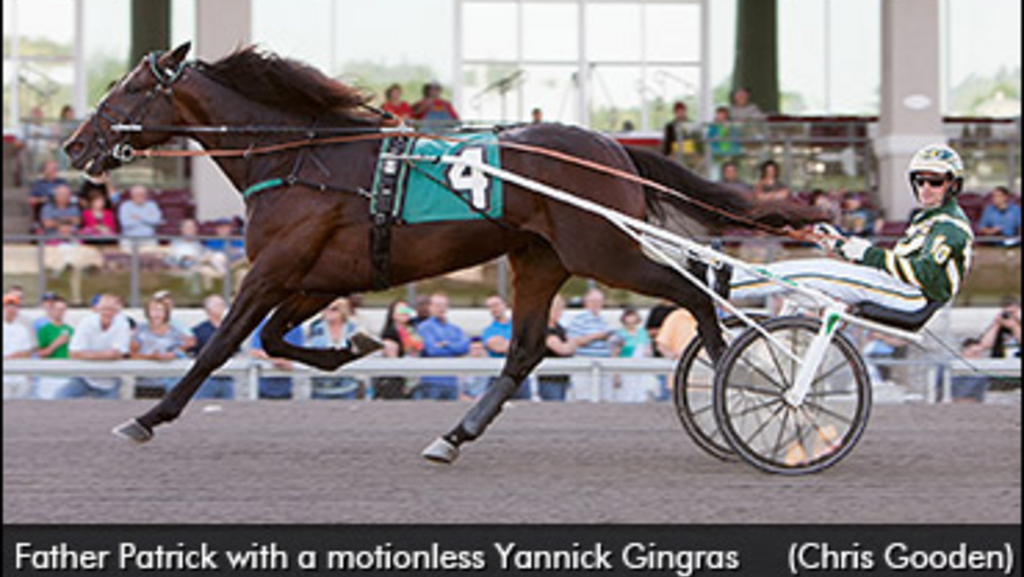 Juvenile champion Father Patrick polished his credentials as the leading Hambletonian hopeful Friday at The Meadows when he romped to an amazing 19-3/4 length victory — his 11th consecutive win — in a $211,700 Pennsylvania Sires Stake known as the Super Bowl.

Nuncio, Father Patrick’s stablemate, also captured a PASS division, giving trainer Jimmy Takter a powerful duo on the road to the Hambletonian. The third split went to Datsyuk, who remained undefeated in three career starts and announced that his presence will be felt in the three-year-old trotting colts and geldings division.

Hammered down to 1-9, Father Patrick was away fourth for Yannick Gingras. When asked for trot down the backside, the son of Cantab Hall-Gala Dream exploded past a so-so field and scored in 1:53.1. Scirocco Jakob was a distant second, with Jett Star third.

“He’s already raced a lot more than this, so this was just a little walk in the park, trying to put a little foundation in him for the first week in August,” Gingras said. “I’ve yet to turn him loose — not even a little bit. He could go in 1:51 now, but all these 1:53 miles will help save him.”

Takter said the champ, who now has earned $797,838 for Father Patrick Stable, got what he needed from the race.

“It was perfect,” Takter said. “Under wraps in 1:53.1? It was the kind of race we need, like a stepping stone. He just looked fantastic.”

Nuncio had to work much harder, trailing by five lengths at the half. He moved uncovered for John Campbell, wearing down the leader, the previously undefeated Wheelsandthelegman, and scored in 1:53.2. Madewell Hanover rallied for second, two lengths back, while Wheelsandthelegman saved show.

“Our main concern is manners and keeping him quiet the first part of the race,” Campbell said. “He’ll finish for you — I wasn’t worried about that. Last year he got too aggressive and wanted to go too much too early in the mile. Jimmy’s got him settled down. We’ve been a little extra cautious because we know what he can do. He’s getting better all the time. He has so much trot when he’s relaxed.”

With the win, the son of Andover Hall-Nicole Isabelle, who never has been worse than second in 12 career starts, vaulted over $500,000 in career earnings for Stall Tz Inc.

Datsyuk, named for Detroit Red Wings star Pavel Datsyuk, rushed to the front for trainer/driver Charlie Norris and scored in 1:54.1 in his second straight PASS victory. UVA Hanover was three-quarters of a length back in second in his seasonal debut, with DDs Hitman completing the ticket.

Norris, who owns the son of Explosive Matter-Pink Ribbons with Leonard Buckner, said the colt was sidelined at two by an unusual injury.

“He had a muscle underneath his shoulder that wasn’t torn, but it was stressed,” Norris said of the $17,000 yearling acquisition. “It took us a long time to figure out exactly what it was. It doesn’t bother him now when he’s in high gear. I really loved him last year, but he was worth waiting for. He’s eligible for all the big races.”

In the $18,000 Winners Over $10,000 Life/Preferred Handicap Pace, Sam Hill made it three straight by rallying to win in a sharp 1:50.4 for Greg Wright Jr., trainer John Sullivan and owner Don Tiger. Dew N Doughnuts was second by a head while Exactly Black earned show. The eight-year-old Artsplace-Apple Of My Eye Gelding extended his career bankroll to $273,389.