Stars Come Out At Gaitway 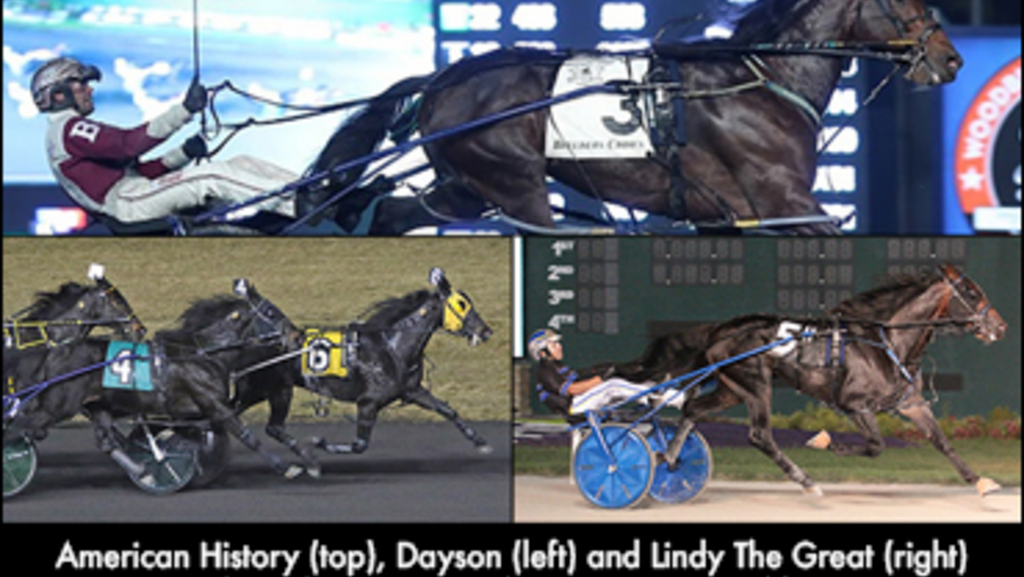 When Standardbred racing returned to the Garden State on Friday morning (May 29), with 187 horses contesting a marathon qualifying session over the one-mile track at Gaitway Farm in Manalapan, N.J., trainer Ron Burke's stable was in full force, accounting for the day's fastest mile and five other winners, and Breeders Crown winner American History turned in a strong showing of the shelf, but it was on the trotting side where the stars more readily came out.

Millionaire Dayson picked up immediately where he left off for the Burke Brigade, throwing a 1:54.1 mile under Yannick Gingras after also winning his final start — a top-level conditioned event at The Meadowlands on Feb. 21 — before his forced layoff.

“Dayson’s mile was exactly what you would expect,” Burke told Trot Insider with respect to the seven-year-old Conway Hall gelding's effort. Gingras gunned Dayson to the fore from post 7 to clear Resita (Tetrick) through a :28.4 first split, and the pair remained uncontested through splits of :57.3 and 1:25.2 en route to a 1-1/2 length score. Burke also accounted for Winning Shadow (1:54.4, Gingras) among square-gaiters.

The sparkling performance of Dayson — owned by Burke Racing Stable, Weaver Bruscemi, Karr and J&T Silva-Purnel & Libby — was however overshadowed by that of Lindy The Great, whose 1:53.2 mile took top honours among five trotting heats.

The six-year-old Crazed entire and driver Andy Miller took over from Max (Dunn) just beyond a :28.3 quarter, only to then coast through middle splits of :57.3 and 1:25.4 and edge clear to win easily by 3-3/4 lengths.

"We were very happy with him," trainer Julie Miller said, indicating that Lindy The Great drew away while under a "confident hand drive to the wire."

The six-year-old son of Crazed debuted for Team Miller in the qualifier, having been acquired by the Andy Miller Stable Inc. and Team Lindy The Great in April after winning 14 races and amassing over $680,000 in his first four seasons of racing.

On the pacing side, American History proved strong in his return to action, mounting a powerful middle move and winning his first public appearance in six months facilely for trainer Tony Alagna.

The five-year-old son of American Ideal brushed from third in line to Joe Bongiorno on the far turn to surge past Rojans Way (Gingras), who set tepid early fractions of :29.2 and :58.2. American History, a millionaire whose greatest triumph was his 1:48.3 win in the 2019 Breeders Crown at Woodbine Mohawk Park, was individually timed with a :26 third quarter — which he used to secure control, and he sped away to win in 1:52.2 by 4-1/4 lengths. Live Like A Boss (Tetrick) rallied mildly out of traffic to save second, while Tact Tate N (Patrick Berry) circled stalled cover for third.

Brittany Farms, Marvin Katz and American History Racing co-own American History, who took his mark of 1:47 at The Meadowlands as a three-year-old before enjoying marquee wins in the Kentucky Sire Stakes and Tattersalls Stakes at three and the Bobby Quillen Memorial at four.

Raceway stalwart Larry Karr — the equine version — posted a strong 1:51 mile in preparation for his return to action, and Burke has high hopes for the rest of the A Rocknroll Dance gelding's five-year-old campaign.

“He was the best he ever was,” Burke said.

In rein to Dexter Dunn, Larry Karr led Revelry (Tim Tetrick) in a cat-and-mouse game through the entire mile, clicking off splits of :28.2 and :57.2 before flooring it through a :26.2 third sectional and speeding off by 5-1/4 lengths.

Larry Karr was victorious in his last race before action in the United States halted, posting a 1:53.1 victory in a mid-level conditioned race at Pocono three months ago to the day. The Burke Racing Stable, Weaver Bruscemi, Larry Karr (the human) and Frank Baldachino own the 18-time winner.

A 26-race qualifying card is scheduled for Saturday (May 30) at The Meadowlands, with further qualifiers to be offered at Gaitway on Sunday (May 31) and Tuesday (June 2).