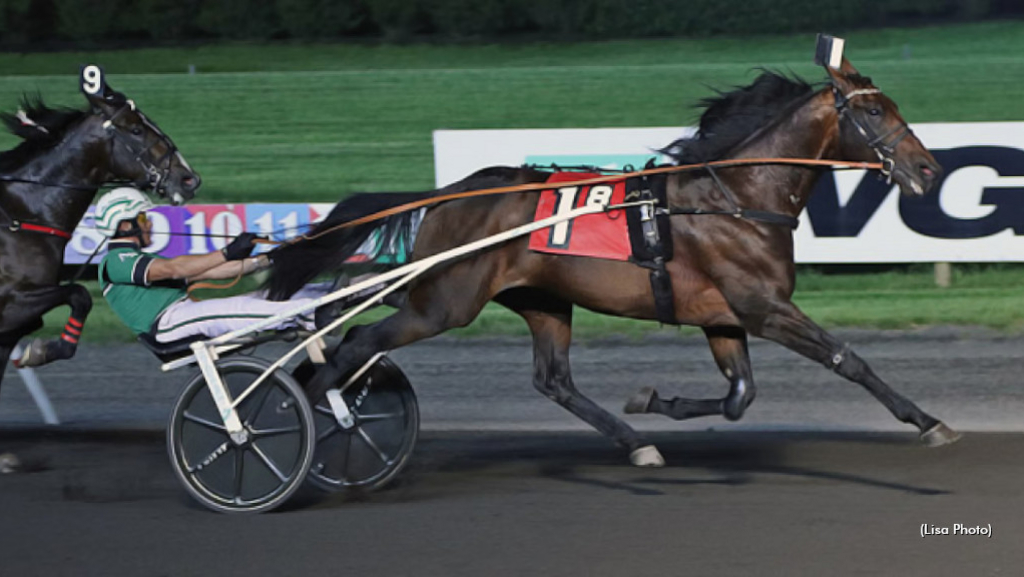 On an unseasonably warm, 86-degree night, Ecurie D DK made his seasonal debut a memorable one by scorching the one-mile oval at The Meadowlands in a world record 1:49.1 to win Saturday’s $170,450 Arthur J. Cutler Memorial for older trotters by 1-1/2 lengths over Cuatro De Julio. Bella Bellini finished third.

The time was the fastest May trotting mile in harness racing history, besting the 1:50 clocking by Katies Lucky Day at The Meadowlands last week, and set the world record for an older trotting stallion on a one-mile track. It also equalled The Meadowlands track record established by mare Atlanta in 2020.

Ecurie D DK, a six-year-old driven by trainer Åke Svanstedt, was fourth through the first half of the Cutler Memorial as Lovedbythemasses led the field to the opening quarter in :26.3 before Cuatro De Julio took control and got to the half in :54.

Cuatro De Julio was still on top at three-quarters, reached in 1:22.1, but Ecurie D DK was already up to second on his outside and ready to sprint home when they reached the stretch.

By winning his first start of the year, Ecurie D DK improved to three-for-thee in the U.S. since his arrival from Europe. He entered the Cutler off one qualifier, a 1:54.2 win May 6 at The Meadowlands.

“Those aged horses, they are not like the young horses that might need a couple of races, at least our horses, so I had confidence,” said Åke Svanstedt’s wife, Sarah, who helps run the training stable. “Me and Åke said he could be at least around 1:50 today, but [1]:49.1 was very impressive. I’m very proud.”

Ecurie D DK’s victories last season included the Breeders Crown Open Trot. An established star in Europe prior to coming to the States, the son of Infinitif-To Soon has won 18 of 24 career starts and has earned $868,593.

“When you see him, at home too, he is always a happy horse,” Sarah Svanstedt said. “But when he comes here [to the track], his energy goes to race mode and he loves to go out on the track. He’s not a grabby, aggressive horse, but he knows his race day and he loves to go to work. I love those horses that know before a race that, ‘Today is the day; I’m going to fight.’”

Ecurie D DK, who was born in Denmark, is owned by Marko Kreivi Stables Inc., Suleyman Yuksel Stables Inc., and Åke Svanstedt Inc. He was bred by Jean Pierre DuBois.

Sarah Svanstedt said there was no set schedule at the moment for Ecurie D DK.

“We will take it step by step,” Svanstedt said. “The Breeders Crown is the main goal, and the International Trot would be nice to be part of too.”

The Cutler Memorial is named in memory of Arthur J. Cutler, the famed restaurateur and harness racing enthusiast who passed away at age 53 in 1997.

“I just can’t believe it’s been 25 years since we lost Artie,” Meadowlands Racetrack owner Jeff Gural said. “I really miss him. For people who didn’t know him, he was a great guy. He loved the races, loved The Meadowlands. It was a big loss, but we’ve been able to honor his memory all these years.”

Saturday night at The Meadowlands might have belonged to Cutler winner Ecurie D DK, but Nicholas Beach had himself a memorable night as well, scorching the mile oval in 1:47 in the $40,000 Open, and in the process, established a national season’s record for pacers.

“No words can truly describe what this horse means to us,” said Jenn Bongiorno, trainer of Nicholas Beach. “He has all the talent in the world.”

And it was on display Saturday.

The six-year-old gelded son of Somebeachsomewhere-Michelle My Gal sprinted away from post six in the seven-horse field and ripped off the opening quarter in :26. Jenn’s driver, her brother Joe, was able to rate the second fraction back to :28.2.

Then the speed show was on.

Nicholas Beach powered clear of the field by 2-1/2 lengths at three-quarters after a :26.2 split had him break that beam in 1:20.4 before a flying final quarter of :26.1 helped him lower his previous lifetime best by two-fifths of a second. It was 2-3/4 lengths back to second-place finisher This Is The Plan with 6-5 favourite Jacks Legend N grabbing the show dough.

“This week, he trained incredibly,” said Jenn. “Joe’s been doing such a great job driving him and keeping him brave as we realize this is a very long season. On to the [$100,000] Commodore Barry [at Harrah’s Philadelphia on May 29].”

Owned by John E. Lengacher, Michael Cote Gagnon and Jennifer Bongiorno Stable LLC, Nicholas Beach paid $8.20 to win as the 3-1 third choice in the betting. He now has 19 wins from just 35 career starts, good for career earnings of $413,121.

SUPERSTARS ON THE UNDERCARD: Atlanta got into the win column with an easy 2-1/4 length score over Yanks Dugout in a $31,500 Open for trotters. The Ron Burke-trained, Yannick Gingras-driven seven-year-old daughter of Chapter Seven-Hemi Blue Chip, who got gunned down by Herculisa in her seasonal debut two weeks ago, stopped the clock in 1:51.2 and paid $2.10 to win.

Watch Me Now N worked out an ideal pocket trip before sneaking through the inside late to pull off an upset at odds of 16-1 in a $31,500 Open for fillies and mares on the pace. Test Of Faith, the 1-9 favourite and defending U.S. Horse of the Year, raced from sixth and last, picked up cover from 5-1 second choice Amazing Dream N down the backside, but simply had too much to do and came up three-quarters of a length short in second. Watch Me Now N, driven by Dexter Dunn and trained by Tony Alagna, paid $35.80 while lifting her lifetime stats to 12 wins from 28 starts. The six-year-old daughter of Hes Watching-Mach N Elle, who paced the mile in 1:49, now has earnings of $159,109.

WHAT’S YOUR HANDLE: Betting on the 13-race card was extremely vigorous, as a total of $3,412,840 was put in play, highlighted by race seven, which took in $444,633 worth of action. It marked the 11th time this year that betting busted the $3 million barrier at The Big M. The only time wagering was higher than Saturday’s program was on March 5, when the all-source handle totalled $3,755,422.

A LITTLE MORE: Burke and Gingras were up to their usual tricks, teaming up to win four times on the program, to lead the trainer and driver colonies, respectively. … Mark MacDonald had a driving triple. … The 20-cent Survivor Pick-7 took in $13,728 worth of action, and at the conclusion of the wager, those who cashed walked away with a handsome $3,888.66 for seven correct selections. … The 20-cent Pick-6 started with a modest carryover of $6,167, leading to a total pool of $57,610. Those who had six winners on their tickets cashed in for $779.32.

The North American season's record for pacers was actually set 3 times last night: It was first set in the first race when Primary Colors won in 1:48. It was reset in the very next race when Bettors Donttell won in 1:47.3 and was reset a second time when Nicholas Beach won in 1:47.

Even with 2 trotting races on the card, 10 of the 13 races last night went in sub-1:50. I wonder when we'll have the first racecard in which every single race goes in sub-1:50?