Harness Racing Is Back! 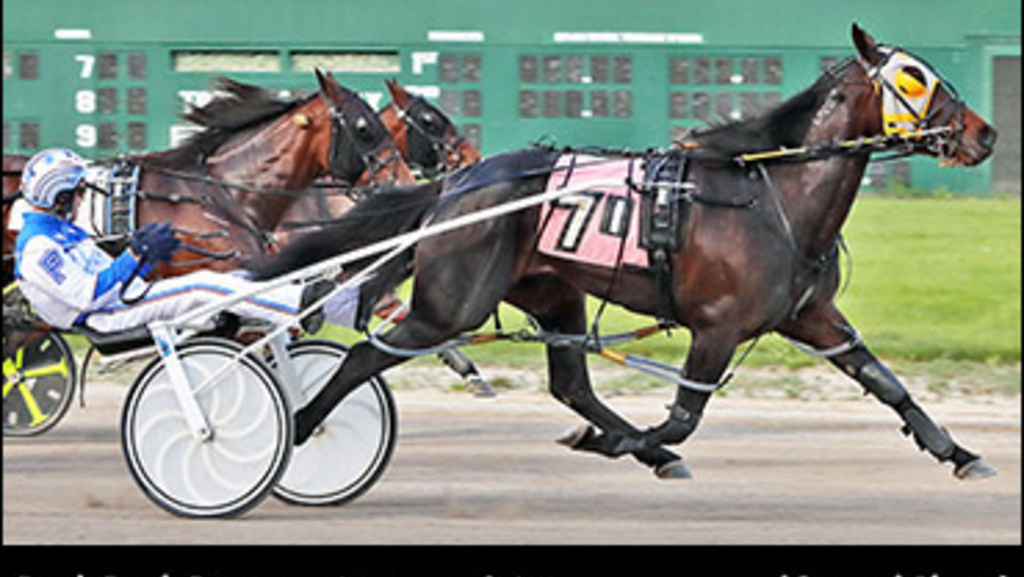 For the first time in nearly two months, harness racing was conducted for a pari-mutuel audience in North America as Scioto Downs hosted a 12-race card on Friday (May 22).

Trainer Ron Burke enjoyed a successful first night back at the races winning four of 12 on the card. Burke trainees Duck Duck Dragon, Wittyville, Rosemary Rose and Libbys Idea were all able to find their way to the winner's circle on Friday night.

The Open Trot ended in a dead-heat for win with Peggy Sue and trainer/driver Brady Galliers and Eye Ofa Tiger AS and driver Elliott Deaton for trainer Anette Lorentzon. Race favourite Workinitonbroadway (Chris Page) broke stride early leaving Wildfire Seelster to cut out early fractions of :28.1, :58 and 1:26.3 before Peggy Sue and Eye Ofa Tiger AS picked off Wildfire Seelster to hit the wire together in a mile time of 1:55.1.

Peggy Sue (Brady Galliers, inside) and Eye Of a Tiger AS (Elliott Deaton, outside) dead-heat in the Open Trot.

The Fillies & Mares Open Pace went to Rosemary Rose for the red-hot tandem of Page & Burke. The six-year-old mare took a backseat approach while St Lads Gidget led the field through fractions of :26.4, :55.2 and 1:23.1. Rosemary Rose mapped out a second-over trip, tipped off cover in the lane and held off Sally Fletcher A (Brett Miller) to win by a nose in 1:51.2.

Rosemary Rose (Chris Page, inside) victorious in the Open Mares Pace over Sally Fletcher A (Brett Miller, outside).

Reports indicate the total handle on the 12-race program was $1,054,294, the second highest handle in history at Scioto Downs and the first million-dollar handle at the five-eighths-mile oval in more than 20 years.

With harness racing being paused continent-wide amid the COVID-19 pandemic, Scioto hosted the first card of harness racing since Cal-Expo last raced on March 31. The Ohio track will race twice more over the U.S. Memorial Day weekend, on Saturday (May 23) and Monday (May 25) as the only active Standardbred track in North America.

Just a question: Have any of

Just a question: Have any of the tracks reached out to ESPN or TSN to consider live broadcasting? Seems like the perfect time to get more people interested in the sport again with limited sports being broadcast.

Handle was $1,054,294, 2nd highest total in SD history. A pattern that will likely follow in Ontario and elsewhere for a few weeks anyway.