Real Joke meant serious business as he unleashed a 1:47.3 mile to win the $32,000 Invitational Pace on Saturday night at Meadowlands Racetrack 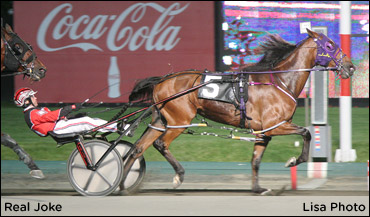 Real Joke and driver George Brennan made the lead in a lukewarm :27.1 opening quarter, then picked up the tempo through middle fractions of :54 and 1:21.1 before cruising home in a final :26.1 panel. Pilgrims Toner (Yannick Gingras) sat a two-hole trip and rallied to finish a length behind in second, while Corky Baran (Dave Miller) grabbed the show spot. Real Joke paid $6.20 as he posted his seventh win in 11 starts this season.

"I got to the top pretty cheap in :27.1," Brennan said. "Once I got there, I wanted to cut [the mile] so I kept him rolling pretty good in case someone wanted to move to the lead. He finished good for me."

Real Joke was claimed for $40,000 on May 8 by his current connections, trainer Lou Pena and the Lightning Lane Stable [John Hospordarek and Eric O'Neill] of Staten Island, New York. An early season standout, he won the $90,000 Clyde Hirt Final under wraps for Andy and Julie Miller in January. 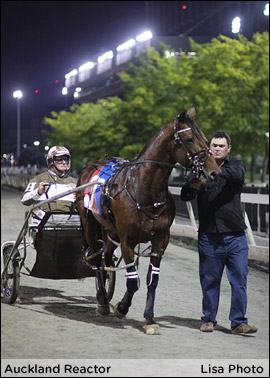 New Zealand champion Auckland Reactor (Brian Sears) fell short in his highly anticipated U.S. debut. Sent off the even-money favourite, he settled into fourth off the gate and began to inch his way first up as the field approached the final turn. Unable to sustain his bid, Auckland Reactor faded to sixth.

"The race went in 1:47.3 and that's a ridiculously fast mile, especially since he hasn't raced in five months or so," said Brian Sears, who was in the sulky behind the star from Down Under. "I felt like I gave him a little shot [to enter contention]. I was able to sit past the half and I just let him kind of pace up first over. I wanted to make sure he was able to come off the gate and he was a little aggressive getting out of there, but he came off the gate fine. It was just too much to ask first start."

Three divisions of the New Jersey Sire Stakes for three-year-old colt pacers were contested earlier in the evening. In pursuit of a training triple, Noel Daley found success only with Ideal Matters, who under the guidance of Brian Sears (five winners on the program) won the $25,500 first division in 1:49.4. The son of Western Ideal commanded the lead past the half-mile marker and accelerated away to a two and a quarter-length tally. Owned by Brittany Farms, Adam Victor and Son Stable, Melvin Hartman and Island View Partners, Ideal Matters is eligible to the $1.5 million North America Cup on June 26 at Mohawk Racetrack and the $1 million Meadowlands Pace on July 17.

Another NA Cup and Meadowlands Pace eligible, Shoobees Place, pulled a 25-1 upset in the $26,100 second division of the New Jersey Sire Stakes. With David Miller in the sulky, he captured his first win of the season in a lifetime best 1:49.2. The son of Artsplace is owned by David McDuffee and trained by Richard Norman.

A J Corbelli and driver George Brennan claimed the $25,500 third division by a neck in 1:49.3. Anatolia Racing Stable owns the son of Rocknroll Hanover. A J Corbelli posted his fifth win in 13 career starts for trainer Jacob Hartline.

The $200,000 New Jersey Sire Stakes Final for sophomore colt pacers is Saturday, May 29.