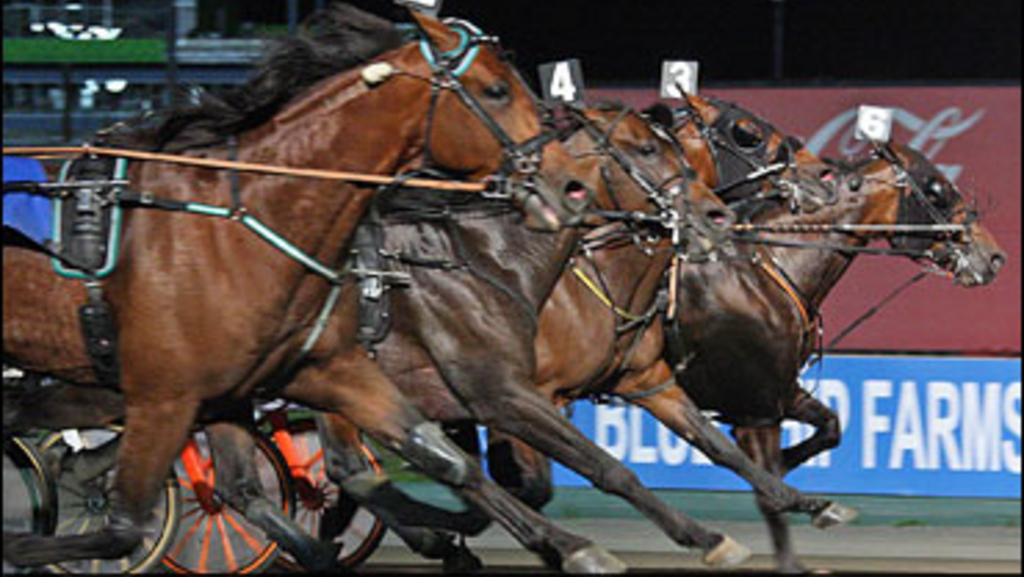 In a four-horse cavalry charge to the wire it was Sevruga who held on to win the $180,000 Arthur J. Cutler Memorial, equalling the stakes record of 1:51 for Team Miller on Saturday night at Meadowlands Racetrack.

Sevruga defeated Guccio and Wishing Stone, who dead-heated for second, along with the late-closing Modern Family in the win photo for his first major stakes victory.

Leaving from post six, driver Andy Miller sent Sevruga to the lead and put up a :27-second opening quarter. As he led the way to the half in :55.2, Undercover Strike (David Miller) advanced first over from fourth with Wishing Stone (Yannick Gingras) following his cover. Undercover Strike engaged the leader in a head-to-head third quarter battle en route to the 1:22.1 marker, but Sevruga shook off that rival into the stretch and then held off the pocket-pulling Modern Family (Tim Tetrick), second over Wishing Stone and late-closing Guccio (Jimmy Takter) in a thrilling finish to establish a new lifetime mark. Defending Cutler champion and favourite Mister Herbie (Jody Jamieson) finished ninth.

"I didn't know if I won it or not, I was just hoping that my horse had his nose out in front right there at the wire," said Andy Miller after the race.

The five-year-old S Js Caviar gelding has won six races while never finishing worse than third in 10 starts this year at the Free For All level for owner Kdm Stables Corp. of Farmingdale, New York.

"He's just gotten bigger and stronger this year going from four to five and we were going to give him a shot," said trainer Julie Miller. "I was so pleased how Andy drove him. He's had a great week. Good things happen when you have a great team like we do."

The husband and wife team of Andy and Julie Miller also won the 2009 edition of the Cutler with another son of S Js Photo, Lucky Jim.

Sevruga, who finished second by a nose to Wishing Stone in his Cutler elimination, paid $16.60 to win the final at odds of 7-1.

His next stakes event will be the Maxie Lee. 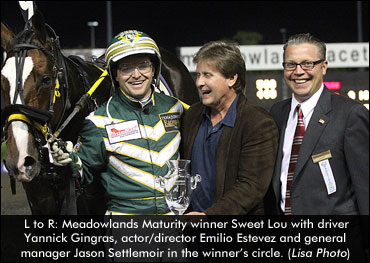 The inaugeral edition of the $100,000 Meadowlands Maturity for four-year-old pacers also produced a tight finish later on the card with Sweet Lou and driver Yannick Gingras getting up to score over Warrawee Needy in the final strides.

Hillbilly Hanover (Andy Miller) fired to the front from post eight with outsider Warrawee Needy (Jody Jamieson) advancing during the :27.1 opening panel. 'Needy' cleared to command into the backstretch before favourite Hurrikane Kingcole (Dan Dube) launched his attack from fifth and rushed by at the :54.4 half-mile mark. Mel Mara (Ron Pierce) was left first over with Sweet Lou following his cover through three-quarters in 1:21.4. Hurrikane Kingcole led the field into the stretch, where Warrawee Needy shook loose and came back on. However, Sweet Lou came charging up on the outside to steal the glory in 1:49 flat. Warrawee Needy settled for runner-up honours while Domethatagain (Tim Tetrick) came on for third.

"Sometimes Hurrikane Kingcole keeps going and you can't get to him, but I took my shot," said Gingras, who has sat behind Sweet Lou's rival on multiple occasions. "I didn't want to be left first up against him that's for sure. He can put up some wicked fractions and I didn't want to get caught up in that."

The victory was Gingras' fifth on the card and third for trainer Ron Burke, who co-owns Sweet Lou as Burke Racing Stable LLC with Weaver Bruscemi LLC, Lawrence Karr, and Phillip Collura.

The Meadowlands also hosted two $25,000 divisions of the New Jersey Sire Stakes for three-year-old pacing colts and a single $45,500 division for the fillies.

Tony Alagna trainees Emeritus Maximus and Wake Up Peter swept the top two spots in the other division. Driven by Tim Tetrick, Emeritus Maximus brushed by his stablemate down the backstretch en route to the 1:50.1 victory. Season-debuting Wake Up Peter (Ron Pierce), the 8-1 fourth choice in Trot's Spring Book, followed three-quarters of length behind while Rockaholic (Yannick Ginras) finished five lengths back in third. The winning Rocknroll Hanover-Eternitys Delight colt, now a perfect three-for-three this year, is owned by Cheap Speed Stable, JL Benson Stables Inc. and Ontario's Alan Alber.

O'Brien Award winner I Luv The Nitelife swept to command after the opening quarter and cruised to a 1:51 triumph in her season's debut. The favoured Rocknroll Hanover-Lisjune filly was driven by Tetrick for trainer Chris Ryder and owners Richard and Joanne Young. She held off the pocket-pulling O Narutac Rockette (Ron Pierce) by a neck. Jerseylicious (Corey Callahan) came on for third.

Once again, the total handle eclipsed the $3 million mark. In fact, the $3,096,914 was an increase of $921,671 from the same Saturday in 2012, with the same number of races. That correlates to an increase of 42 per cent. On-track handle was up both nights, with a final tally of a 10 per cent increase for the weekend.